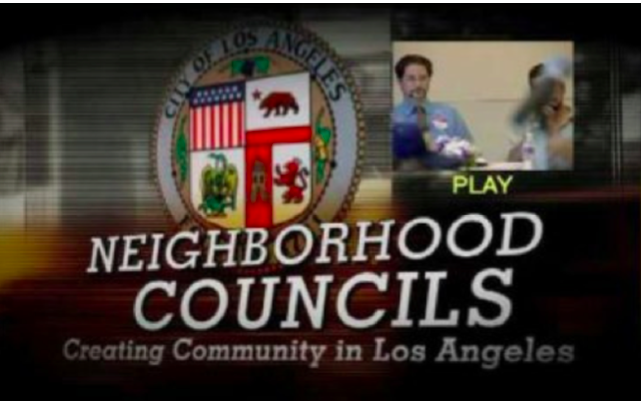 EASTSIDER-The two entities designed to support Neighborhood Councils – DONE and BONC -- now seem to be actively hostile toward them. Should we fix these two entities or dump them?

And is the Mayor willing to help, or is he perfectly happy to watch Neighborhood Councils die the death of a thousand cuts?

Here’s a quick overview. The Neighborhood Council System was voted in as a Charter Amendment in 1999. It created a new system for community members to set up local neighborhood councils within geographic areas not yet determined, and to provide advisory input to the City Council and the Mayor before they voted on City issues. Kind of a “keep ‘em honest” initiative.

I won’t bore you with the history of the Neighborhood Council system. Suffice it to say it has always been controversial, and those in power have labored mightily to make sure that the system is as toothless as they can make it. Just check out past articles on CityWatch, where there are literally thousands you can find using the Search button on the Citywatch website..

What got me thinking about this was the most recent EmpowerLA email blast, on November 15, 2019. It serves as DONE’s electronic mouthpiece. While I couldn’t find an online link, here’s the section that got my attention:

“Our Neighborhood Empowerment Advocate (NEA), Mario Hernandez, recently shared a story that exemplifies the role that the NC system can have connecting the community with members of the City family.

As a result of his frontline work with the NCs he serves, Mario assisted the Central City Neighborhood Partners (CCNP) - an agency that fosters collaborations to benefit low-income communities - in their effort to find organizations to receive professional-grade workout equipment that they were unable to use at their Bixel Street premise. Thanks to connections he had made as the NEA for the Downtown LA Neighborhood Council, Mario knew where the equipment would be of service. Who were the beneficiaries? The Los Angeles Fire Department's (LAFD) Central Bureau received the equipment. It turns out that fire stations have to supply their own fitness equipment. The equipment was distributed to stations across the Central Bureau.

Were it not for the community-based partnership between the Downtown LA Neighborhood Council, the CCNP, and the dedication of the Department’s staff, the LAFD may not have received this much-needed support. Kudos to you all!”

Now I do not personally know Mario Hernandez, and it may well be that he did a swell job in putting these groups together. However, when you think about it, none of this has to do with DONE staff supporting the 99 Neighborhood Councils. Which is what they actually get paid to do.

What I do know about Mario Hernandez has to do with his sending a letter to the Lincoln Heights Neighborhood Council mandating that their Board attend a training session, featuring an extensive handout prepared by him, and not coincidentally, presented by his very own self. Nowhere to be found was a City Attorney, a Supervisor, or any indication that the document had been vetted by DONE itself before being thrust upon the Lincoln Heights Neighborhood Council as gospel.

The reason I found all this fascinating, is that I attended the beginning of that meeting, discovered that his letter to the LHNC Board was not available, and sent off a public records request for a copy of that letter. I sent that request to the President of the LHNC on November 6 and am still waiting for a response.

Further, I discovered a CityWatch article from May 2018, which describes the antics of one Mario Hernandez, who evidently acted as judge and jury in refusing the Los Feliz Neighborhood Council’s  intention to submit a grant application to DONE. You can find the article here.

After a scathing letter to then DONE General Manager Grayce Liu over Mario’s actions, no direct response was forthcoming. However, she issued a three-page policy guideline entitled, “Role of the Neighborhood Empowerment Advocate.” It stands as a masterpiece of bureaucratic bullshit which should be in the library of all Neighborhood Councils. Check the link buried within the CityWatch article, because you won’t find the memo to staff anywhere else.

DONE is not alone. In a previous email blast from DONE dated November 8, 2019, we find the following:

It basically underscores and implicitly approves of BONC’s attempt to reign in those rascally unpaid advisory Neighborhood Council folks and beat them into submission or else.

I would point out that there is no mandatory training program for elected City Councilmembers, or the Mayor, or the City Attorney. And they sure as hell are a lot more than advisory. For sure there is no removal process; witness the fact that CD14’s Jose Huizar has had his home, office, and other places visited by the Internal Revenue Service and the FBI. Yet he’s still knockin’ down his $200k per year, isn’t he?

And “just because,” I can’t help pointing out that in 2011, Mayor Antonio Villaraigosa was fined $123,500 for taking a lot of free tickets to very expensive events. His excuse? He wasn’t trained.

It’s a case of proportionality, and regarding Neighborhood Councils, there simply isn’t any. They have a lot more controls placed on them by DONE and by BONC than the LA City Council does. And what about those BS “conflict of interest” rules handed out by DONE like they were felonies when violated.  C’mon, let’s get real. We know who the felons are in this deal.

BONC is comprised of Mayoral appointees who “serve at the pleasure” of the Mayor, sorta like Foreign Service Ambassadors “serve at the pleasure” of Donald Trump. Similarly, for failure to kiss the imperial you know what, they can be and are replaced. So when the Mayor’s folks blow in the ear of DONE and/or BONC you can just see the system’s integrity on full display. All hail to the King.

Think about this: Censure and removal from an elected Board which itself is advisory? Unpaid, no hazard pay, and for stakeholders that were crazy enough to go out and try to hold the elected officials feet to the fire? Give me a break. And this madness seems to be the long-standing wet dream of Commissioner Len Schafer, who tells everyone about how he is a lawyer.

The public record reveals that Len hasn’t had a bar card since the 1980s.

Again, the BONC is upside down. In the beginning, they were there to take care of boundaries and establish Neighborhood Councils, and get the elections done. Now, they’re like some alien kangaroo court. Get tossed out for violating their “code of civility”? For god’s sake, just ask the City Council about this muzzling the troops deal. I don’t think they have won a court case yet over their sanctioning public stakeholders over public comment.

BONC and DONE should be assisting the 99 Neighborhood Councils in meeting their Charter-mandated purpose of trying to keep City Hall honest. God knows that’s a really big job, and these two entities aren’t doing a darn thing to help, but rather the reverse.

Instead, we get a complaint from Los Feliz NC against Mr. Hernandez that goes nowhere, and ultimately produces a pablum “be nice, staff” document from Ms. Liu that’s so embarrassing that it gets buried where no one can find it. Or repudiate it.

The current reality is that BONC and DONE and the DONE staff work to control the NC system, not support it. Same for the City Clerk and their recent Neighborhood Council elections. Stakeholders had to go through more crud than the 72 brave souls who are running for City Council in 2020.

If DONE and BONC can’t help, dump them. The only real hook the City has is that darned $37,000 or so. For those who do not know, this is the annual amount the City “gives” each Neighborhood Council to both cover their costs (rent, bills, internet. translation, etc.) and to allow them to give a few modest grants to nonprofit community organizations and events.

Guess what? Get rid of it. Then DONE has absolutely no meaningful say in how Neighborhood Councils run. Think about it. No fake grievance system, no mandatory training, no interference. no roll call votes on advisory only matters.

We could have a Neighborhood Council system that actually speaks truth to power and calls out the 15-0. Most City Council votes just happen to be unanimous even though they claim they don’t really talk to each other in private (also against the law). That’s patently dog doo..

Lest you think I am simply a curmudgeon (well, maybe a little), here is why all this is of such importance. Right now, we have 72 candidates running for office in the 2020 City Council District elections, for the districts with even numbers. Absent something, we will wind up with the usual cast of suspects, like Kevin DeLeon, who will happily step into the legacy of Jose Huizar, until and unless he too gets caught.

For those who don’t follow politics, Councilmember Huizar was recently visited by the IRS and the FBI at his offices, home and other places. While currently unindicted, the Council stripped him of all his committee memberships, and he is rarely seen. For his part, replacement hopeful Kevin DeLeon’s signature legislation as Speaker pro Tem in the California Senate, was the gas tax bill that we now “enjoy.”

We will see if the status quo will continue to stumble along long enough for our new General Manager to complete her listening tour and decide what to do with the mess.