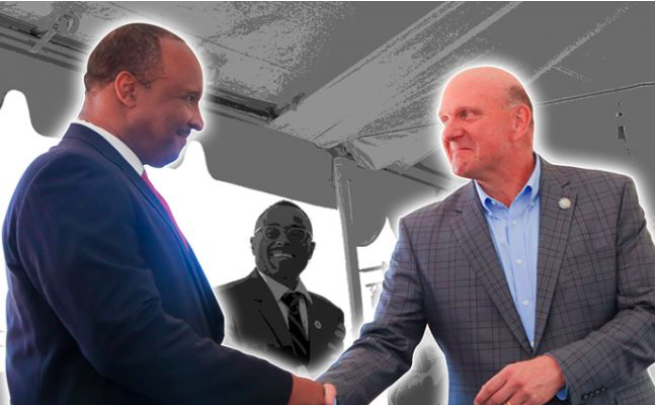 SOUTH OF THE 10-The year was 2015 and talks of the NFL coming to Inglewood were brewing. SB Strategies, helmed by Steve Bellheumer, was tasked with putting paid canvassers on Inglewood streets to solicit support for the return of the NFL.

What residents didn’t know, was our signatures, on a thinly worded petition, would take away our voting power, and the city knew they could take our signatures and vote in the NFL stadium, with no community input.

Fast forward to 2019 and this same scheme is being used to advance a proposed Clippers arena.

Both the owners of the NFL project and Murphy’s Bowl, have donated hundreds of thousands of dollars to the re-election of Mayor Butts and loans given to Councilman George Dotson. Those loans have launched an investigation.

The same councilman was fined for accepting Rams tickets.

What are they accepting from Steve Ballmer behind the scenes?

A flyer began circulating, via Donald Perry of the Southbay Workforce Investment Board, offering $19 per hour to canvass the city to field support from the residents.

2UrbanGirls spoke to Mr. Perry who offered this.

When asked why a resume is necessary for a canvassing petition, Perry went further.

2UrbanGirls hopes residents will take the easy job and convince residents to NOT SIGN it and tell the Clippers go buy another city.

City Clerk Yvonne Horton has now exposed herself as to providing faulty election costs to not hold elections in March, like other South Bay cities, but had them moved to November 2020. Surely none of these jokers would be re-elected as they continue their quest to destroy the city of Inglewood via traffic congestion and substandard air quality.

These coordinated efforts should be considered illegal and investigated appropriately. It is well known that nonprofits are to stay clear of political efforts as evidenced by their changing the job flyer removing the Clippers name and that the job entails advocating the Clippers arena project.

This latest stunt reeks of Mayor Butts desperation to continue the advancement of corporate interests and not the desires of Inglewood residents.