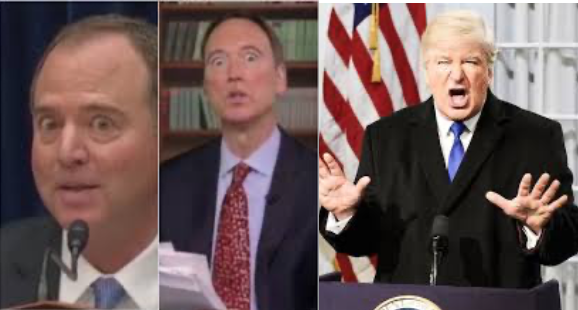 ALPERN AT LARGE--True to form, and as I've stated in a recent CityWatch article, President Donald Trump continues to poke the other side, and encourages calls for his ouster, and House Representative Adam Schiff continues to be unprofessional, and appears to be doing his best (unwittingly so, of course) to ensure Trumps’ political survival.

That may bother many reading this, but so long as a person says, "My side is fine, but your side is wrong!" then that person ends up proving me sadly, very sadly, correct.

Pretty awful, and to no one's surprise, President Trump's greatest supporters are collectively screaming in horror.

House Intelligence Committee Chair Adam Schiff urging California Democrats in Long Beach to help defeat that charlatan in the White House (LINK: Yeah, THAT will help his own credibility, and ensure the likelihood of the impeachment he clearly has concluded is legal and necessary.

And the BIG question: How many Senate Republicans (even beyond Never-Trumper Mitt Romney) would otherwise conclude to throw Trump out (lots of Republicans are sick of his antics, even if they acknowledge the Dow Jones at an all-time high, and unemployment at an all-time low), but can't do so based on the hyper partisan manner that Schiff is going after Trump?

Which doesn't mean that impeachment hearings shouldn't proceed...but it does lend credence to the conclusion that Schiff is the WRONG guy to be doing it.

So...is Schiff the President's worst enemy, or his best friend?

So, can Republicans acknowledge that the President's actions are impeachable, or just unworthy of presidential demeanor (but not worthy of impeachment, just of being a one-term President)?

So, can Democrats acknowledge that the President's actions are unworthy of presidential demeanor, and arguably worthy of not being re-elected, but not impeachable, or do they fit the bill of "high crimes and misdemeanors"?

I suppose this "Jerry Springer Show" action is a Christmas present to the cable news networks, but it's questionable that it's good for the collective sanity of our nation.

So...is the best thing to do to tune out and focus on your personal life, family, and/or career?

Because the decision to tune in, take sides, and presume there's a "good guy" in all this is the most delusional, diversionary, and dangerous conclusion of all.