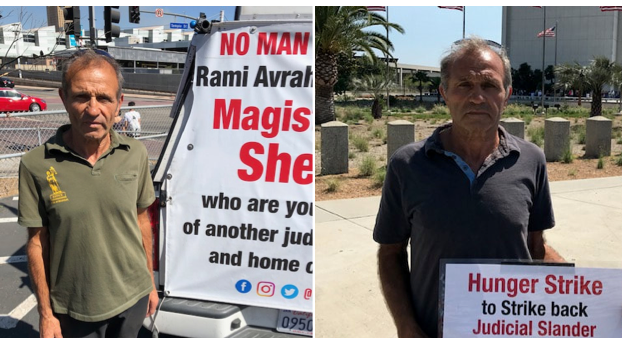 VOICES-Natan “Rami” Avraham, a Los Angeles resident of over 30 years who is a plumber by trade, continues his hunger strike, which began in 2017 to protest bias, unconstitutional actions and defamatory statements by then Los Angeles Commissioner / Judge Matthew St. George. Mr. Avraham filed a civil suit for damages in 2018, based on the defamatory statements by St. George, which included comments that Mr. Avraham was a potential terrorist and threat to society.

These statements have directly affected his life, his business, and the lives of his children. California District Magistrate Sheri Pym dismissed this suit out of hand, despite a formal letter acknowledging St. George’s actions from the Commission on Judicial Performance, which did not act on the matter.

Additionally, there was clearly missing evidence from the materials Pym was given, with no explanation as to why or how pages central to Mr. Avraham’s case went missing. Magistrate Pym then cancelled the hearing she herself set without seeing this missing evidence, denying Avraham his day in court, and any recourse to fight.

Natan “Rami” Avraham has dedicated himself to fighting against what he feels is clear judicial bias, intimidation, overreach and slander against his person and attacks on his First Amendment and Civil rights by Commissioner Matthew St. George, and the latest attack on due process and civil rights by Magistrate Sheri Pym. His hunger strike is ongoing and has continued at the Edward R. Roybal Federal Building and United States Courthouse: 255 East Temple Street Los Angeles, CA 90012-3332.

The original basis for Mr. Avraham’s hunger strike is the unforgivable bias Matthew St. George showcased during divorce hearings when he baselessly accused Mr. Avraham of being a person who was likely to commit mass murder after Avraham put protest placards on his plumbing van. According to the court reporter’s transcript, the following statements were made by St. George (from page 10 of the transcript from Sept 3rd, 2015):

“And if he wants to spend his time driving around town, he’s free to do so. He can put a placard up wherever he wants. But I want him to know this. I am considering having sheriff patrols around my house because people like him are a threat to society.

We’ve seen it on the news every day. Everybody says, oh, they are just a little crazy. Yeah, and the next thing you know they get a gun and shoot a lot of people or kill my family. What am I supposed to do? I’m doing my job. So Mr. Avraham should know that I’m considering getting a sheriff patrol, and should he come anywhere near my house – I’m not telling where I live. I live somewhere in Los Angeles -- If he comes by my house he will be detained and possibly arrested.” – Commissioner Matthew St. George

At no point during the proceedings, nor at any point in his life, did Mr. Avraham make any statements even remotely threatening to anyone. At the crux of this matter is the irreparable damage done to Mr. Avraham’s reputation and standing, which reflects on his personal life and family name, in addition to losses in the sums of millions from St. George’s orders to sell family properties in Los Angeles. He does not want to see this unfounded statement reflect badly on his three children, nor does he want monies taken from their future inheritance.

Mr. Avraham took every possible step to have Commissioner St. George either removed from the hearing or have him recuse himself from the case, as he was clearly compromised. His immunity as a judge should be revoked, because he has abused his position and violated Mr. Avraham’s Constitutional rights. However, the LA Supreme Court has officially stated they find nothing wrong with St. George’s shameful actions and statements, and this corruption and protection of their own has continued with the actions of Magistrate Sheri Pym. It appears that the courts have put protection above principle, to avoid having Mr. Avraham’s case on record, and to sanction slanderous statements by a sitting judge.

Avraham will continue his hunger strike until there is an investigation into the ruling of Magistrate Sheri Pym, and a formal acknowledgement of the wrongdoings of the court against Mr. Avraham and his family. That will allow Mr. Avraham to proceed with his civil case in the hope of repairing his reputation and retrieving the damages for his children.

Mr. Avraham will not stop this fight and is dedicated to protecting his civil rights in the face of corrupt establishment opposition. He is relying on the media to raise awareness to the public and protect citizens against the abuses of the state.

WHAT: Hunger Strike for Civil Rights by Rami Avraham