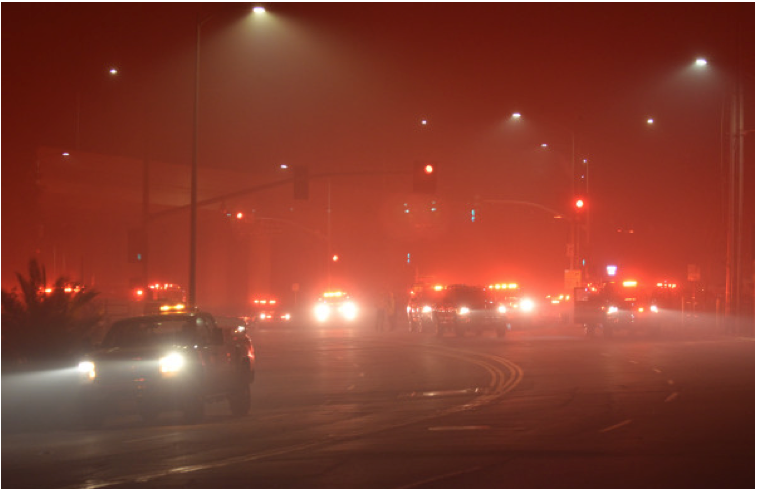 EASTSIDER-During our recent fires that seemed to consume most of California, one utility company stood out. LA City’s Department of Water & Power kept our lights on.

The most troubling aspect of the recent fires was the unpredictable and intermittent shutting off of all electricity to you and me. I can personally attest to this, as I was up in Tehachapi (Stallion Springs, to be exact), and had the dubious pleasure of a generic “we may turn off your electricity with no notice over the next two days” from Southern California Edison.

And they did, with no notice except the lights went out. At night. More than once. I am told the same went for most people in Southern California, not to mention a couple of million folks in Northern California who are serviced by PG&E.

Most of us, me included, did not have back up electricity, be it by battery or generator, and frankly, it sucked. In Tehachapi there was only one gas station with a generator to even get gas, and the only way to find it was to get in a car and drive around.

I do understand the need for avoiding fires -- at our house at the edge of the mountain, the morning winds on the first day were gusting to around 50 an hour, and a couple of days later a neighbor inadvertently set fire to his house while checking on the gas level of his generator. During high winds, of course.

And oh yes, the 14 Freeway South was closed so I couldn’t get back to LA. The perfect storm.

While the DWP is a lot smaller and compact than the investor-owned Utilities like PG&E, SoCal Edison, and SDGE, they do run a lot of high voltage power lines, some of them all the way up into the Northeastern United States.

What they did during the recent fires, unlike the other utilities, was to make a conscious decision to keep the power and the lights on; no intermittent shutting off our electricity. That was a huge blessing for all of us in LA. Trust me, Tehachapi was a hot mess, as was most of the rest of the state, with literally millions losing juice and/or having to evacuate.

At the same time, there were a couple of lessons learned by DWP during the fires that we need to heed to in the future.

First, look at what actually caused the Getty Fire, the one fire involving the DWP itself. According to the DWP’s own investigation, the Getty Fire was not caused by the Department. Rather, as they recounted in a recent CityWatch article,

“Based on the investigation, LAFD has stated that the fire was likely caused by a tree branch that broke off during the high wind conditions and landed on nearby power lines, which resulted in arcing and sparking that ignited nearby brush. Investigators are working to determine the ownership of the land occupied by the tree.

During the preliminary investigation, a dried Eucalyptus branch was found by investigators hanging from telecommunications lines located below LADWP power lines near 1901 N. Sepulveda Boulevard. The branch is believed to have blown into LADWP wires from a tree located approximately 30 feet from the utility lines. This distance is outside of the vegetation clearance and setback distance required by state regulations.”

It should be noted that the DWP itself had cleared all brush within the statutory distance from the power line itself. I don’t know if this was true for the investor-owned utilities.

I can see a field day for lawyers with lawsuits, countersuits, jurisdictional fights, and a clogged-up court system even as the insurers drag their feet. Groovy.

And Then There’s the Mayor

The second issue raised by the fires is exactly how the DWP was able to keep the lights on and provide us with power throughout the high wind events. Turns out that the very gas-powered plants the Mayor wants to eliminate in his Green New Deal Plan made the difference.

Witness the following: At the latest DWP Committee meeting, we were graced with the presence of Andy Kendall, the DWP “get your hands dirty” Co-Manager of the Power side of the Department. He minced no words to the group, indicating that at the height of the fires, DWP was one power line away from initiating rolling blackouts for all of us.

That’s right, one power line. And those lines were the very Scattergood/Haynes/Harbor gas operated power plants that the Mayor, in his long-term (read, after he terms out) wonderful plan to get to Zero Emissions, are to be scrapped. That’s right, scrapped. So the next time the lights can go out.

As the LA Times noted this past February:

“Natural gas accounted for 31% of the city’s power supply in 2017, with much of that generation coming from Scattergood, Haynes and Harbor. DWP managers had argued in recent months that those three facilities in particular are critical to keeping the lights on for the city’s 4 million residents, especially on hot summer days with the highest electricity demand and during outages elsewhere on the power grid.”

How about that, Mr. Mayor? What’s your spiffy plan to keep the lights on?

Daniel Kegel nailed it when he recently wrote in the Larchmont Buzz: “LADWP is Replacing Local Power Plants. . .But with What?”:

“As always, one big issue for replacing any power plant is just how environmentally friendly to make the new plants. . .which is something that could affect Angelenos in surprising ways. For instance, if we try to replace too many units at once, or use unproven technologies, expensive problems could pile up (which means higher bills and wasted money, or even power outages). Or if we build a new fossil-fueled unit, we might have to shut it down less than 20 years after completion to meet the state’s clean energy timeline, which could also waste a lot of money.”

By the way, it’s a very good article and you might want to read it in its entirety.

We are lucky to be a part of DWP instead of the other investor-owned utilities. Take a look at Jack Humphreville’s article this week called, “DWP v. PGE.” These are the kind of losses which produce bankruptcy and endless lawsuits, with the State of California holding the bag.

Not so with the DWP, where all we have to worry about is the Mayor and the City Council funding every dumb idea they have out of the DWP treasury so that it’s off the City books -- which are pretty bad -- and we ratepayers still get to pay through our DWP Bills.

No, our problems are straightforward. Biggest one is to make sure that the gas fired plants like Scattergood, Haynes & Harbor remain available (or at least Scattergood) to provide that 24/7 reliability to avoid blackouts that the other utilities give out to the public like chiclets. Maybe even go to a number of new smaller higher efficiency quick start gas fired plants?

And finally, IMHO, someone is going to have to look into brush clearance regulations. A 30-foot clearance, which works during normal weather patterns, is simply not designed for 60-80 mph wind events. Witness the Getty fire.

All in all, a big attaboy for the DWP.

(Tony Butka is an Eastside community activist, who has served on a neighborhood council, has a background in government and is a contributor to CityWatch.) Photo: Daily News. Edited for CityWatch by Linda Abrams.