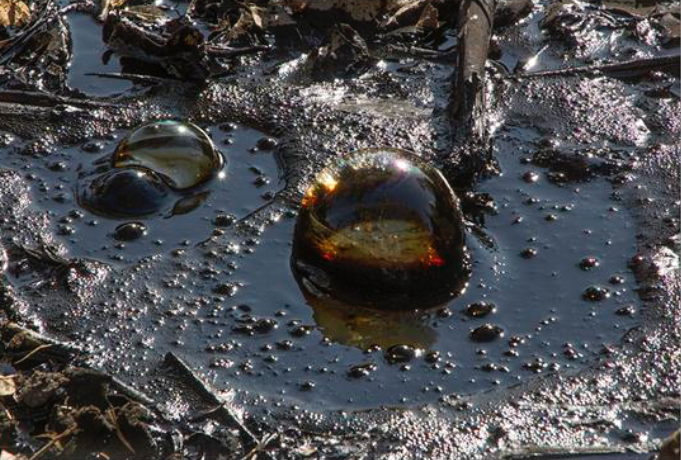 PLANNING WATCH--Real estate interests have sucked up so much of the oxygen at LA’s City Hall that patently false predictions about an impending LA’s population boom continuously pop up  – like methane bubbles at the LaBrea Tar Pits.(Photo above: Methane bubble at the LaBrea Tar Pits: A picture-perfect metaphor for the perpetual forecasts of a Los Angeles population boom.)

Inflated Population Forecasts:  LA’s adopted plans are littered with population forecasts that wildly overestimated LA’s future population.  The first General Plan, the 1970 Centers Concept, predicted that Los Angeles would surpass 5,000,000 people shortly after the year 2000.  Since then the best known population forecast is in the General Plan Framework Element, now stripped of its index and Environmental Impact Report at City Planning’s new, but hardly improved, website.  Prepared in the early 1990s, then adopted in 1996 and 2001, The Framework predicted that LA’s population would reach 4.3 million people in 2010.  Lo and behold, the 2010 census revealed that LA’s action population was only 3.75 million people, or 550,000 below that forecast number, and 1,250,000 people short of the 1970 forecast.

Since then, according to demographer Wendell Cox, there have been at least three claims that LA’s population has broken through the 4,000,000 mark, all of them false.  For example, in 2010, the same year as the Federal Census, the California State Department of Finance declared that LA’s population had reached 4.1 million. 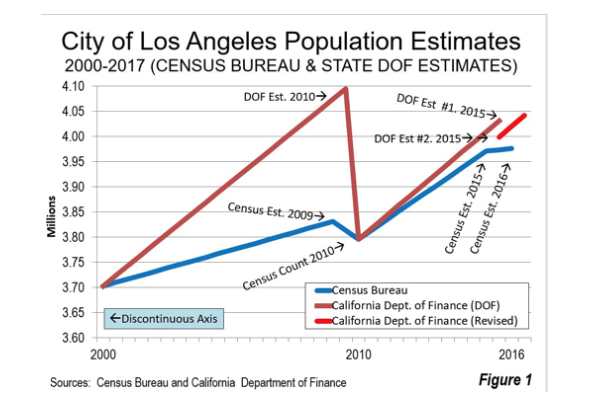 Now, in 2019, City Hall has finally faced the facts and listed LA’s population at 3,940,000 people, probably close to what the 2020 census will find. Nevertheless, some on-line City sites still claim that LA’s population has exceeded four million people.

Why is LA’s population boom always around the corner, without ever arriving?  Part of the answer is a simple regression line, the naïve extension of past trends into the future.  This methodology assumes that LA’s growth in the era of cheap agricultural land – instead of urban infill – will go on and on. 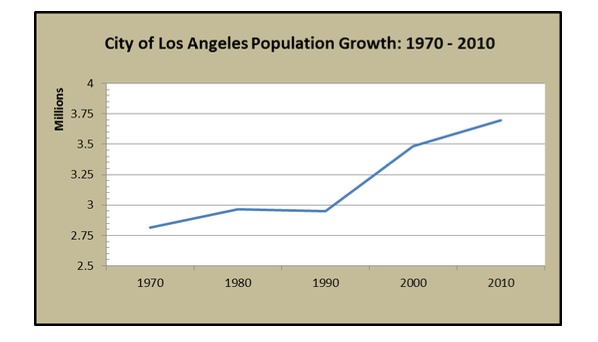 The other reason is the search for justifications that allow City Hall to hand out profitable quid-pro-quo zone changes to the real estate industry.  By now, these rationalizations are painfully familiar, such as the claim that LA does NOT have sufficient zoning for the masses of people who will soon move here.  This tall-tale overlooks the obvious, that LA’s existing zoning could support a population of 6.9 million people, and this figure would reach 9,000,000 if augmented through the City’s density bonus ordinances, like TOC Guidelines.

The Atlantic Magazine and Bloomberg News have told us why the other part of this repeated claim is also bogus.  Los Angeles has joined New York City and Chicago as U.S. mega-cities whose populations are declining.  According to both publications, Los Angeles loses, on average, 201 people each day, for an annual net loss of 73,000 people.  If this trend continued for the entire decade, LA could soon return to its 1995 population of 3.25 million people.  Would it ever reach the 4.3 million people the General Plan predicted for 2010?  This is as likely as City Hall officials or Departments acknowledging the latest Bureau of the Census population decline data.

The Underlying Population Dynamics:  Given this loss, not gain, in population, how we then can we account for LA’s current building boom and paradoxical increase in homelessness?  In LA “supply and demand” are hopelessly mismatched.  The glut of new housing for well off tenants has spawned high vacancy rates, not the creation of low-income housing through supply and demand.   The Census Bureau now reports 110,100 vacant housing units in Los Angeles, or more than twice the size of LA’s homeless population.  But, the latter cannot afford the high rents of the vacant apartments, and the investors and managers of buildings with vacant units cannot afford to slash rents to meet the low incomes of people living in cars, shelters, tents, alleys, and sidewalks.  Instead the investors opt for flipping, AirBnB, holding out for a market turn-around, and piling on amenities to better compete for well-off tenants. 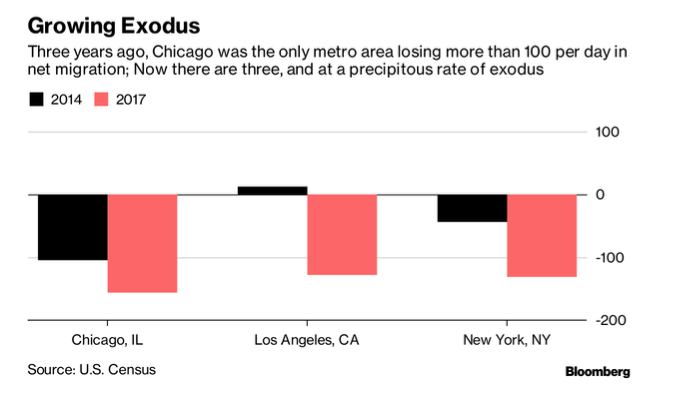 The rest of the story about LA’s declining population has been explained in the Atlantic’s Why are America’s Three Biggest Metros Shrinking?

What are the practical implications of this population decline?  First, consistent with the intent of 2017’s Measure S, Los Angeles should quickly update its entire General Plan to reflect this new demographic reality, especially in the context of the region’s earthquake and climate threats and its steadily deteriorating infrastructure and public services.

Second, instead of gimmicks to increase zoning for the benefit of real estate investors, Los Angeles should utilize the timely update of its General Plan, including the 35 Community Plans, to down-plan and down-zone.  This approach would reflect its declining population and frail infrastructure.  This down-zoning process presents two additional benefits.  First, it could give Los Angeles a breather, during which it can repair and upgrade its collapsing infrastructure and public services.  Second, downzoning will force developers to more frequently use density bonuses to build larger, taller buildings.

Third, density bonuses require inclusionary low-income housing.  To make sure this affordable housing reaches those in most need, City employees must regularly inspect it on-site.  This will finally ensure that pledged affordable units exist and are occupied by qualified low-income tenants.

The time has come for City Hall to stop pulling the wool over its own eyes.

(Dick Platkin is a former Los Angeles city planner who reports on local planning issues for CityWatchLA.  He serves on the board of United Neighborhoods of Los Angeles (UN4LA) and welcomes comments and corrections at [email protected].  Selected previous columns are available through the CityWatchLA archives and the Plan-it Los Angeles blog.)