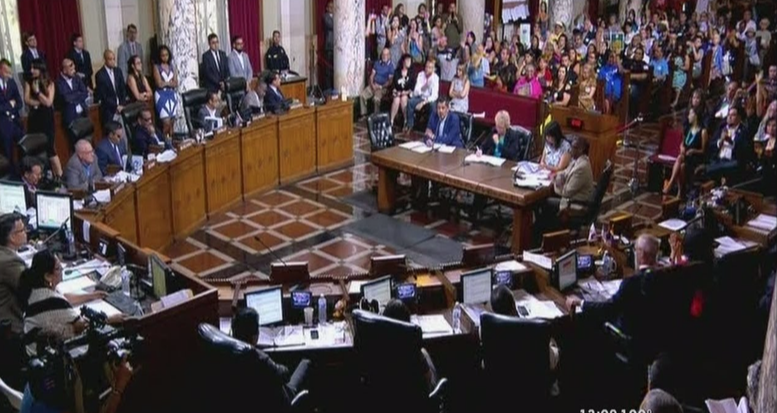 For one thing, several hundred people sat around in the courtyard of the City Hall waiting for the truck containing lunch to arrive. An hour went by. This eventually got solved, and things proceeded more or less normally for the rest of the day.(Photo above: an LA City Council meeting.)

For me, the big event was the chance to take a position in opposition to our City Council members taking money from developers.

The opportunity was officially referred to as the Congress of Neighborhoods General Assembly. The GA had a one item agenda, a resolution which could be voted up or down by those in attendance. Here is the resolution:

Motion: City Council representatives and city elected officials and candidates for these offices shall not accept funds from real estate developers.

Notice that this is only a statement of principle. It has no legislative authority. It merely represents the views of those who voted in its favor at the time. Still, the clear intent was to let our candidates and elected officials know that we will recognize (and resent) them being beholden to the big money interests when it is to the detriment of the public good. It’s also no secret that this topic is one of the most commonly discussed here on CityWatch.

The process involved the statement of the motion followed by an open comments session available to all those in attendance. We heard from those who were in favor, those who were opposed, and those who wanted the motion to go even further. It was explained that under previously agreed upon ground rules, there was no provision for amending the motion. We did, however, invite people to come to the Los Angeles Neighborhood Council Alliance and bring these points up, or alternatively to bring them up at their own neighborhood councils or regional alliances.

Here is the final vote of those present and raising their hands:

I should like to add that in my opinion, those who participated (including those who listened to the debate) were respectful to both sides and made their positions known at the end by their show of hands. I would also like to thank the organizers for allowing me to introduce the motion and preside over the debate and the vote. Additional thanks to Daniel and David for their assistance.

The Wire Frame for a system of neighborhood council emergency preparedness

We’ve discussed the idea of neighborhood councils setting up programs to educate their residents in terms of emergency preparedness. The plan was introduced in the morning session of the congress. Conrad Starr, Jesse Marquez, the city’s Emergency Management Department, and yours truly contributed to the discussion. Within a couple of weeks, we expect to have a substantial online presence available to all neighborhood council participants so that we can all network.