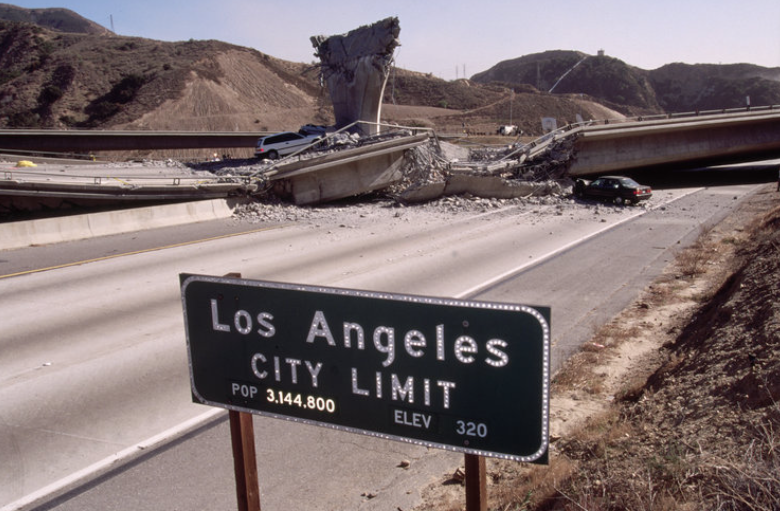 WE ARE THIS CLOSE--Had the recent 7.1 earthquake and other ongoing seismic shocks hit less than 200 miles northwest of Ridgecrest/China Lake, ten million people in Los Angeles would now be under an apocalyptic cloud, their lives and those of the state and nation in radioactive ruin. (Northridge quake in 1994.)

The likely human death toll would be in the millions. The likely property loss would be in the trillions. The forever damage to our species’ food supply, ecological support systems, and longterm economy would be very far beyond any meaningful calculation. The threat to the ability of the human race to survive on this planet would be extremely significant.

Their cores would be melting into the ground. Hydrogen explosions would be blasting the site to deadly dust. One or both melted cores would have burned into the earth and hit ground or ocean water, causing massive steam explosions with physical impacts in the range of Hiroshima and Nagasaki. The huge clouds would send murderous radioactive isotopes into the atmosphere that would permanently poison the land, the oceans, the air … and circle the globe again and again, and yet again, filling the lungs of billions of living things with the most potent poisons humans have ever created.

Now in bankruptcy, with its third president in two years, PG&E is utterly unqualified to run two large, old, obsolete, crumbling atomic reactors which are surrounded by earthquake faults At least a dozen faults have been identified within a small radius around the reactors. The reactor cores are less than fifty miles from the San Andreas fault, less than half the distance that Fukushima Daiichi was from the epicenter that destroyed four reactors there.

Diablo cannot withstand an earthquake of the magnitude now hitting less than 200 miles away. In 2014, the Associated Press reported that Dr. Michael Peck, the Nuclear Regulatory Commission’s site inspector at Diablo, had warned that the two reactors should be shut because they can’t withstand a seismic shock like the one that has just hit so close. The NRC tried to bury Peck’s report. They attacked his findings, then shipped him to Tennessee. He’s no longer with the Commission.

All major reactor disasters have come with early warnings. A 1978 accident at Ohio’s Davis-Besse reactor presaged the 1979 disaster at Three Mile Island. The realities were hidden, and TMI spewed radiation that killed local people and animals in droves.

Soviet officials knew the emergency shut-down mechanism at Chernobyl could cause an explosion — but kept it secret. Unit Four exploded the instant the rods meant to shut it down were deployed.

Decades before disaster struck at Fukushima Daiichi, millions of Japanese citizens marched to demand atomic reactors NOT be built in a zone riddled by fault lines, washed by tsunamis.

In California, ten thousand citizens were arrested demanding the same.  Diablo’s owners hid the existence of the Hosgri Fault just three miles from the site. A dozen more nearby fault lines have since been found, capable in tandem of delivering shocks like the ones shaking Ridgecrest. No significant structural improvements have been made to deal with the newfound fault lines.

The truly horrifying HBO series on Chernobyl currently topping all historic viewership charts shows just a small sample of the ghastly death and destruction that can be caused by official corruption and neglect.

Like Soviet apparatchiks, the state of California has refused to conduct independent investigations on the physical status of the two Diablo reactors. It has refused to hold public hearings on Dr. Peck’s warnings that they can’t withstand seismic shocks like the ones now being experienced so dangerously nearby. If there are realistic plans to evacuate Los Angeles and other downwind areas during reactor melt-downs/explosions, hearings on them have yet to be held.

In the wake of the 2011 explosions at Fukushima, the NRC staff compiled critical reforms for American reactors, including Diablo. But the Commission killed the proposed regulations. So, nothing significant has been done to improve safety at two coastal reactors upwind of ten million people that are surrounded by earthquake faults in a tsunami zone like the one where the four Fukushima reactors have already exploded.

There are no excuses. These seismic shocks will never stop. Diablo is scheduled to shut in 2024 and 2025. But massive advances in wind, solar, batteries and efficiency have already rendered the nukes’ power unnecessary. A petition demanding Governor Newsom and the state independently investigate Diablo’s ability to operate safely is at www.solartopia.org.

That petition began circulating before these latest quakes. The continued operation of these two reactors has now gone to a whole new level of apocalyptic insanity.

(Author/Activist Professor  Harvey Wasserman hosts California Solartopia at KPFK-Pacifica, in Los Angeles, and the Green Power & Wellness podcast at prn.fm. He is author or co-author of 20 books, including Solartopia! Our Green-Powered Earth and History of the United States. Professor Wasserman lives in both Los Angeles, CA and Columbus Ohio.)