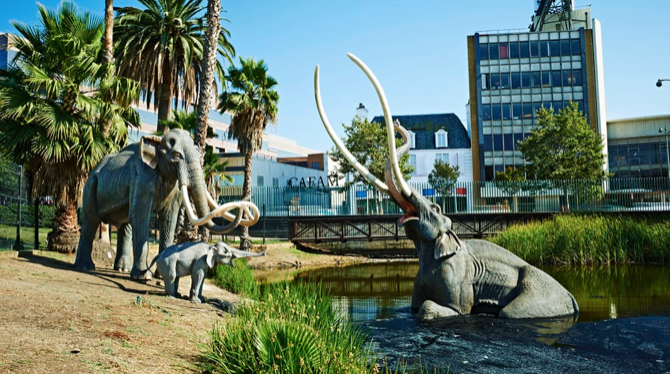 DEEGAN ON LA-Eureka! Oil was discovered! And with it came tar and the resulting “tar pits” that have captured samples of an age that continues to be discovered in the “gateway back to the Ice Age, right in the heart of LA.”

This is how the Natural History Museum of Los Angeles County describes the tar pits and the George C. Page Museum of La Brea Discoveries, which is their outpost on the Miracle Mile’s Museum Row.

It started as a forty-five-hundred-acre Rancho La Brea land grant to the Antonio Jose Rocha family in 1852, which included today’s Miracle Mile and parts of West Hollywood and Hollywood. It would eventually wind up as today’s twenty-three-acre Hancock Park, the green space surrounding the Page Museum and LACMA. The area received its name from lawyer Henry Hancock, who worked seven years for the Rochas to legalize their challenged land grant.

When the legal fees busted the Rocha family, Hancock was there to buy up the property at a discount and became the owner of the La Brea Tar Pits, along with the surrounding green space. A Hancock descendant, George Allan Hancock, donated 23 acres of the property to Los Angeles County in 1924, which he named Hancock Park, with a stipulation that tar pit fossils be preserved and exhibited. The residential neighborhood a few miles east of Hancock Park, also called Hancock Park, was developed by the Hancock family.

Today, 12 acres of Hancock Park (the original) is home to the George C. Page Museum of La Brea Discoveries. It and Hancock Park are being “reimagined” by the Natural History Museum which has commissioned three noted architectural firms to present their visions of what the park and museum could become.

The proposals are comprehensive and stress science equally with the visitor experiences in the museum and in the surrounding park.

Hancock Park, by itself, is a valued community resource that serves the thousands of neighbors that can walk just a few blocks to enjoy it. That includes 12,000 residents of the adjacent Park La Brea housing complex, saturated with families with kids, and 7,500 from the homes between Wilshire and Olympic, Fairfax and San Vicente (as counted in the 2010 census).

What happens to “their” park is very important. Other than the massive Griffith Park (five times the size of New York’s Central Park), Los Angeles, on a per capita basis, is park poor. Every bit of green that can be claimed from our underlying desert is highly valuable, as is every single tree that provides shade, which is something that our ubiquitous and signature palm trees do not offer.

Fortunately, the trio of architects seem to understand this in the “park” portion of their reimagination plans. They offer lush plantings derivative or reminiscent of Ice Age species, with one firm going so far as to promise trees that would afford “dappled” sunlight.

Turning to their visions for the museum building itself, the park space will be either impacted or improved depending on the architect. One of them wants to “stack” a few floors onto the existing building’s footprint and include a public “Tar Bar” and ''roofpark” as a way for visitors to engage in leisure and enjoyment. They also want to build a new “garden roof” over the existing parking lot as a  way to expand the park space.

Another proposal offers building an addition to the current museum, eating up valuable park space.

At least one firm misunderstood LA’s love for the iconic elephant family situated in the tar pit lake by suggesting that the mammoths be moved indoors.

Considering their Museum Row neighbors, the chrome and bright red exterior of the Petersen Car Museum, the futurist bubble dome of the Academy’s Movie Museum, and the teardrop form of LACMA’s bridge over Wilshire that will house its permanent collection, the tar pits museum must be bold and stand out as dramatically as the other three. It should be part of the whole Museum Row experience where visitors can enjoy exhibitions about cars, movies, art, ice age discoveries and crafts and folk art.

Visitors flying on low-level approach into Los Angeles will be able to look down at the scene and be dazzled by the variety of architecture clustered in just the few blocks on Wilshire where many of our great museums are located. Museum Row, downtown’s Grand Avenue, and Exposition Park are the primary cultural hubs of LA.

Locally, the thousands of Hancock Park neighbors who can easily walk over to the reimagined park may find they have their own “eureka” moment: a park that’s been improved with them in mind.