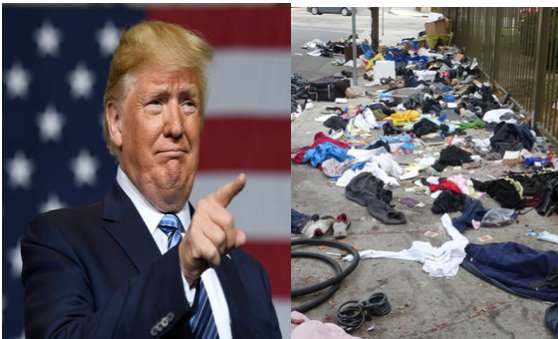 ALPERN AT LARGE--A very enthusiastic crowd of Mar Vista residents showed up in force to address potential situations to the homeless issue and to confront a developer who was developing an oversized project that was significantly different than the one at that site previously approved by the Mar Vista Community Council.

There were lots of angry words about the Mayor, the City Council (particularly the CD11 Councilmember), and Governor Newsom.

Interestingly enough, and I can't say why, I heard nothing pro or con about the President--who has his supporters and his opponents (the latter who normally march en masse in their Resistance in the City of the Angels).

But it's safe to say that the majority of those residents--regardless of what their federal/national or other political affiliations--were there to complain about the lawlessness associated with the worsening homeless crisis, and the inability (or unwillingness, depending on whose opinion you were to ask) of the LAPD and/or the L.A. Downtown leadership to resolve or reduce the crisis.

Enter President Trump, who is offering to move some residents to new government-backed facilities to help.

Neither President Trump nor Governor Newsom of California have minced words--they hate each other politically, but appear to have worked with each on issues such as fire and infrastructure development in California.

Clearly, Trump and Newsom are not "frenemies". They're enemies through and through, but yet both have an obligation to end the politics from time to time and fix problems.

Interestingly enough, however, on issues such as the homeless crisis and development (the two big issues confronting Mar Vistans that night), Governor Newsom is arguably one of the most singularly-hated governmental leaders in the region.

As a physician, I am trained (if not repeatedly shoved) into compartmentalizing my feelings and my emotions from a grip of the facts. In other words, my heart goes HERE, and my brain goes THERE.

So the big question is, to this physician's way of thinking, is President Trump's assailing the Democratic leadership in California about how they're handling (or NOT handling) the homelessness crisis just a scandalous way to score political points, or is it an honest assessment of the truth, or maybe just the President making an observation...while also offering to help?

Or maybe a combination of the above.

Yet our cities are NOT doing so well--San Francisco, Los Angeles, Chicago, Detroit, New York, and Baltimore have thriving elites and struggling middle classes...but also a misery index for far too many.

So does President Trump's offer to help make the problem worse, or is it simply an addressing that there's a problem and he's doing his job?

Which choice shall be made by the citizens of the City of the Angels?