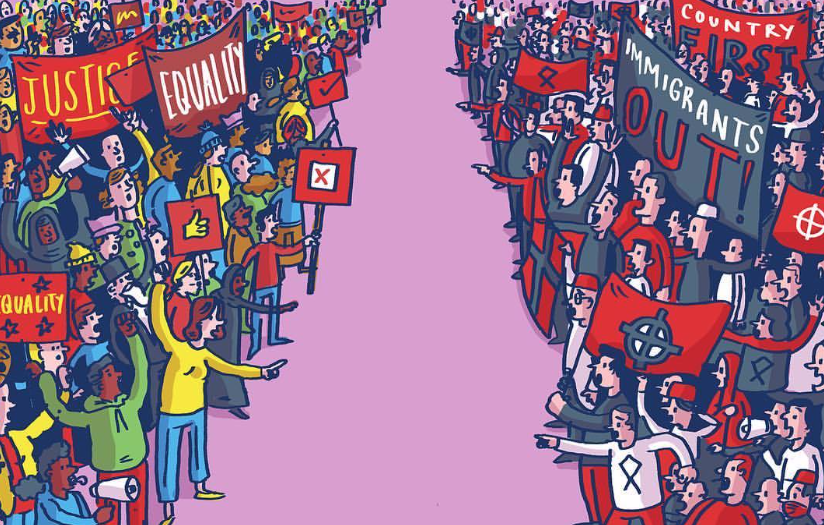 ONE MAN’S OPINION-Duh. What’s prodromal? As we all recall from our high school Greek class, prodrome is derived from the Greek word prodromos, meaning "running before." (Yeah, like I took Greek in high school.)

About the only time we come across this word is in psychiatry where it is most often found in connection with schizophrenia. Long before a person has full blow schizophrenia with hallucinations and delusions of persecution, the person goes through a phase where he or she undergoes a mixed bag of thought and behavioral changes. Others pass off the strange behavior as “going through a phase,” “she’s not feeling like herself, or “he’ll snap out of it.”

A society likewise may lurch along in its prodromal period until some traumatic event precipitates a breakdown. Prior to WW I, people knew that Europe was on edge and the balance of power was precarious. The assassination of Archduke Franz Ferdinand in 1914 resulted in WW I. Similarly, the firing on Fort Sumter on April 12, 1861 was not the cause of the American Civil War; it merely marked the end of the prodromal period which had been festering for decades.

Today, America is in the prodromal phase of a new type of civil war. There isn’t going to be any Mason-Dixon line to geographically separate the combatants. Rather, citizens everywhere will be subject to random attacks. The war will play out in shopping malls, in schools and at music festivals, or when police pull over someone with an AK-47 stashed in his truck. It will be a war of free-floating, random attacks of violence by various groups against other people whom they blame for their problems.

What Prodromal Factors Are Leading up to the Civil War?

There are three basic factors: (1) Group Rights in which politicians pit one group against another; (2) criminogenic institutions where the avaricious whims of the powerful have replaced the rule of law; and (3) killing other people is an acceptable solution.

Group Rights Are Deeply Entrenched in Both Political Parties

The lethal aspect of Group Rights/Identity Politics is the demonizing of another group. Trumpy-Dumpty blames illegals and Mexicans for all the woes of the whites in the Rust Belt, while Nancy Pelosi, who is the present leader of the Dems, blames whites, especially males and Jews. Pelosi, even more than the mentally challenged Trump, knows that riling up the white Right Wing will result in violence. The Department of Justice, the Southern Poverty Law Center on Law as well as the Anti-Defamation League (ADL) have been warning about the violent potential of White Supremacists for many years.

When major institutions such Congress (where people inexplicably become multi-millionaires) or the courts, which have become criminogenic as opposed to having shortcomings or a few bad apples, a growing mass of people feels helpless. When large segments of the population fall into depression, we see both self-destructive behavior and violent lashing out. Hordes of people turn to drugs to kill the psychic pain, while others seek release from feelings of impotence in mass murder.

The courts are criminogenic in ways which the average citizen does not realize until he or she becomes involved. We shall not mention miscreants like former California Attorney General Kamala Harris who specialized in using lying jailhouse informants and other ploys to incarcerate huge number minorities and whites, and instead we share the criminogenic nature of Probate Court’s Conservatorship proceedings.

When a family member files for a Conservatorship in Los Angeles County Probate Court, the court may appoint an attorney for the proposed conservatee. Under the law, the court appointed counsel (CAC) is like any other attorney who owes fiduciary duties to the client. Many people before the probate court are competent but have been subject to elder abuse and another family member has filed for the Conservatorship solely to break the physical and psychological hold of the abuser. Other times a Conservatorship may be sought by an abusive relative trying to gain control of the proposed conservatee’s wealth.

As a matter of practice, these rules do not apply in Probate Court. The CAC does not have to keep any confidential information to himself; he may take actions harmful to his client over the client’s objections; he may coerce the client into selling property which the client does not want to sell and has no reasonable basis to sell; he may make material misrepresentations and material omissions to the court. Put briefly, the reality is that CAC owes no duties to his client and may do anything he pleases, confident that the judge will back him up.

The Belief That Killing People Is Okay Is Deadly

A society that believes that killing other people is an acceptable solution to problems will see a lot more murders than a society in which killing is taboo. It is not uncommon for mass murderers like Dylann Roof to explain that they killed as many people as they could because someone had to do something. Presently, white nationalists are the primary murderers, but both the far left and the far right will resort to violence.

Mentally disturbed people gravitate toward the extremes where they find simplistic answers and psychological support for violence. As a friend pointed out, first only the certified nut cases turn violent, but as a criminogenic society abuses more people, the violence spreads to more stable individuals. As society’s power structure becomes increasingly oppressive, more people turn to violence until a critical mass is reached and results in civil war.

A criminogenic society, in which the powerful continually abuse and steal from everyone else, can have a prodromal period of many years before civil war erupts. No one can predict when the next archduke will be assassinated, launching us to a violent civil war.

(Richard Lee Abrams is a Los Angeles attorney and a CityWatch contributor. He can be reached at: Rickleeabrams@Gmail.com. Abrams views are his own and do not necessarily reflect the views of CityWatch.) Image: Dom McKenzie Illustration & Design. Edited for CityWatch by Linda Abrams.