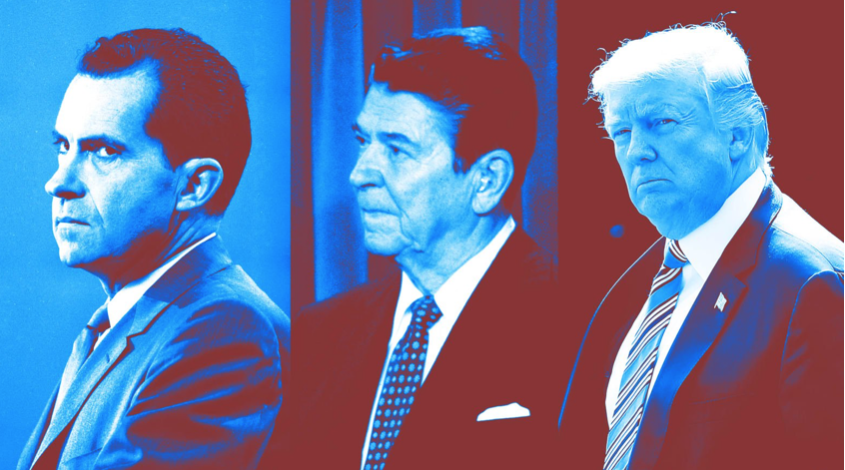 VIEW FROM HERE-According to a recent NYT article, when he was governor of California in 1971, Ronald Reagan phoned the White House to express his political virulence to President Richard M. Nixon.

"Reagan called African people ‘monkeys’ in a slur that sparked laughter from the President of the United States. . . .The previously undisclosed exchange took place after the United Nations voted to expel Taiwan in order to seat representatives from Beijing, a move that the United States opposed. Delegates from Tanzania celebrated with a victory dance in the General Assembly hall. "To see those monkeys from those African countries damn them,” Reagan said, to laughter from Nixon. “They are still uncomfortable wearing shoes.” The Times also reported that in different recordings, "Nixon went on to recount his conversation with Reagan to others, describing the African delegates as ‘cannibals’ as he sought to blame them for the United Nations vote.”

Did we really need this audio recording to know that Reagan held racially motivated views about politics, the economy, and culture? So many of his policies and official statements appeared to be motivated by racial ideology and thinly veiled alignments with the goals of white supremacy. There was his woefully inadequate-at-times, then openly hostile response to the AIDS epidemic. When he finally decided to address the crisis, he scapegoated blacks and homosexuals. Reagan's immense and catastrophic "War on Drugs" disproportionately impacted the lives of minorities living in America and all over the world. In this country, the evidence was drastic and incontrovertible: people of color faced higher numbers of arrests, longer prison sentences, more death sentences, and more concentrated shipments and distribution of narcotics into their neighborhoods.

President Reagan also spent lavishly engaging in and starting proxy wars throughout Latin America, including brutal civil wars in countries such as El Salvador and Nicaragua. His battle may have been with the Soviet Union, but he mainly invested his military powers in killing black and brown people who wanted to choose their own form of governance.

Nearly every day the message from the Reagan White House was that race is no excuse or explanation for poverty. People must "pull themselves up from the bootstraps." Slogans such as "Just Say No" were coupled with theories of trickle-down economics, and a full-throttle push to swing the courts dramatically to the right.

It did not matter if Reagan viewed himself as a racist, or if his followers believed that he was a racist. What mattered was the effect those policies had on people of color. The consequences were severe and long-lasting.

When I read the NYT article, I could not help but think about Donald Trump's comment regarding Haiti and other countries being "shithole" nations.

What are the effects that Trump's policies have on people of color in America today? An assault on social services including food stamps. How have those policies impacted people of color? How about Trump's "send them back" rhetoric? How does that affect people who have ancestral roots beyond these shores? How do anti-constitutional bans on Muslims flying into and out of America impact those who have a darker complexion and wear non-western clothing? How does authorizing the separating of brown-skinned babies from their mothers end up traumatizing these families and communities? Where are the voices of diversity in Trump's cabinet? Who of any import is left other than Ben Carson?

Is Trump a racist? Does it matter? His policies are. His words are. His attitude towards people of color is disrespectful, to say the least. Do we need to find an audio recording of him using the N-word to prove that he's racist? I hope not. We didn't need Reagan's recorded conversation with Nixon. His policies spoke volumes.

(George Cassidy Payne is an independent writer, social justice activist, and domestic violence counselor. He is a CityWatch contributor.) Image: The Daily Beast. Prepped for CityWatch by Linda Abrams.