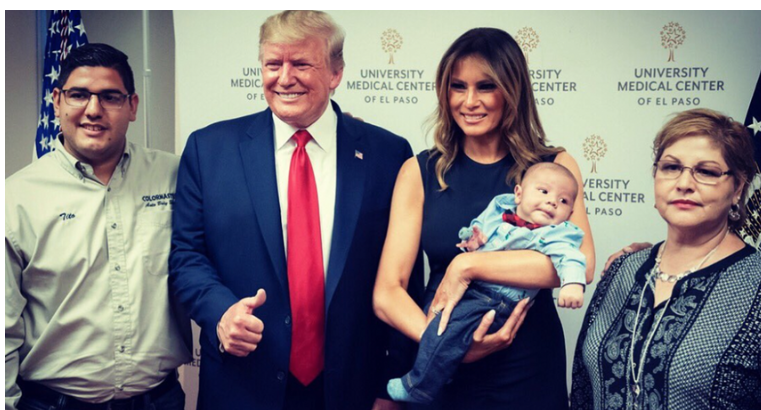 GELFAND’S WORLD--Beto O'Rourke just stated that the president is "sick" and "unfit for this office."

Perhaps he is more correct than he even intended to be. Suppose some of the president's penchant for saying untrue things isn't just his ability to lie without shame, but also represents a developing dementia brought on by some physical condition? There is plenty of indirect evidence to lead one to suspect.

Let's start with the latest reason to question. We start with the two year old baby whose parents died shielding him from the assassin's bullets. This is possibly the single most heartbreaking story out of our recent rounds of killing. As the news developed beginning with the story of the mother shielding the baby with her own body, the nation grieved. The next thing we saw was the staged photo-op in which the president's wife held the baby while the president, standing next to her, gave a thumbs-up sign while flashing a smile that would best be described as a smirk.

This goes beyond any political advisor's concern over bad optics. It communicates a total disconnect from human normality on the president's part.

Suppose we were to give Trump the benefit of the doubt and credit him with at least enough intellectual capacity to understand that you don't make fun of people who have just died heroically while defending the lives of their children. How then do you explain that shocking photo?

"Over the weekend, President Donald Trump gave a long, meandering speech at a fundraiser in Bridgehampton, New York, at one point adopting Japanese and South Korean accents to mock the countries’ respective leaders, Shinzo Abe and Moon Jae-in."

Bad optics doesn't begin to describe this lack of decorum. Taken together, these two stories, developing within hours of each other, imply a derangement of the mind that has even gone beyond Trump's performances prior to his election.

Well suppose we were to credit his behavior not to evil intent but to simple confusion? Perhaps Trump is already at the point where -- every once in a while -- he loses the train of thought and reverts to habitual private behaviors because he doesn't quite remember what he is supposed to be doing. So there he was at a photo-op that should be funereal, but in his mental state, he goes back to old practice and does what politicians do, which is to smile and do a thumbs-up. And there he was at a fundraiser a day or so later and mocked our closest allies while praising a murderous dictator.

I mean, even a Dick Cheney or George W. Bush would have known enough to look sad and sympathetic in El Paso. They wouldn't have made such fools of themselves at fundraisers.

As Beto pointed out in his remarks:

“For him then to focus on comparing political rallies or on himself, on how much people love him, just shows you how sick this guy is and how unfit for this office,” O’Rourke said. “He should be consoling people, bringing people together, focusing on their pain and improving their lives. And, instead, he's focused on himself.”

O'Rourke here is referring to Trump's comments to people in El Paso in which he went back to a standard Trumpian approach by comparing the size of his crowd to the crowd size of a political opponent. Leaving aside the weirdness of being constantly obsessed with counting the house, as if he were a down-on-his-luck owner of a failing theater, the inappropriate nature of that sort of talk in the wake of a mass murder is obvious.

Weird as it is, this is only the latest in a series of behaviors that -- viewed in hindsight -- also suggest an occasionally confused mental state.

I don't think that it's so unrealistic to attribute Trump's recent behavior to deteriorating mental faculties. Quite a few people have made this point over the past year or so, including one former White House aid, but the current situation has taken the president's weirdness out of the White House and into the public arena. Consider: Like other patients with accumulating defects, he tries to cover.  And maybe this explains at least some of the times he has said something that is obviously untrue, even contradicting something he has said previously. He gets asked a question and doesn't remember the answer -- it's kind of a mental blur at best -- so in his best P.T. Barnum fashion, he says whatever he thinks the public would like to hear.

Breaking news: Protests at the Pan Am Games

Over the weekend, two American athletes used their medal ceremonies to protest against the behavior of Donald Trump and against gun violence in the U.S. Fencer Race Imboden and hammer thrower Gwen Berry made use of the awards ceremonies to follow the lead set by Colin Kaepernick and Megan Rapinoe, among others. But we should also remember the original pioneers, Tommy Smith and John Carlos, who raised their fists during the awards ceremony at the 1968 Olympics. We should also remember that Smith and Carlos were thrown under the bus by the American sports administrators, who engaged in a collective exercise of pearl clutching and who punished the American sprinters for exercising what is, after all, a cherished American freedom.

The current protestors need our protection. Don't let the American authorities punish these athletes in any way. Equally to the point, make sure that that bastion of corruption and hypocrisy, the International Olympic Committee, is not allowed to engage in any censorship or punishment of these or any other athletes who wish to engage in their freedom of expression.

I'm reminded of the old (and oft-quoted) story about Henry David Thoreau, who refused to pay a poll tax because he believed it was supporting an unjust war. He was thrown in jail for his refusal. A few hours later, he was visited by Ralph Waldo Emerson, who asked, "What are you doing in there?"

Thoreau's reply, echoing down through the years, was, "What are you doing out there?"

It is right and proper that American athletes in increasing numbers tell the world that we object to what is going wrong. My question to the other American athletes is, "Why aren't you also protesting?" This would be a good time for leadership by America's best and most influential athletes.