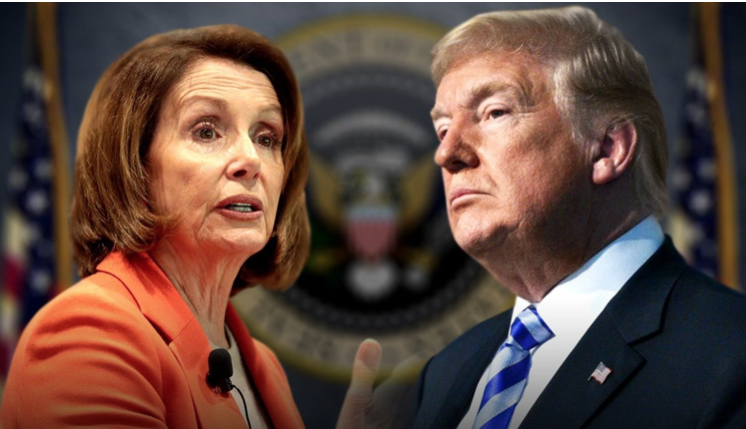 ONE MAN’S OPINION- Trumpolosi’s deadly attacks on America are coming on fast and furious. Two hundred and fifty such shootings this year and the Trumpolosi murder express has no intention of stopping its push for more violence. More violence equals more votes.

Despite their laments over “What can we do?”, TV’s Sunday Morning talking heads assiduously avoid the obvious: We the People could reject the group hatred and victimization philosophy that Trumpolosi spreads every day and for which they take zero responsibility. That is the nature of Group Rights: “The other group is at fault.” Thus, neither Dem nor GOP talking heads will admit that they bear any blame.

The El Paso shooter fell for the Trumpolosi division of “us against them.” The official policy of the Dems under Speaker of the House Nancy Pelosi is Identity Politics and how soon the minorities will supplant whites. Not only Blacks, Mexicans, Gays, etc. hear this crap, but whites hear it too. They also see their lives deteriorating and they seek an explanation. The Right Wing Trumpolosis have the answer – “It’s the Mexicans, or the Jews (Internationalists), or the Immigrants.” The Left Wing Trumpolosis rush to the microphones to blame the whites and Jews. Of course, it is acceptable to blame white people if you attach the word “Supremacist.” Let’s remember, the leader of the Left Wing Trumpolosis, Nancy Pelosi, elevated minority anti-Semites to leadership positions in Congress.

The Left Wing Trumpolosis promote racial violence by touting the philosophy of victimization among minorities in which whites are responsible for all their ills. Even when millions of minorities reject such Group Rights propaganda as trash, millions of disaffected whites see legitimization of their fears that the minorities are out to kill them. The secondary motto of the Right Wing Trumpolosis is, “Do unto to them before they do unto you.”

The Mentally Disturbed Are First to Turn Violent

We’d do well to remember the riots after the exoneration of police officers who brutally beat Rodney King. Reginald Denny was pulled from his truck and almost beaten to death by thugs before Black citizens, who saw the beating on TV, rushed from their homes and saved his life. The outrageous manipulation of the police officers’ trial in Simi Valley set off days of violent rage, but as always, it was the criminal element and the mentally unstable portion of the community that turned to violence.  Black neighbors saw an individual human being who needed help and risked their lives to save Reginald Denny. Likewise, today, mentally stable white people do not grab assault rifles to murder people at Walmart.

The psychology of what drives these mentally precarious people like the El Paso shooter over the edge is treated like a state secret. The constant clamor of left-wing anti-white Identity Politics is magnified a thousand-fold in the hate speech on right-wing radio and Internet hate sites. The Right Wing uses the Dem anti-white Identity Politics to convince people that they must take up arms to “save the white race.” Nancy Pelosi and Donald Trump are like the Imans who convince Arab youth to be suicide bombers, while they themselves stay home and collect more political donations from promoters of terrorism.

Let’s be very clear – both Nancy Pelosi and Donald Trump financially and politically benefit from the constant internecine violence and both halves of Trumpolosi are certain that it will garner them more votes.

The Public May be Gullible, But Nancy Pelosi is Not

The FBI has been warning for years that White Supremacists are a violent danger to society, and the response of Nancy Pelosi has been to make certain the right-wing nut cases feel increasingly threatened by minorities. When the FBI informs political leaders that anti-white Identity Politics is fueling home grown terrorism, a decent person would stop with the Group Rights – but not Nancy Pelosi. Worse yet is the overwhelming political cowardice of almost all other leading Dems. Which one has taken to rebuking Pelosi for stoking the fires of group hatred? They blame Trump while being silent about their own role. Trump, being a Histrionic, goes wherever the crowd cheers the loudest and the right-wing hate-mongers are great at cheering.

Violence Grows in Fertile Soil of Hatred and Ignorance

We the People and our passions are the soil from which Group Rights spring. If We the People heeded Thomas Jefferson’s pronouncement that all individuals have inalienable rights and listened to Martin Luther King’s brilliant restatement of our founding principle to judge individuals by their character and not by skin color, then no politico would dare promote left- or right-wing Identity Politics. If Trumpolosi thought he/she would lose votes with the promotion of Identity Politics, they would cease and desist overnight. Trumpolosi knows the reality: Identity Politics means more votes and less attention paid to the systematic transfer of wealth to the 1%.

The New Civil War is Under Way

Group Rights always leads to the same result: violence. America is experiencing a new civil war along the lines of urban guerrilla warfare. To paraphrase the original “Candid Camera” TV show, “Anywhere, anytime, when you least expect it, you can be shot dead.” Viva Trumpolosi!