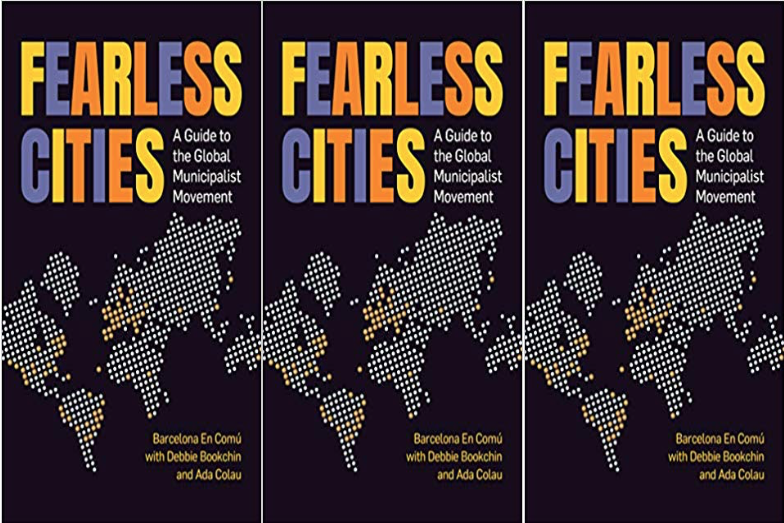 NEED TO READ--In 2014 Venice, Los Angeles, California, and in Barcelona, Spain, tenants were being evicted, rents were raised, and the apartments turned into Airbanb sites for tourists in both cities.

In Los Angeles from 2015-2017 people had tried and failed to get the city council to regulate how apartments were turned into tourist hotels. In Barcelona three movements critical of touristification sprung up, and in 2015 these three movements fused into one and helped elect a housing advocate Ada Colau mayor that year. Then in 2017 the Barcelona city council approved PEUAT, a zoning plan to regulate hotel and tourist apartment licenses in the city center.  The book Fearless Cities is the story of how Barcelona and many other cities adopted radical democracy to deal with its housing crises.

Ada Colau had been active for years in the Barcelona housing movement Platform of People Affected by Mortgages or PAH for people suffering from Big Companies like Blackstone’s mortgage evictions and utilities cut-offs. Blackstone is also a huge landlord in California with a tenants’ group fighting its evictions and poor services in 2015. In Barcelona PAH, made of neighborhood groups, became a crucial space that developed analyses, worked on diagnostic documents dealing with health, economy, housing, etc. for their neighborhoods in open meetings, and then mobilized the group’s strength. PAH grew from its Barcelona base into a strong national housing movement.

In Los Angeles citizens could choose from one of two political parties—Democratic or Republican—and basically the same Democratic mayor and city council from 2014 through 2019 had the same housing policies resulting in thousands of evictions and 36,000 homeless in the city. California tenants tried to pass a state-wide rent control in 2018 but Blackstone spent $5.6 million helping to defeat it. In contrast, Barcelona’s housing movements organized a new political party Barcelona en Comu in 2015, developed a platform with 30,000 residents, and allied with three other left political groups to campaign in the city election, winning the majority in the election and electing Ada Colau as Barcelona’s first female mayor. Barcelona en Comu called its methods “municipalism”: radical democracy enabling city politics from below.

The book Fearless Cities describes that “the first municipalist summit” took place in Barcelona with 700 people from around the world. The 2017 convention led to the book Fearless Cities. The book’s introduction describes the book not as an “encyclopedia” but as the first snapshot of an ever-growing global movement. 144 people from 54 towns and cities wrote the book’s short essays. The book is an excellent how-to book on how to change your city’s politics.

Fearless Cities first excellent section has four good essays defining “municipalism.” Deborah Bookchin’s “The Future We Deserve” argues that neither street demonstrations nor merely electing old party politicians really changes city politics.  Instead she thinks power must be returned “to ordinary citizens… True politics is the opposite of parliamentary politics. It begins at the base, in local assemblies.” Jorge Sharp, mayor of Valparaiso, Chile, also argues in “New Life Begins at the Local Level” says that that “people take the solutions to their problems in their own hands.” Fatima Talen from the Badalona City Council argues in “Standing up to the far right” that new city policies as organized meetings through the city to reduce citizens’ isolation from each other.

The writers, over half of whom are women, are dedicated to feminizing politics. Laura Perez was on the Barcelona City Council as their Councillar Representative for Feminism, LGBTI Affairs and International Relations. She explains feminizing politics through including equal number of women and men in political spaces and encouraging all to speak. She argues that city budgets, transport networks, and city design all should take into account gender.

The most crucial section is the book’s “Organizing toolkits” which consist of how to essays that show how to organize a municipalist city from below demands huge rethinking of how we do politics. The essay “Organizing a municipalist platform: structure and confluence” defines “confluence” not just as parties reaching out but as getting citizens not in existing parties or movements “that will allow different people and organizations to work together.”  Neighborhood assemblies consists of activists from neighborhoods and are in the Co-ordination Assembly. Also, the Policy Groups made of neighborhood people work on specific policies while the Guarantee Committee is an independent group of activists monitoring democratic function “equal participation, fairness and transparency.”

Many cities like Los Angeles are known for their corruption when developers constantly give money to politicians, and then the city OK’s the developers zoning changes or other plans. The essay “How to create a participatory municipalist candidacy” describes instead how people in many cities start with going into the neighbors asking people what they would change in their city. They have hundreds of people or even thousands develop a manifesto, and then their members choose candidates to stand in elections. Another crucial how-to chapter is “Code of ethics and financing” where they have large citizens’ group draw up a code of ethics and detail how to collectively raise money avoiding corruption.

The how to essay “Communication for municipalist transformation” gives lively ideas how to communicatee “from the heart” using lively symbols such as in Belgrade a duck means “a scam” with the duck symbol appearing from street demonstrations to Facebook. Barcelona and Madrid both had Graphic Liberation Movements. Still another how to essay “Creating non-state institutions” tells how Cuidad Future (City of the Future) in Rosario, Argentina, revived the local milk industry, created two schools for adults and healthcare centers in poor neighborhoods full of violence.

The third section “Policy Toolkits” has essays showing how people in various cities around the world worked to increase “Radical Democracy in the city council.” “Public Space” explores how people participate in designing their public spaces as well as getting more public spaces. Methods for protecting tenants and reducing gentrification are discussed in “Housing, gentrification and tourism.” “Mobility and Pollution” deals with ways to collective reduce air and other pollution as well as how to give the city’s population more affordable public transportation reducing public space for private vehicles and penalizing or banning high-emission vehicles. “Sanctuary Cities” details how cities are welcoming refugees such as municipal ID cards in New York where undocumented immigrants or transgender or formerly incarcerated can get IDNYC which gives its holders access to city services and entry to public buildings.

The last essay by Ada Colau “Epilogue: Transforming fear into Hope” should, I think, be the preface as it’s the only essay that really places Fearless Cities and municipalism within recent history. Colau argues that neoliberalism increased class inequality making more people live in fear that gives rise to far-right movements in many countries. Colau points out that the far-right increases divisions of “above/below” and “us/the others” which is “reductive and dangerous….” She argues that municipalism gets rid of these divisions by “starting from the place where we all recognize one another as equals” and helps to reduce fear. Colau feels that municipalism will develop equal opportunities within cities and town and weave “its own international web of solidarity.”

The book does need an Introduction that gives a history of municipalism in Barcelona and many other Spanish cities as a reaction to the neo-liberalism austerity and mass evictions of 2010-2014.  Barcelona en Comu passed PEUAT that created a “degrowth” zone in the city’s historic center limiting the growth of hotels there, but the left parties mobilized and got the City Council to extend the degrowth center to more neighborhoods, making the degrowth area even larger.  In December 2018 Los Angeles City Council finally passed in December 2018 regulations of short-term tourist rentals, but after six months the affordable housing crises in the city has only worsened with homeless growing to 36,000 people in the city and 59,000 people in the country. People have no idea if the tourist rental regulations are being followed. Fearless Cities is a crucial book to read in those many cities and towns suffering gentrification, mass evictions, and touristification.

(Julia Stein is a poet, novelist, literary critic and CityWatch contributor, now living in Los Angeles. She has published five books of poetry: Under the Ladder to Heaven, Desert Soldiers, Shulamith, and Walker Woman, and What Were They Like? Stein is also co-author of the book "Shooting Women: Behind the Camera.)