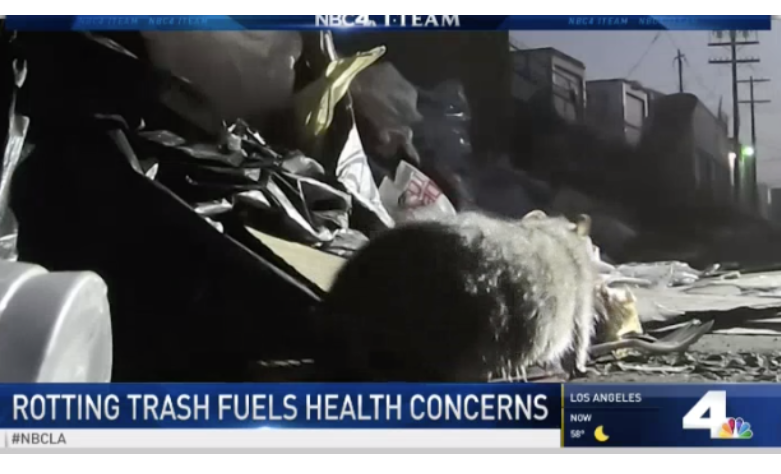 ONE MAN’S OPINION-Rats, disease, pestilence are merely symptoms of a city run by criminals.

In criminogenic Los Angeles, the media has covered up the vast corruptionism which has been rotting Los Angeles since 2001. The state court system has been one of our most hideously oppressive institutions. Yet, We the People are so complicit that we think some regressive anti-justice person like former State Attorney General Kamala Harris would make a decent President. The federal courts highlighted her crucial role in railroading innocent minorities into prison. Uncharacteristically, the LA Times (while being run out of Chicago), let Maura Dolan publish the behind-the-scenes story where Attorney General Harris was lambasted as instrumental in the “epidemic of misconduct.” Dolan was soon silenced. And now we face a new epidemic – rats, disease and pestilence in addition to a corrupt City Hall and judiciary.

The long and short of the situation is that Los Angeles is a criminal enterprise where the mayor, city council and the state courts don’t give a damn about anyone or anything other than aggrandizing their own wealth and prestige.

The Cause of the Rats Is Well Known: Garcetti!

Garcetti’s insane fixation on the Manhattanization of Los Angeles was and is based on victimization of the poorest among us with the help of the state judicial system with the likes Justice Paul Turner (dec), Judge John Torribio, Judge Richard Fruin, Dufus Mitchie Beckloff and all the way up to Chief Justice Tani Gorre Cantil-Sakauye.

Because rent-controlled apartments are the cheapest to buy, developers naturally seize upon them.  Thousands of poor people, many Spanish speaking, are pressured to vacate their homes, and if that does not work, there’s a gaggle of willing judges to evict them. In 2013, Patrick Range McDonald wrote a piece in the LA Weekly  explaining that Garcetti engaged in ethnic cleansing of Latinos.

Using only Ellis Act evictions, the homes of over 60,000 poor people have been destroyed since Garcetti took office. Thousands more renters were illegally evicted. These people are the elderly and sick living on fixed incomes, the mentally ill on SSDI, single mothers with kids, and others who simply do not make enough money to afford upscale apartments.

Victimizing the poor was a necessary step to Manhattanize Los Angeles. Manhattanization is a Basin thing; Bunker Hill is the prototype. The objective is to make a handful of landowners wealthier by concentrating offices and high-rise apartments on a few parcels of land. The Basin is where LA has its most pre-1979 apartments. (Only pre-1979 apartments fall under rent control.)

Even a nitwit can figure out that when the city destroys the homes of tens of thousands of its poorest people, homelessness will increase. Garcetti, who is no dummy, knew exactly what he was doing. He knew untold numbers of innocent people would suffer and die so that his buddies could make billions. If you were a fan of Dick Cheney’s plundering Iraq, you should love Eric Garcetti.

Well after the homeless situation became a crisis, Garcetti continued to target rent-controlled housing for destruction. About another 4,500 poor people had their apartments destroyed during 2018 and the number of homeless increased by 16%. And now nature is taking her course. The homeless still need to relieve themselves, whether or not Garcetti allows them to have toilets. At the same time, the results of Garcetti’s “Mafiazation” of garbage collection hit DTLA and businesses have started dumping garbage on the streets and alleys rather than pay highway robbery prices for trash collection. Then came Joel Grover with his camera!

Quality of Life Is Never A Factor at LA City Hall

Criminogenic City Hall is obsessed with new ways to loot the city treasury. As the quality of life of Angelenos plays no role at all in the city’s decision, LA is becoming a third world country. People dying in the streets – no concern. City employees getting typhus; that’s just a PR problem.

Things Will Get Worse

According to one of the experts behind the July 16, 2019 Rat Report, LA has now more rats than people. Although the media downplays the role of Garcetti’s Manhattanization, the report makes clear that rise of homelessness and the city’s refusal to combat the associated filth mean conditions will continue to worsen. Now that Garcetti wants to hide the homeless by removing them from DTLA, the rats will spread throughout the entire city.

When the homeless are kicked out of DTLA, the rats will spread out with them. As the homeless make their encampments in Bel Air, Westwood, and the Valley, human feces and the garbage will accumulate in new areas, and within a few months the wealthy in their fancy mansions will find skid row conditions lurking in the underbrush along nearby freeways.

“We have never seen a rat infestation this severe in our lifetimes and the risk of a public health epidemic soon is high.” Lead sentence in the July 16, 2019 Rat Report.

Rats, Disease and Pestilence Migrate to West LA and North to the Valley

Our criminogenic city, backed by a criminogenic judiciary, is preoccupied with its own self-aggrandizement. The Rat Report shows how the rats, disease and pestilence are moving into the nicer parts of town. The rats multiply during the summer months. Garcetti is shoving the homeless out of the Basin just into time for them to set up their encampments in other parts of the city. When the wet winter arrives, the rats will move inside. If you live within a half mile of a freeway with its dense under brush, the rats will squeeze into your comfy home.

Even if city attorneys and police officers are being infected, don’t deceive yourself. Garcetti is not going to stop his Manhattanziation. The homes of poor people will continue to be destroyed and the homeless population will grow – despite being shoved out of sight – and the rats with their disease-ridden fleas will be scurrying about your bedroom.

Anyone who thinks that rats, disease and pestilence might be soon be controlled is fatally naive. Los Angeles has been becoming a dung heap since 2001 and the worst is yet to come.