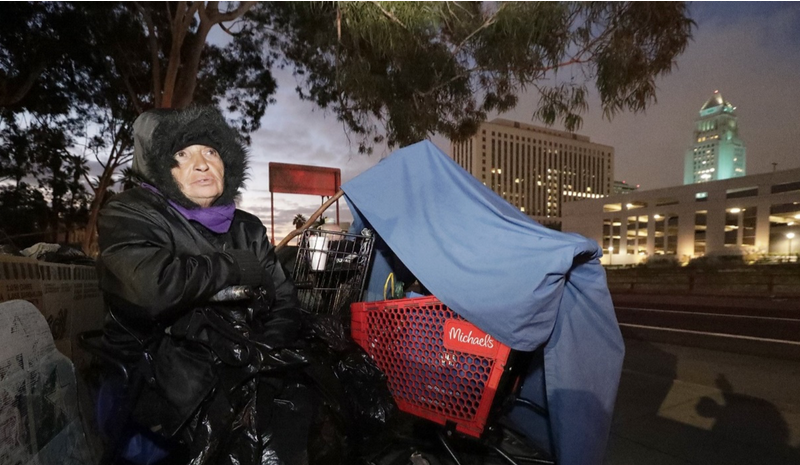 ONE MAN’S OPINION-While Garcetti is the architect of Los Angeles Homeless Crisis, the evil conspiracy of silence by the esteemed Dr. Patrick Soon-Shiong’s Pravda West, along with the local and national news media, has helped bring about the Homeless Crisis.

heir silence conceals the cause of it. Yes, I have to shout “CRISIS” in order to drive home the point. While homelessness has been with Angelenos for decades, the Crisis has been manufactured by Mayor Eric Garcetti.

According CNN, the County has 60,000 homeless, but CNN is silent about Garcetti’s Manhattanization of LA and how it has destroyed the homes of over 60,000 people. When one undertakes to tell a story, one has the moral duty to tell all vital facts. CNN ignores one of the biggest causes of the homeless crisis which is the continual destruction of rent-controlled properties. (Destruction of RSO units is often the first step in densification.)

Just as cops used to say to rape victims, “Didn’t you ask for it – being so young pretty?” now CNN tells us the problem is that the homeless people are “shelter resistant.” The implication is that homeless people could fix their plight by moving inside. “It’s their own fault; they choose to be homeless,” so the media lie goes. Blaming the homeless removes CNN’s need to discuss the mass destruction of poor people’s homes.

CNN, along with “Pravda West” (LA Times) and other local media, bashes the homeless, branding them as criminals, drug addicts and mentally ill. CNN intentionally seeks out these traditionally homeless persons and pretends that they merit their situation due to their moral defects. CNN is silent about the moral defects of billionaires who have been targeting rent-controlled properties for destruction.

Let’s stop being duped. Pravda West, CNN, MSNBC, KNBC, ABC, etc. are not run by dumb people. Their leaders are immoral leaches sucking the life out of America, but they are not stupid. (Trump at least has the excuse of mental illness, but not LA Times owner Dr. Patrick Soon-Shiong.)

The Homeless Crisis is a Symptom, not a Cause

The Crisis is merely a symptom of the rampant corruptionism which has plagued Los Angeles for years. We have other symptoms, too. Under Garcetti, we have gone from having bad traffic congestion to consistently having the worst traffic congestion in the world – worse than Beijing, worse than New Delhi. LA’s traffic is the worst for the same reason that there are rats carrying diseases throughout the entire city – excessive densification of the Basin. You won’t see that mentioned in Pravda West. Densification linked to bogus mass transit projects will literally loot over a trillion dollars from Los Angeles over the next decade.

This corruptionism involves not just the destruction of poor people’s homes, but also the securitization of rents, the criminal vote trading system in LA City Council, the outrageous, fraudulently high cost of buying a home, swelling the bank accounts of Wall Street firms beyond our imagination.

Corruptionism is destroying every decent aspect of LA life. Before Garcetti’s Manhattanization, no one referred to Los Angeles as a Third World Country. When Garcetti was elected in 2001, Los Angeles was the nation’s leading destination city. Corruptionism has made LA the least desirable urban destination.

The data is there but the evil conspiracy of silence will not report it. However, you can find reliable information in NewGeography, USC’ Sol Price School of Public Policy, CityWatch, Preserve LA, and Zwartz Talk that explains how Garcetti has pushed through his Manhattanization, causing LA to decline.

He was elected CD 13 councilmember in 2001 and by 2010, his policies had so devastated his own district that CD 13 ceased to have enough people to be a legal council district. Because a 1925 ordinance requires the city to have 15 council districts, Garcetti got to steal parts of CD 4 and Koreatown so that CD 13 could continue as a council district. Garcetti and Pravda West declared the literal destruction of CD 13 to be the “revitalization” of Hollywood.

Under Garcetti, we now have:

Soon the data will show that LA has had the largest increase in densification with corresponding decrease in quality of life.

Will Angelenos be like Ramesses II and Ignore the Warnings?

One need not be religious to grasp the point that prior to civic disasters, there are often warnings.  Ramesses II was too full of himself to heed the Ten Plagues. The homeless Crisis is merely the latest warning. A conspiracy of silence about underlying corruptionism will not solve the problem. Will We the People be like Pharaoh and ignore the warnings?

A journey of a thousand miles begins with a single step. Getting rid of Garcetti is a good first step, but it is not the final step. Let’s use the Recall Petition to lay the foundation to boot out the corrupt city council, District Attorney Jackie Lacey, the corrupt judges, and the lying pro-density YIMBYs. The conspiracy of silence has duped Angelenos for far too long.

If We the People do not support the Recall Petition, then we deserve the rats that will eventually invade our kids’ bedrooms.