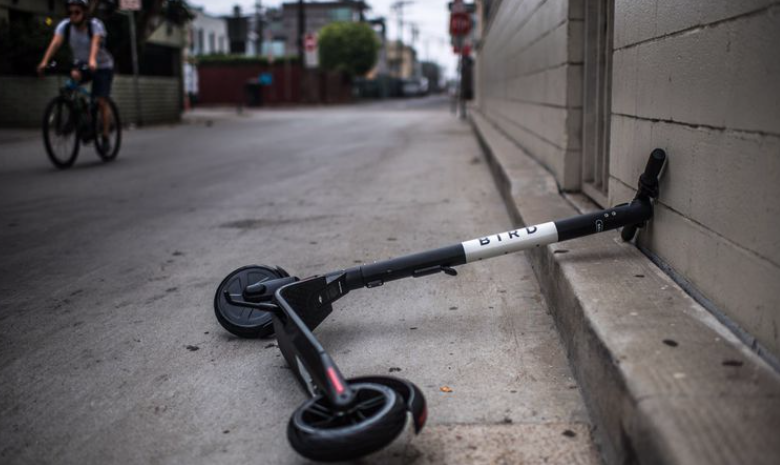 GELFAND’S WORLD--There is a Bird scooter that has been gracing the alley adjacent to where I live for 3 days going on 4 as of this writing. I ask the following question:

At what point does the leaving of this scooter constitute abandonment in the legal sense? In short, can one of the dumpster divers who frequent the area take salvage rights and collect the scooter for sale? If not, by what legal right does Bird claim that it can use the public right of way for its own use indefinitely? There is an old abandoned vacuum cleaner that somebody left near the scooter. It is free for the taking to any of the scavengers who pick up metal and plastic in order to sell. What's the difference between the scooter and that vacuum cleaner?

I am willing to grant that a company that engages in negotiations with the City of Los Angeles and has a signed agreement is in a different position. The city government can specify the right for the Lime company to store (ie: allow people to abandon) its scooters on our sidewalks and street corners, and this also implies continued ownership of the scooters by the Lime company. But that is different from a company dropping scooters off in a city without such negotiations or contractual agreements.

When I called the toll-free number for Bird, I was told that there is no service in San Pedro, although the company claims to have an agreement with the city of Los Angeles as a whole. I was also told that this particular scooter does not show up on their screen. The customer service representative speculated that it was damaged in some way, leading to its failure to show up on their sensors.

In a related matter, I have heard nothing recently about the serious liability issues that the scooters are presenting. There was a flurry of TV news items about people being injured on the scooters and injuring others. There were also instances of property damage due to scooters running into things such as cars. At the time, the scooter companies were busy denying that they had liability, suggesting that the injured parties take it up with the scooter drivers. If you read the article linked above, you will find a statement claiming that Lime has liability insurance, but it is not clear that they are publicly accepting their own corporate responsibility for each event.

When I asked the Bird customer service agent whether Bird now accepts responsibility for damages or injuries caused by their scooters, he would not answer. I was told that this is a press issue and I should contact them. When I asked to be connected to their press telephone number, he claimed that there is no such number available. Apparently if you want to inquire as to how they view their responsibility to public safety, you have to find the proper email address. The customer service rep will give you that email address but will not connect you to them, nor will he give you a phone number for the corporate administration. 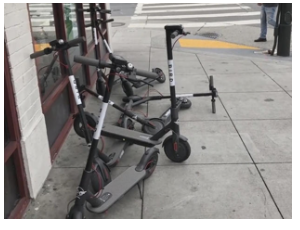 In brief, if you call the toll-free number that Bird supplies to ask about public safety, you will get nowhere with them.

There were other issues in that some scooter companies were not willing to automatically supply the names of the people who had rented the scooters that were involved in the accidents. Considering that in some cases the scooter drivers just left the scene of the accident (abandoning said scooter), this is a serious issue.

I don't think that the courts will have a lot of sympathy for this transparent evasion of responsibility. After all, if you loan your car to somebody and he runs into another car, you are responsible for the damages. Why should it be any different if the vehicle is a scooter instead of an automobile?

It will only take one big case (i.e.: a serious injury and the resulting lawsuit) for this question to get settled. And with that legal precedent, the price of scooter usage will most likely include a substantial price increase to cover potential damages. As the linked article shows, there are now a number of cases that will eventually wend their way through the courts.

The other thing that I wonder about -- What if somebody figures out that there is something of value such as the motor or the electronics that can be salvaged from a stolen scooter? How long do you think it will be before all of the visible scooters end up in the back of somebody's truck and end up as spare parts and bulk copper wire for sale?

Monopoly pricing with a vengeance

A couple of weeks ago, I flew to Boston on a major U.S. airline. The plane was scheduled to leave very early, so I planned to grab some breakfast in the terminal prior to boarding. I have often grabbed something at the MacDonalds at Terminal 1 (does it still exist?) or at some other food stand. But this time I went through Terminal 6. It was not a happy experience. I couldn't find an active breakfast place with fast-food service and reasonable pricing. This being the typical airline experience in which you have to keep your eye on the clock, I went to one of the walk through places and grabbed a chicken salad sandwich and a bottle of water. (More about that bottle of water below.) When I got to the cash register, I was kept waiting for another 3 or 4 minutes while the cashier fussed with something or other. Then she rang up my sandwich and water and collected just under $18. I was astonished at the rip-off, but the alternative of sitting through a 6 hour flight without any sustenance was not appealing.

There are thousands of places in Los Angeles that are willing to sell me breakfast at a nominal price, but they are not in the airport on the other side of the security screening. On the far side of the X-ray machines, you are faced with monopoly pricing on everything from that chicken salad sandwich to a bottle of water. This is something that should be subject to regulation for all the same reasons that electric service is subject to regulation -- Under conditions of "natural monopoly," it is appropriate that some regulatory agency protect the interests of the consumer because you are not in a free market where you can shop for the best price.

Now about that $5 bottle of water -- You may remember when the government determined that liquids need to be screened and regulated for our protection, thus the limitation to 100 ml or 3 ounces, or something like that. Thus the TSA screeners take any bottle of water we may have forgotten to remove from our carry-ons. That leaves us prey to the merchants on the other side of the screening who are willing to sell us water. Unless the airport commission or some other government agency is willing to protect us, we are at the mercy of those merchants. And in the case of Terminal 6 at LAX, they take advantage of that fact with a vengeance.

Here's a curious counter story -- the flip side if you will:

I had an equally early return flight from Boston a few days later. The sun was barely above the horizon as I arrived at the terminal and went through screening. I was bracing myself for the prospect of buying food on the plane, but right in front of me, there was a Burger King. Not only that, but the staff were right there, attentive and helpful. I got a full breakfast including a coffee for a total (including tax) of $5.45. I'm looking at the receipt, which describes the Main Food Court at Terminal C, Logan Airport, East Boston, MA. Somebody in government either remembered to protect the public or forgot to rent out space exclusively to high priced name restaurateurs.

Our mayor should instruct the Airport Commission to make sure that inexpensive food service be included at every terminal. That does not mean that the Commission needs to take a direct role in regulating prices at individual establishments -- the restaurants and their rich clients should be free to find each other. But the next several locations that become available in the area of the airline gates should be rented only to companies that will contract to provide food at a price closer to what is available beyond the airport's boundaries.

It's not a new idea at all. Most major airports I have been through have a much better assortment of prices and types of food. It may be that the problem stems from the now-obsolete architecture of LAX with its individual terminals rather than one or two main courts. But this is merely an excuse for the fact that the Commission and the people who have appointed the commissioners haven't been thinking about the public necessity and convenience.

The Women's World Cup in Soccer

Today's (Monday) game against Spain was not all that splendid, with the Americans surviving a 2-1 victory propelled by penalty kicks alone. The Americans will take on France in the next round and we will begin to see whether this is a team of destiny or a bit of a disappointment.

(Bob Gelfand writes on science, culture, and politics for CityWatch. He can be reached at [email protected].net)