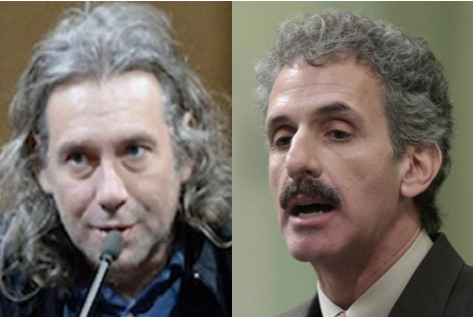 Feuer, in the form of two of his Deputy City Attorneys, veteran Hugo Rossitter and Jamie Jinsun Kim, who has only been on the job for a year, failed to get both an emergency restraining order as well as a three-year restraining order in separate hearings against Spindler who, when not pushing buttons of corrupt local government officials, is an immigration attorney.

Los Angeles Superior Court Judge Jennifer Cops’ ruling in Spindler’s favor was simple and sober:  “The Court finds that Petitioner (the City of Los Angeles) has not met the burden of proof by clear and convincing evidence.  Having no basis for the issuance of a permanent restraining order, the Court hereby denies Petitioner’s request.”

But there is a back-story to her ruling and, as predicted by this column, you didn’t hear a word about it from the LA Times because Feuer and City Hall lost.  (In 2016, the Times wrote voluminously when Rossitter won a TRO against Spindler for his brouhaha with self-dealing City Council president Herb Wesson.)

That back-story is this:  Feuer, the City Attorney with two Harvard degrees, keeps abusing his government authority in his quest to silence over-the-top criticism of government and politicians.

Dial the clock back to 2016, when Rossitter ham-handedly obtained that TRO against Spindler for the Wesson matter, despite the veteran prosecutor’s penchant for making mistakes like using the wrong names of parties on legal forms, and distractions Rossitter has with his unauthorized legal consulting businesses, including his failure to pay business taxes to the City of Beverly Hills and City of Los Angeles, which is also his employer.

That TRO is set to expire in a few days on June 10th.  If Wesson, Feuer or Rossitter wanted it extended, they had to file such a request back on March 11th.  But they failed to do so, indicating that the City Hall cabal either believes Spindler is no longer a threat to Wesson or the ever-bumbling Rossitter simply forgot to file the paperwork.  The smart money is on the latter.

So, they had to figure out a way to keep Spindler’s boorish behavior under a measure of control, and sloppily tried to do that by erroneously tying him to the recent misconduct of his equally opinionated sidekick Armando Herman.

Herman recently got into a spat with Strefan Fauble, the Feuer deputy who referees matters at LA City Council meetings.  He recently exposed Fauble’s home address during a City Council public comment period, but claimed it was public information, since Fauble had previously published his address in a Pasadena City Council matter.  Spindler later publicly repeated the address during his ongoing campaign to expose voter fraud committed by Wesson’s son, City Council “floor director” Justin Wesson, a story originally exposed by The Guss Report.  LINK: https://www.citywatchla.com/index.php/2016-01-01-13-17-00/los-angeles/16441-the-politician-s-son-his-voter-fraud-and-a-tip-off

When Rossitter and Kim sought a restraining order last week against Herman to keep him away from Fauble and from repeating the address at public meetings, they tried to tie Spindler into the Herman matter, failing spectacularly.

Judge Cops, who also lectures on criminal justice at California State University Long Beach, may have doubted Rossitter’s and Kim’s veracity, starting with the underhanded way LAPD Threat Management detectives tried to deny Spindler and Herman a fair hearing by serving them with papers for it just 90 minutes beforehand, when they knew the gadflies’ home addresses and could have easily served them days earlier.  Spindler and Herman say that the detectives grinned during the dubiously timed service.

At the TRO hearing last week, Fauble testified that he was afraid of Herman.  Rossitter and Kim entered into evidence LAPD body camera footage showing Herman recently hurling invective at Fauble before a City Council meeting.

The problem for the City was that Herman also recorded the incident, and more of it, including what happened prior to the encounter, suggesting that the LAPD may have edited-out content that could at least partially exonerate Herman.  That is not unlike when late LAPD Detective Phil Vanatter infamously added bloody drops to OJ Simpson’s discarded sock, and the drops leaked to the other side of the sock, proving LAPD evidence tampering.

Fauble also claimed that he was fearful that Spindler, who is not allowed to possess any firearms as a result of the soon-to-expire 2016 restraining order, might soon obtain them.  Judge Cops dismissed that as irrelevant because she can’t issue a restraining order for conditions that do not presently exist.

With Spindler getting a complete court victory, and Herman getting a partial one, Feuer’s thuggery adds fuel to the free speech fire.

Spindler attributes the failed TRO efforts to two of his recent public comments, which are constitutionally protected provided that they are loosely tied to the meeting agenda.  In one, he called Councilmember Nury Martinez a “f_____g c__t for Item 1h,” after which Martinez “lost” Spindler’s other speaker cards.  In another incident, Spindler started his commentary with “Good morning you f_____g n_____s…..and Greig Smith,” referring to a Councilmember of whom he has less criticism.

Spindler is also filing a complaint against Rossitter, et al for failing to disqualify themselves from the TRO hearings because they are named defendants in his ongoing 1st Amendment civil lawsuit against the City, alleging a systemic effort by City Hall to suffocate criticism.   He warns, “I already have them spending a fortune defending the indefensible.  And that alone is what I call winning.”

Feuer, Rossitter and Kim did not respond to a request to share their side of the story.

(Daniel Guss, MBA, is a member of the Los Angeles Press Club, and has contributed to CityWatch, KFI AM-640, Huffington Post, Los Angeles Times, Los Angeles Daily News, Los Angeles Magazine, Movieline Magazine, Emmy Magazine, Los Angeles Business Journal and elsewhere. Follow him on Twitter @TheGussReport. His opinions are his own and do not necessarily reflect the views of CityWatch.)