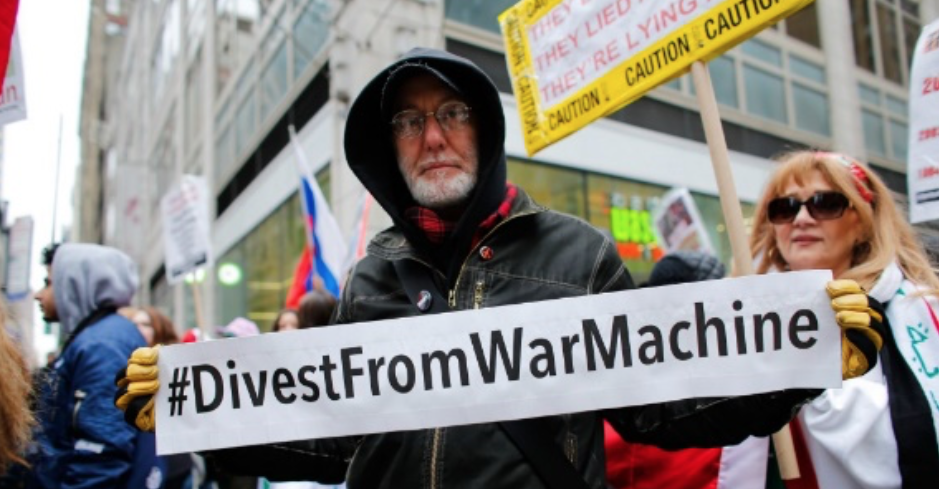 MORE WAR THAN WE NEED--In an effort to rein in the bloated military-industrial complex and free up funds for "programs that nurture human lives rather than take them away," a coalition of nearly two dozen progressive advocacy groups on Thursday launched a campaign urging 2020 Democratic presidential candidates to support cutting the Pentagon budget by at least $200 billion per year.

"The left is done paying for warmongers to squander human life and resources, and we will not support candidates who fail to pledge to reverse this horrific course."
—Sean Vitka, Demand Progress

Over the next decade, the "People Over Pentagon" agenda would make at least $2 trillion in spending available for essential domestic needs and ambitious programs like Medicare for All and a Green New Deal, said the coalition, which includes Win Without War, Public Citizen, 350.org, and other grassroots organizations.

"I've always found it remarkable that when it comes to war, fighter jets, and bombs, most politicians never ask how we'll pay for it, but when it comes to progressive policies like Medicare for All, some members of Congress pretend we can't afford to foot the bill," Heidi Hess, co-director of CREDO Action, said in a statement.

The current Pentagon budget—which was approved on a bipartisan basis last June—is $716 billion. As Common Dreams reported in March, the Democratic leadership is attempting to cut a deal with Trump to hike military spending to $733 billion—slightly less than the $750 billion President Donald Trump demanded in his 2020 budget request.

"Democrats, for good reason, vehemently oppose almost everything Trump proposes, but when he asks for a huge increase in military spending, there are almost no voices in dissent," Sen. Bernie Sanders (I-Vt.), a 2020 presidential candidate who voted against the 2019 Pentagon budget, wrote for In These Times earlier this year.

The People Over Pentagon coalition is urging 2020 Democrats to not just oppose increases in war spending, but to call for significant cuts.

"America needs leaders who will speak plain truths about Pentagon excesses and waste," Robert Weissman, president of Public Citizen, said in a statement. "Presidential candidates should show leadership by talking about deep cuts in Pentagon spending and how the savings could be used for other pressing purposes. Our coalition aims to make reallocation of Pentagon spending an issue in the presidential campaign."

On Thursday, the coalition sent letters to all 26 Democratic presidential hopefuls, urging them to commit to the following three goals:

"Pentagon spending has spiraled out of control," the letters read. "It is long past time to eliminate excess Pentagon spending and invest the savings in urgent domestic and human needs priorities—environmental protection, education, infrastructure, healthcare, and more—that will make the United States stronger and more just."

The coalition suggested more than 20 ways the Pentagon budget can be cut by $200 billion each year "without undermining national security or capabilities." The list of options included:

"Spending more than half of discretionary taxpayer dollars on the Pentagon fails to make America safer at the cost of other vital needs like job creation, healthcare, and solving climate chaos," said Paul Kawika Martin, senior director of policy and political affairs at Peace Action. "At the same time, the U.S. short shrifts funding for diplomacy, development and other tools that prevent wars in the first place. We need bold leadership to break the hold of what President Eisenhower deemed 'the military-industrial complex.'"

The new campaign to shift funds from the American war machine to domestic programs and international diplomatic efforts comes as the Trump administration continues to escalate tensions with Iran, heightening the chances of yet another devastating war of choice in the Middle East.

According to the Associated Press, the Pentagon on Thursday plans to present the White House with a strategy that would send 10,000 more American troops to the Middle East to defend against unsubstantiated "Iranian threats."

Sean Vitka, counsel at Demand Progress, said in a statement that 2020 Democratic presidential candidates "must reject Donald Trump's continued march toward militarism and the decades of unnecessary wars that precede and continue under him."

"The progressive policy on wars of choice is clear: the left is done paying for warmongers to squander human life and resources," said Vitka, "and we will not support candidates who fail to pledge to reverse this horrific course."