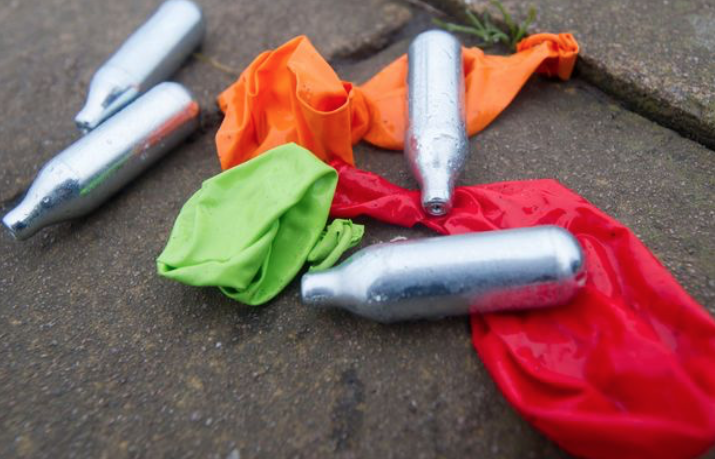 VOICES-Several years ago, I found thick colorful balloons and metal objects similar to fat bullet casings in my home. I soon learned that those items were evidence of recreational nitrous oxide abuse and my high schooler had developed a life-threatening addiction. He fed this addiction by easily purchasing staggering amounts of “Whippits” in neighborhood smoke shops.

I’ve since become a mom on a mission, advocating for the passage of SB 193, a California Senate Bill, that would criminalize the sale of nitrous oxide in smoke and tobacco shops.

Recently, I paid a visit to a local smoke shop. In plain sight nestled between various other inhalant devices, were cannisters of nitrous oxide (and paraphernalia used to inhale the gas). The display was clearly designed to appeal to a variety of demographics -- Erotica Cream Chargers featured a woman with a mischievous smile wearing dollops of whipped cream on her naked breasts; Premium European Special Blue was distinguished by an angry blue and white fire-spitting dragon; and of course, Whip Its! The Original in its royal blue box boasted a happy homemaker showing off her cream dispenser or, in drug parlance, her “cracker”. Within minutes I walked out the door with a carton of Whip Its! The Original, my very own brushed nickel cracker used to propel the gas into a balloon, and a few colorful balloons to suck the deadly drug into my lungs. All bundled in a discreet black bag for the “party” I told the clerk I was giving that night. 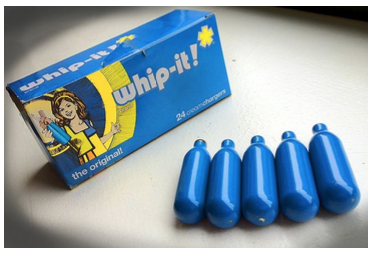 Whippits, NOZ, Hippy Crack, and N2O are some of the street names for nitrous oxide, which is a clear, colorless, liquefied gas with a slightly sweet odor. When inhaled, it provides a short, yet intense euphoria sometimes described as thirty seconds of absolute bliss -- a little like being back inside the womb. For most drugs this powerful, one would need to find a shady dealer or consult the dark web.

But this high can be found in plain sight in smoke and tobacco shops on virtually every square mile of Los Angeles. As an added bonus for those who want to use drugs and not get caught, it’s 100% undetectable in drug tests. And it’s cheap. I paid $12 for a carton of 24 cannisters.

But here’s where the fun ends. When a person inhales nitrous oxide, he is playing Russian Roulette with his life. There’s a very real chance he could die or be permanently disabled during the first inhale, or any of those that follow. According to the National Institute of Health, inhaling nitrous can cause seizures, nerve damage, blindness, coma, heart failure, and death from asphyxiation.

And that blissful womb-like feeling? That’s the feeling of brain cells starving for oxygen.

There are numerous personal accounts of nitrous oxide’s addictive properties and inhalant-induced brain damage and death. The abuse of nitrous oxide was implicated in the suicide of professional basketball player Tyler Honeycutt.  In November 2018, a student at Ohio University died from asphyxiation due to nitrous-oxide with cannisters scattered near his body. A friend of mine lost her brother due to asphyxiation from huffing this substance.

One woman started doing whippits at music festivals, then quickly became addicted, buying 700 cannisters at a time at her local smoke shop. When she became unable to walk or use her hands one morning, a brain MRI revealed damage much like that of people who’ve suffered strokes.

Equally as alarming to non-users as well, recreational use of nitrous oxide leads to unforeseen tragedies involving innocent bystanders. Stories in the news describe multiple fatalities and car crashes where the driver, high on nitrous, passes out behind the wheel. Recent news has  reported that several teens in the Los Angeles region have been killed in car accidents linked to the use of nitrous oxide. Also, the increased use of this drug is leading to a wave of teen deaths, acts of violence, and sexual assaults, as the victim is too stupefied to resist.

Last November, the Los Angeles Times reported that an 11-year-old girl was killed at a Boyle Heights intersection by a driver simultaneously speeding and inhaling NOZ. Another fatal accident involved a young man high on whippits who drove his car into a family of four walking on the sidewalk. Police found 12 used canisters inside his duffel bag, along with evidence of their purchase from a local smoke shop.

This colorless sweet-smelling gas is legally sold in California when used for the following purposes:

As smoke shops are not in the business of performing oral surgery, boosting a gas engine’s horsepower, or selling frothy lattes, they should not be allowed to promote the ILLEGAL use of nitrous oxide. While my son is now sober, the fact remains that any time of the day or night he can walk into a smoke or tobacco shop and purchase everything he needs to resume his deadly game of chance.

Nothing good can come of this.

California Senate Bill 193 makes the sale of nitrous oxide in smoke and tobacco shops a criminal offense. As it was unanimously moving through the legislative process, the Senate Appropriations Committee pulled it and placed the bill on “suspense.”

A special hearing is set for Thursday, May 16 to determine its fate. If passed, SB193 will move to the Assembly, and then on to the Governor’s desk for signature. If this important bill is not advanced, it will die a silent death and nitrous oxide will continue to be recreationally sold in stores across LA. This long-overdue legislation is currently California’s only chance to stem the widespread flow of this deadly drug and hold those responsible accountable. Time is of the essence if we are to save the bill’s life, along with the health and well-being of many Angelenos.

Please contact your California State Representative immediately and voice your support for SB 193. You can also contact the members of the State Senate Appropriations Committee.

(Barbara Straus Lodge is a writer in Los Angeles and a co-founder of Above the Noise Foundation, which creates sober music festivals. A version of this piece originally appeared as an Op-Ed in the LA Times.)