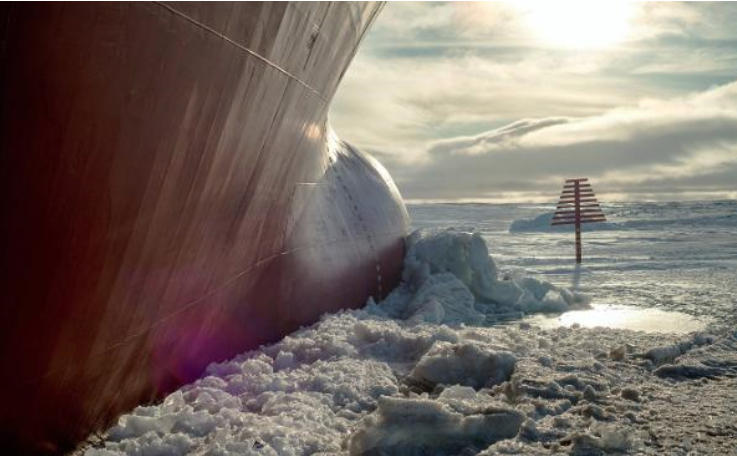 FROM CATASTROPHIC TO APOCALYPTIC-America’s Secretary of State Mike Pompeo, (photo below) speaking at the prestigious Arctic Council biannual meeting in Finland, christened the Arctic meltdown: “A wonderful economic opportunity for international trade.”

In a nutshell, here’s a critique of the Secretary’s advice: An ice-free Arctic reduces travel time for shipping lanes between Asia and the West by three weeks, which qualifies as one of the biggest transport revolutions since cargo planes first crossed the Atlantic in the early 20th century.

Additionally, more goodies are at stake, as highlighted by the portly Secretary in his address in Finland: “Arctic sea lanes could become the 21st century Suez and Panama Canals. Pompeo also called the region, which has lost nearly 90,000 square miles of sea ice since last year, the forefront of opportunity and abundance. It houses 13 percent of the world's undiscovered oil, 30 percent of its undiscovered gas, an abundance of uranium, rare earth minerals, gold, diamonds, and millions of square miles of untapped resources, fisheries galore, he said.” (“Mike Pompeo: Reductions in Sea Ice Will Open Up Trade Opportunities,” The Daily Beast, May 6, 2019.)

The Arctic is the newest frontier for commercial interests, drilling, mining, and fishing galore, with remarkably little concern for spills or accidents in one of the harshest yet most sensitive ecosystems on the planet. The Secretary also emphasized American supremacy, by putting both China and Russia on notice for their “aggressive behavior.” 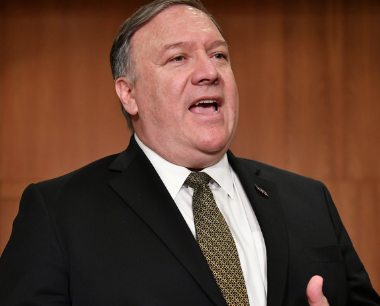 Surprisingly, there is a silver lining within this exercise of pomposity and heavy-duty bombast by Mr. Secretary ignoring, rejecting the inherent dangers of global warming and clearly stating a preference for complete meltdown of the Arctic. Thereafter, the most powerful forces of nature will be un-leashed much sooner than would otherwise be the case. Still, there is a surprising silver lining to all this nonsense.

The Secretary’s exercise in pomposity and heavy-duty bombast ignores and rejects the inherent dangers of global warming and clearly states a preference for a complete meltdown of the Arctic. When this happens, the most powerful forces of nature will be un-leashed much sooner than would otherwise be the case. Still, there is a surprising silver lining to his nonsense.

Counterintuitively, Pompeo’s blatant push for celebration of an ice-free Arctic helps the world community avoid the gravity of circumstances. Furthermore, for the first time ever, the Arctic Council did not issue a joint statement after the Finnish summit concluded. The sticking point was U.S. insistence upon “watering down the climate change statement,” thereby disrupting worldwide efforts to wholeheartedly address the issue in proper forum.

Not surprisingly, upon leaving the summit, Secretary Pompeo mysteriously, on very short notice, canceled his scheduled meeting with German Chancellor Angela Merkel in Berlin, wondering whether she might slap the daylights out of him, until his beetling jowls turn pink.

Again, the silver lining within Pompeo’s pomposity is the inescapable conclusion that the world needs a wakeup call, a kick in the shins, or a hard knock on the head that an ice-free Arctic could be absolutely devastating. So far, the world community doesn’t seem to take the risks seriously, as CO2 emissions are already set for all-time records in 2019.

Therefore, the sooner that rising sea levels hit uncomfortable levels, as an ice-free Arctic serves to hurry up Greenland’s big melt, and the sooner that weird weather patterns destroy more agricultural crops, like the damage done with the Upper Midwest Floods this year in the U.S., the sooner people will get the message loud and clear that something needs to be done on a coordinated worldwide basis. In a weird twisted fashion, Pompeo does the world a favor by helping the climate crisis cruise along uninterrupted by any human influence to reduce or ameliorate it, instead knocking the world on the head with a strong dose of reality.

Henceforth, at the very least, as the reality of iceless Arctic-related problems in the Northern Hemisphere hit in a big way, nations will be forced to prepare their citizens with infrastructure projects like building seawalls around every major coastal city, storing additional grains, closing down or moving nuclear power plants away from coastal flood-surge zones and other preventative measures in anticipation of all hell breaking lose.

In that respect, Pomposity Pompeo will have served the world well by opening its eyes much sooner than otherwise would be the case to this major existential threat. People are forced, for the first time ever, to deal with the harsh reality of upcoming bigger threats.

Scientists know that an ice-free Arctic could take the world down to its knees via (1) Amplification of the big Greenland meltdown, though, alarmingly, rain is already melting Greenland, even in winter; (2) Worldwide grain-production will suffer extreme havoc as loopy jet streams over the Arctic force tropical weather north, and Arctic weather south. In 2019, Kansas, Missouri, Nebraska, with their record snow and record flooding, have already experienced loopy jet streams influencing weird, harsh, record-setting damaging weather; and (3) A massive 50gt burst of methane clathrates out of the East Siberian Arctic Shelf, is kick-starting Runaway Global Warming…the end game.

Regarding the end game, the East Siberian Artic Shelf, similar to a growling creature in the back of a dark cave, is in waiting, eerily similar to the circumstances behind the Permian Mass Extinction, when pretty much every living creature got bumped off, dead as doornails, according to the science: “The release of methane… from permafrost and shelf sediment methane hydrate is deemed the ultimate source and cause for the dramatic life-changing global warming… and oceanic negative-carbon isotope excursion observed at the end Permian. Global warming triggered by the massive release of carbon dioxide may be catastrophic, but the release of methane from hydrate may be apocalyptic.” (Source: Uwe Brand, et al, “Methane Hydrate: Killer Cause of Earth’s Greatest Mass Extinction,” Paleoworld, Vol. 25, issue 4, December 2016)

The scariest sentence of the 21st century: “Global warming triggered by the massive release of carbon dioxide may be catastrophic, but the release of methane from hydrate may be apocalyptic,” bears repeating. Perhaps it should be Pompeo’s epitaph because ignoring the rapidly thinning layer of underwater permafrost that barely covers the massive deposits of methane hydrates in shallow waters (easily warmed up without ice cover) in the East Siberian Arctic Shelf warrants some kind of final recognition.

And, as for the celebrated 2015 Paris Climate Agreement… Where’s Waldo?