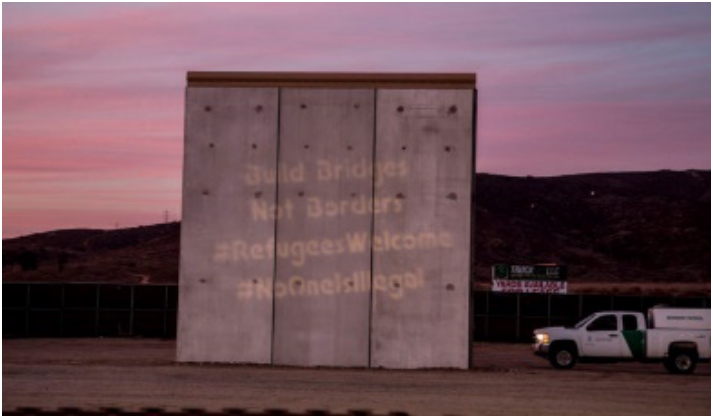 AT LENGTH-That the national broadcast media gave up prime time television minutes in exchange for a metaphoric shadow boxing match over the border wall is telling in and of itself.

After all President Donald Trump is as much a reality TV Frankenstein creation of their own chasing of ratings as he is anything else. That the corporate media actually allowed some short vantage point of “balance” in light of the stalemate on the government shutdown is only telling in that this is what they could do, but usually don’t. Give each side the same amount of time to speak, unfiltered, to the American public at prime time.

Usually we get told stories in sound bites with reporters telling us what this or that politician said, rather than letting us hear for ourselves. I find it rather demeaning that some reporters have to “explain” what is being said in plain English — even though Trump needs an interpreter and an editor, as well as a shrink.

This Oval Office teleprompter version was so completely scripted that Trump ended up having to breathe through his nose just to get through it, as if he was repressing his usual rage and incivility.

If this farce of standoff didn’t have such real-life implications for workers, immigrants and the nation as a whole, it would be seen as a Shakespearean satire. Perhaps it really is just that.

The standoff continues with Trump insisting upon a barrier, a fence or a wall. At this point, he’d accept anything as long as he could claim Mexico was paying for it, while the Democrats point to inscription on the Statue of Liberty, “Give me your tired, your poor, your huddled masses yearning to breathe free.” At this point, it’s an argument over symbols, like kneeling at an NFL game during the national anthem, neither addressing immigration nor racism. This is what Trumpster is good at —raging against the indignity of the symbolic issue, while failing to address the cause of his imagined crisis.

Fact:  illegal immigration at our southern border is the lowest it’s been in years.

Reality: more illegal immigrants are now here because they’ve overstayed their visas and arrive through our airports than cross our land borders, the majority of them coming from Asia.

We don’t hear a lot of hyperventilation emanating from the White House over the hordes coming from the Far East, just a trade war with China over steel and pork bellies.

Yet, the cyber-crime and hacking of computer servers coming out of Asia and Russia seems to be a greater threat to our digital borders, national security and private information than 5,000 Guatemalans are who are fleeing oppression in their homeland.

A new attitude in Congress

Meanwhile, as House Speaker Nancy Pelosi and Sen. Chuck Schumer continue to object to “The Wall” on both practical and political grounds, there’s a new set of younger activist democrats who aren’t waiting in line to take shots at Trump. In a much publicized social media clip the newly elected Democratic Rep. Rashida Tlaib of Michigan made headlines recently for declaring: “We’re going to go in there and we’re going to impeach the motherfucker!” in reference to Trump.

She made the pronouncement at a Washington, D.C. bar, a few days after she made history when she and Ilhan Omar of Minnesota became the first Muslim women sworn into Congress. Whatever she’s drinking let’s send a bottle to every member of Congress.

This younger class of first term congresswomen like headline-grabbing Alexandria Ocasio-Cortez out of the Bronx 14th District, who is a solidly democratic-socialist à la Bernie Sanders, are not going to be politely silent. The other 110 women (81 Ds, 29 Rs), comprise 20.6 percent of the 535 members; 23 women (23 percent) serve in the U.S. Senate, the rest in the House of Representatives.

It appears that the #MeToo movement has now arrived in Washington, D.C. to confront the chauvinism of Beltway politics and will give Trump, the Republicans and the Democratic leadership some opposition.

America has been waiting for this generation to arrive since Nixon was driven from office, Roe vs. Wade won women’s right to choose and the Vietnam War ended. Or, has it just been since Donald Trump stole the 2016 election with the help of the Russians? Whichever it is, I endorse this new attitude.

This Oval Office nine-minute attention-grabbing narrative was false in its very premise and I’d like to hear the new members of Congress, if not the media, call him out on it.

(James Preston Allen is the founding publisher and executive editor of RLnews, where this first appeared. He has been involved in community affairs for more than 40 years in the Los Angeles Harbor Area. His column appears in CityWatch twice monthly.) Prepped for CityWatch by Linda Abrams.