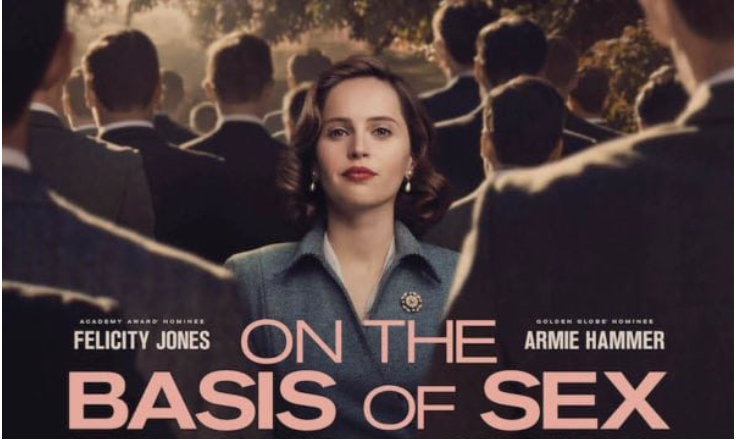 BCK FILE--The Participant Media film On the Basis of Sex is inspired by the challenges faced by Ruth Bader Ginsburg as a young law student and attorney, as well as the groundbreaking 1975 court case, Weinberger v. Wiesenfeld 420 U.S. The future Supreme Court Justice and her husband, tax attorney Martin Ginsburg, argued that gender-based distinction under the Social Security Act of 1935 violated the right to equal protection by the Due Process Clause of the Fifth Amendment.

Ruth Bader Ginsburg was one of the most pivotal figures in changing the legal landscape of institutionalized gender discrimination. Her first case before the Supreme Court, Reed v. Reed (1971) was also the first time the Supreme Court held that the 14th Amendment prohibited gender-based discrimination, as well as race-based discrimination. In 1972, Ginsburg co-founded the Women’s Rights Project at the ACLU and also became the first woman to be granted tenure at Columbia Law School. Ginsburg litigated additional sex discrimination cases during the seventies. Ginsburg and other leaders forged ahead to redefine the role of women, both institutionally and culturally.

Ruth Bader Ginsburg has captured the respect of younger generations, perhaps in part due to the potential setbacks of the feminist movement.

The #MeToo movement and challenges of women in the workplace seem to have brought a new phase to gender rights. Governor Brown has signed a series of bills that go into law in 2019 and beyond, focused on preventing sexual and other forms of harassment and human trafficking. An additional bill promotes gender diversity on corporate boards.

SB 1300: Workplace harassment, sexual and otherwise, has made news in 2018. With SB 1300, employers will no longer be permitted to require workers to sign non-disparagement agreements or agreements not to sue or bring claims against employers under the California Fair Employment and Housing Act. The act bans discrimination based on gender, age, race or other protective statuses. Before, employers were able to require employees to sign these documents as a condition of accepting or keeping a job, as well as to get a raise or bonus.

SB 820: This bill deals with settlement agreements related specifically to sexual harassment and applies to public and private employers, including the Legislature. Civil or administrative agreements can no longer contain clauses that prevent the disclosure of facts. However, the amount paid and the identity of the claimant can be kept confidential, if the claimant desires.

SB 1343: Currently, employers with 50 plus employees must provide sexual harassment training for supervisors every two years. This bill expands this requirement to employers with five or more employees, as well as to include an hour of training for employees within six months of hire date. Employees would have to receive interactive training every two years. This requirement now also extends to temporary and seasonal workers, who must receive training within their first 30 days or 100 hours. By 2020, the mandatory training would extend to agricultural and migrant workers. The state Department of Fair Employment and Housing will be required to develop online training in multiple languages that will be available on its website.

SB 970 and AB 2034 both deal with human trafficking identification and response. The first bill requires certain hotel and motel employees to receive training by 2020 and the second places requirements on employees of passenger rail, light rail, and bus stations by 2021.