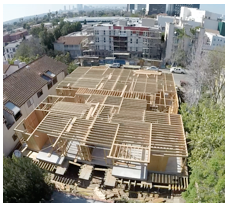 MIRACLE MILE-Approval of a new apartment project at 742 South Ridgeley Drive (photo) was reaffirmed at a February 26 meeting of the Los Angeles City Planning Commission. The commission denied an appeal by Khosrow Ganjianpur, a neighboring property owner.

The project’s developer added two “very low income” units in order to take advantage of the Los Angeles’s Density Bonus Affordable Housing Incentives (SB 1818) to gain a 35% increase in allowable Floor Area Ratio (FAR) from 3:1 to 4.05:1. The density bonus also allowed a height increase from 45 feet to 56 feet. The 25-unit building will have 46 parking spaces.

City Planning grants “On menu” density bonuses over the counter without public hearings and can only be appealed by abutting property owners or occupants. Mr. Ganjianpur filed an appeal because he felt the project was under-parked and would exacerbate already strained on-street parking resources. But the density bonus ordinance permits such projects to supply the minimum amount of parking.

Mr. Ganjianpur also feared that the increased height of the project would create shadow issues for his property. But the City does not require shading impact studies on projects below 60-feet in height and the new building on Ridgeley missed that threshold by four feet.

Apartment developers in the Miracle Mile routinely add low-income units to qualify for automatic increases in height and square footage that circumvent community input or opposition. The ordinance is expressly designed to prohibit appeals by community organizations, such as the Miracle Mile Residential Association.

The “social good” of encouraging low-income affordable housing in otherwise luxury market rate apartment buildings is undermined by the City’s notoriously lax enforcement of conditions placed on developers. No one knows for certain whether low-income units are actually being rented to deserving tenants or being occupied by friends and family members of the developers.

John Schwada reported in a recent CityWatch that he fears “…that the public could be getting badly hoodwinked – we are allowing the developers to super-size their projects, to work-around our community plans, to create new environmental impacts and yet we don’t have a very firm fix, I believe, on whether we’re getting the benefit of low-income units being rented to eligible tenants.”

The MMRA has a long and successful history of working with developers to mitigate an array of issues including height, shade and shadow, parking, and traffic impacts. But now State and City density bonus laws (SB 1818) have cut us out of the loop. We have been silenced.

The density bonus laws have also impeded the community’s ability to negotiate mitigations for new condo developments. If condo developers seeking public support for variances feel that the neighbors are being too “demanding,” they can threaten to switch to a density-bonus apartment project. Indeed, this was the case last year when a proposed condo project at 938 South Orange Grove Drive suddenly became an apartment building to evade opposition from nearby residents.

The use of the Ellis Act to evict longtime tenants from historic duplexes and small apartment buildings coupled with SB 1818 Density Bonuses incentives are encouraging the steady destruction of the last vestiges of “affordable” housing in the Miracle Mile and many other Los Angeles neighborhoods.

These smaller, older, rent stabilized buildings are being replaced by large high-end apartment projects that are “pricing out” working and middle class tenants.

The MMRA represents renters and homeowners alike. A Historical Preservation Overlay District (HPOZ) is the only existing way that the community can be guaranteed any voice in new apartment or condo development in the Miracle Mile. And it is the only way to protect our longtime renters.

(Ken Hixon is the editor of the Miracle Mile Residential Association Newsletter and a member of the MMRA board. He can be reached at: [email protected])