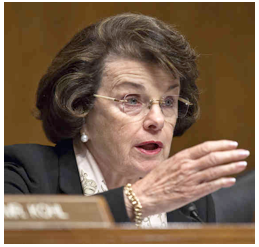 DEATH POLITICS-U.S. Sen. Dianne Feinstein (D-Calif.) came out in support of California's End of Life Option Act on Tuesday in a letter written to the assisted suicide bill's authors and obtained by The Huffington Post.

“The right to die with dignity is an option that should be available for every chronically suffering terminally ill consenting adult in California,” she wrote to state Sen. Lois Wolk (D), who authored the bill with state Sen. Bill Monning (D). “I share your concern that terminally ill California residents currently do not have the option to obtain end-of-life medication if their suffering becomes unbearable. As a result they may well experience terrible pain until their illness has taken their life naturally.”

The California bill is based on successful legislation in Oregon and other states and would authorize physicians to practice aid-in-dying on terminally ill patients in the state. Patients may seek the option only if two physicians have given them a prognosis of six months or less to live, if they submit a written request and make two oral requests to a physician at least 15 days apart, and if they have the mental competency to make decisions about their own health care.

Introduced in January, the bill came two months after California resident Brittany Maynard, a 29-year-old diagnosed with terminal brain cancer last April, reignited the "death with dignity" debate when she moved to Oregon to have a physician-assisted suicide. In her final months, she became a vocal advocate for making the option more widely available, and her family stood with the bill's authors when it was formally announced.

The Catholic Church has come out strongly against similar bills in the past. However, the Los Angeles Times reports that disability-rights activists, who argue that terminally ill patients already have the option to discontinue treatment and be sedated, are leading the charge against the California legislation.

(Lydia O’Connor is a San Francisco editor for The Huffington Post. Before joining HuffPost, She  is a fifth generation Californian and graduated from the University of Southern California's Annenberg School for Communication and Journalism. Posted originally at HuffingtonPost.com)