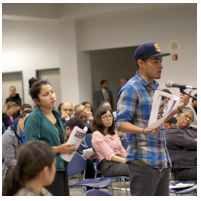 THE CITY- Accused of smirking her way through Metro’s heated community meeting on the fate of Metro-owned properties in Boyle Heights by an agitated attendee, a clearly flustered Jenna Hornstock (Metro’s Deputy Executive Officer of Countywide Planning) had had enough.

“It’s hard to stand up and say, ‘We screwed up!’” she said of feeling like she had been on an apology tour since last November, when Metro bypassed the community engagement process and announced they were seeking to grant Exclusive Negotiated Agreements (ENA) to proposals for Mariachi Plaza and affordable housing projects at 1st/Soto and Cesar Chavez/Soto.

Agreeing that the community had indeed been overlooked, Hornstock declared to the packed house at Puente Learning Center that she was not smirking. Rather, she was trying her best to absorb the pain and heartfelt concerns of residents who feared being displaced — both culturally and economically — from their community.

But as residents continued to hammer her about the fact that implementing federal housing guidelines — the calculation of rents using the Area Median Income of LA County ($81,500) and the use of federal funds to build the sites — would harm the community by both pricing out area residents and opening up the applicant pool to folks from outside the area, she couldn’t help but throw up her hands.

“I don’t know what we should be doing,” she said citing the very real economic dilemma affordable housing proponents and projects face. “If developers can’t fund projects, they won’t build them.”

That dilemma is precisely why people seemingly counterintuitively cry “gentrification” when told affordable transit-oriented housing projects are coming to their communities.

In the case of Boyle Heights, for example, the median income is $33,325 — far below LA County’s median. And because it is the median and not the average, the number of households earning less than $40,000 per year is nearly three times that of those above the threshold.

The majority of Boyle Heights residents would easily meet the first set of qualifications by falling below the maximum income limits set (calculated using percentages of the county AMI) on affordable units.

The problem is, as well over 9,000 households earn below $20,000 a year, a great many of them will struggle to the meet minimum income limits and the resulting rents developers may set for the apartments (see a sample set of requirements from the East LA Community Corporation below).

So, while the units would indeed go to lower-income families that met the income and other qualifications, those local residents needing to be closer to transit and/or escape sub-standard housing conditions, over-crowded (or even illegal/unsafe) apartments, rising rents, or underhanded landlords would likely be shut out of the mix.

Moreover, entrepreneurs and small businesses in poor communities like Boyle Heights are generally lacking in technical capacity and/or capital. Meaning, they can neither meet the requirements set by developers nor afford the rent to be able to set up shop in the retail spaces set aside in newly-built sites. As developers find they can only fill those spots with chain stores or entrepreneurs from outside the area who may cater to a slightly better-off clientele, it helps fuel residents’ sense that such projects are built with everything but the community in mind.

“That sucks you have no control over [federal guidelines],” complained one commenter, “and yet you’re going to implement [them] anyways.”

An embattled Hornstock declared that having to navigate these very real limitations to try to find a viable solution was no picnic and that, truth be told, it would be easier to “go home and snuggle with my kid.”

“When I took over [the position] five months ago, I was hearing people were upset that we had done nothing…they were tired of vacant lots,” she said, frustrated. Now, it seemed, people were angry because they were trying to do something that would benefit the community.

“We can close up shop, if that’s what you want…” she began.

“Wait for the right developer!” shouted a young man who, when commenting earlier, had declared that Metro’s development efforts were better understood as a political ploy and that he would “be damned if Boyle Heights [was] going to be developed for a profit.”

“…or we can scrap the process and open up bids for markets and theaters and see if we get them…” she suggested half-heartedly, herself sounding unconvinced that this would be a viable solution.

It was clear that we were getting nowhere.

Metro seemed to accept that it would have to begin the process around Mariachi Plaza from scratch, that the proposed interim ENAs for the affordable housing projects might also be in jeopardy, and that whatever happened going forward would have to happen in a more transparent way.

And while it was also clear that there was very little consensus within the community about what residents believed should happen at those sites, two things did stand out to me.

One, Metro really needs to have a better handle on how to maximize the economic development opportunities that arise around transit infrastructure for the existing communities. Simply plunking down a retail/fitness center at a train station really only counts as investment in a site.

It does not, by default, constitute an investment in the people of the area, particularly if one of the indirect consequences of such a development is the eventual displacement of those residents. Area residents and entrepreneurs need to be engaged from the outset of planning so they are ready and able to participate in and benefit from developments when they arrive.

Two, Metro and the city need to find ways to incorporate the value of culture and cultural reference points into their conversations, calculations, plans, and goals. Speaking with two of Genaro Ulloa’s classes at YouthBuild Boyle Heights about Mariachi Plaza yesterday, the most consistent refrain I heard was “culture.”

The students described Primestor’s renderings of the new and improved “Plaza del Mariachi” (below)  as sterile and not even remotely reflective of who they were as a people. Said student Francy Rosales, “they’re trying to paint a picture [of a community] that’s not there” — erasing one and exchanging it for another, more desirable, upwardly mobile, and decidedly blander one. (See more on the original proposed plans, here.)

Recognize this place? Me, neither. But it’s what residents were told was the potential future of Mariachi Plaza. (Source: Metro)

Concerned enough to take the bold step of speaking up at the meeting, students Irwin Plata and Stephanie Olwen (pictured at top), both talked about the importance of culture to Latino youth like themselves, a group whose aspirations are wildly underrepresented in the planning process.

For Plata, the plaza represented childhood, family, culture, music, memories, a safe place to gather with friends, a multi-generational space, and a symbol of the Latino community. Preserving it as such would help keep them connected to their history, their families, and those around them.

For Olwen, who lives adjacent to the plaza with her young daughter and has mariachis in her immediate family, it was even more personal. Development that didn’t take the mariachis into account, she feared, might result in them having to seek expensive permits just to be present at the place that bore their name or to get jobs. Then she wouldn’t be able to get up in the morning and hear trumpets and other sounds that gave her joy and helped remind her of who she was, she said. Or, worse still, rising rents might displace her from a place that felt like home.

“I feel happy being able to take my daughter [to the plaza] to see her culture,” she said. “How is she going to know about her culture [if they are gone]?”

Balancing community-centric development and culture with the very real economic and policy constraints on city agencies and developers will be no easy task. And it is made all the harder by the fact that the agencies don’t have much of a track record of trying to do so, least of all in Boyle Heights.

But as the city pushes for more transit-oriented development here and in other lower-income communities of color (I’m looking at you, South LA), these hurdles will continue to arise if steps are not taken to engage communities more productively and as partners (read: “with intention” and “not just relying on the usual suspects”) from the outset.

The meeting concluded at 9 p.m. with no real answers about what would come next beyond an assertion by Hornstock that Metro was in the process of hiring an architectural design firm to hold design charrettes and a promise to be in touch. Even so, those straggling out did seem to feel that they had been heard and that the process would be much more transparent the next time around.

Wednesday, January 28, 2015, 6:30 p.m.
BHNC Board Meeting – To consider recommendations from the BHNC Planning and Land Use Committee to approve the interim ENAs for the affordable housing projects at Cesar Chavez/Soto and 1st/Soto (see here for details on the interim ENAs). Mariachi Plaza plans may be discussed. Agenda is here.

Thursday, March 26, 2015, 9 a.m.
Metro Board of Directors – To ask Board to consider entering into phased ENAs for1st/Soto and Cesar Chavez/Soto sites, if supported by the community
One Gateway Plaza, Los Angeles, CA 90012

(Sahra Sulaiman is a documentary photographer and researcher who has been 99.5% car-free since buying a road bike and riding it across Spain on a dare in 1996. This piece was posted first at the excellent LA.Streetsblog.org).