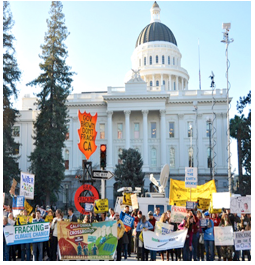 NO FRACKING REPORT-Inspired by California’s worst drought in 500 years, record melt of Arctic Sea ice, and worldwide extreme weather events, climate and clean energy marchers have gone into the streets several times this month to demand urgent action on climate change. From Sacramento to Washington DC, to the Port of LA, thousands of activists have exercised their power as a united movement of organizations and individuals from faith, labor, youth, environment, and communities, calling for an end to extreme energy proposals like the Keystone XL tar sands pipeline and hydraulic fracturing or fracking.

Organized by the statewide coalition Californians Against Fracking and more than 150individual environmental and public health organizations, the protest and march featured speakers from around California forced to live with fracking in their communities and organizing to end the use of this toxic way of producing oil and gas.

"What's clear from Saturday's rally in Sacramento is that the movement to stop fracking in California is something the Governor would be foolish to ignore," said David Turnbull, Campaigns Director of Oil Change International. "Big Oil may have lots of money to throw around the state, but as we sawon Saturday at the rally, this movement is energized, committed, and not going anywhere. The Governor can choose to stand with these concerned Californians and stop fracking in our state, or he can continue to stand with Big Oil. The correct choice was made abundantly clear on Saturday."

Fracking is an intensive process to release and extract oil or gas by blasting water, chemicals and sand at high pressure into deep underground rock formations. Its evil twin, high volume acidization, uses hydrofluoric acid, one of the most dangerous chemical solvents, to dissolve the Monterey Shale formation and gets the oil flowing. From the Sacramento Valley to off the coast in Huntington Beach, hydraulic fracturing, or fracking, is taking place across California, polluting local water and air, accelerating climate change, eroding property values and creating tremendous amounts of waste, the disposal of which has been linked to earthquakes.

On March 2nd, as part of “XL Dissent,” 398 opponents of the proposed Keystone XL tar sands oil pipeline were arrested in front of the White House in what could be the largest youth sit-in on the environment in a generation. Students from more than 80 colleges rallied at Georgetown University and then marched to the White House, wearing mock hazmat suits and holding banners with slogans like "Keep your oil out of my soil" and "Even Voldemort hates tar sands."

As well on March 1st, hundreds of people supported by over 100 environmental, labor, health and community organizations rallied for clean energy and healthy communities in Wilmington-Port of LA—one of the most fossil-fuel polluted communities in the country. As part of a coast-to-coast Great March for Climate Action, demonstrators braved much-needed rain showers, marching from the Port through the streets to Downtown LA, speaking out to impacted communities and demanding government action against climate change.

“We’ve seen climate change coming for a long time, but now it’s here, and it’s getting worse faster and causing greater harm than we ever expected,” retiring Congressman Henry Waxman said in a statement read at the rally. “It is absolutely critical that we address our ever-increasing levels of greenhouse gas emissions by promoting the development and use of more efficient and cleaner energy alternatives.”

The march started in Wilmington because it has the largest concentration of dirty oil refineries in California. They process 650,000 barrels per day of crude oil every day, pouring pollution into the local, regional and national environment. This,coupled with air pollution from the Ports of LA and Long Beach and the trucks moving to- and fro- on the freeways, impacts the local neighborhoods, primarily working class people of color, who suffer disproportional rates of asthma and cancer.

Moreover, there is a recent proposal to ship in tar sands bitumen via rail, a toxic and corrosive form of crude from Canada, into the Valero Refinery in Wilmington, with risks of spills and accidents.

The vast majority of scientific academies agree that the burning of fossil fuels is contributing to more intense heat waves, extreme weather, rising of sea levels, ocean acidification, and the melting of the glaciers.

Scientific studies have shown massive reductions in fossil fuel use is achievable through energy efficiency and conservation, as well as a transition to clean electricity. Instead, we keep pumping the earth dry of its stores of carbon, all for the burning for electricity and transportation. We thus heat the atmosphere, waste and pollute ground and ocean water, industrializing rural landscapes, and causing earthquakes from disposal of fracking wastewater in deep wells.

By average people getting together and speaking out, the power of the oil industry is countered, and politicians and governmental officials must take note. Asked the other night, how do you expect to overcome the billions in lobbying dollars of Big Oil? Boots on the ground. Thousands in the streets. And citizens across the country are making their votes count to ban fracking now, stop tar sands oil from being mined, transported and refined, and to demand climate solutions now.

(Jack Eidt ([email protected]), Founder and Publisher of WilderUtopia, is a novelist, urban planner, and environmental advocate. In addition to writing regular articles for WilderUtopia, he has published opinion/editorials in various periodicals, including the Los Angeles Times, Orange County Register, Voice of OC, LA Progressive, CityWatch LA, Win:Win Journal, and CounterPunch, and has been featured on Pacifica Radio, NPR, and local public television. This column was posted most recently at CommonDreams.org)