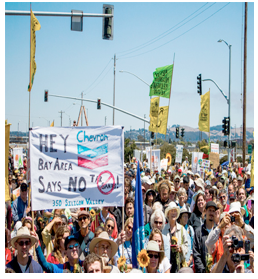 VOX POP - The heat is on for Chevron. The oil giant has for decades shirked responsibility for a multitude of toxic transgressions. Now, a diverse coalition of stakeholders burned by the oil giant's dirty business is using people power to push back.

Last month, 3,000 protesters marched on Chevron's refinery in Richmond, Calif., to commemorate the one-year anniversary of the explosion and toxic cloud that sent 15,000 residents to local hospitals with respiratory problems.

A lawsuit by Richmond's mayor accuses Chevron officials of ignoring public safety concerns.Seventy activist groups, as well as labor unions, nurses, and city residents, took to the front gates of the refinery, expressing outrage at Chevron for ignoring its own inspectors' recommendations to replace the corroded steel piping and calling out the company for its continued refusal to make safety improvements.

Sunflowers in hand as symbols of soil detoxification, protesters like Doria Robinson of Urban Tilth, a local group that operates more than a dozen community gardens in Richmond, spoke about the devastating effects of the toxic plume on the local ecology.

"We had to tear out all of the food we were growing because we didn't know if it was contaminated or not," Robinson recalled. "It was absolutely devastating."

A day earlier, Richmond Mayor Gayle McLaughlin announced that the city had filed a lawsuit against Chevron, listing 14 other toxic gas releases since 1989 and accusing officials of maximizing profits and executive pay while ignoring public safety concerns.

Putting additional pressure on one of the biggest extractors of fossil fuel in the world, 350.org brought its Summer Heat campaign to the rally. They also brought author and activist Bill McKibben, who addressed the crowd and encouraged civil disobedience. More than 200 activists were arrested—including a 90-year-old grandmother. The arrests stopped only when the police ran out of zip cuffs.

Summer Heat came on the heels of another recent rally at the company's Annual General Meeting, where Chevron shareholders got an earful at corporate headquarters in San Ramon, CA.

"Just how many shareholders wish to be dragged to hell by the company's lawyers?"Concerned with issues ranging from its response to the $19 billion environmental disaster in the Ecuadorian Amazon, to the company's unprecedented election-related spending, to its refusal to invest in renewable energy, several hundred protesters gathered to urge Chevron to clean up its act.

Servio Curipoma, who lost both his parents to cancer caused by billions of gallons of toxic wastewater Chevron/Texaco illegally dumped in the Amazon rainforest, told his tragic story to shareholders and presented Chevron CEO John Watson with a large, symbolic "pink slip." Watson's pledge to fight the Ecuador judgment "until hell freezes over" elicited a strong response from Simon Billenness, representative of Investor Voice and Zevin Asset Management. "Just how many shareholders wish to be dragged to hell by the company's lawyers? This shareholder certainly does not."

Chevron's possibly illegal contribution to a conservative SuperPac during the 2012 election, the largest single contribution by a publicly traded company in the wake of the Citizens United Supreme Court decision, received a lot of attention. Public Citizen arrived with 26,000 petition signatures and Green Century Management filed a shareholder resolution calling on Chevron to stop spending on elections.

The corporation's refusal to become a responsible twenty-first-century business has awoken a sleeping giant."It is concerning that Chevron's board of directors insists on spending unprecedented and increasing amounts in the election process," said Lucia von Reusner, shareholder advocate for sustainable investment firm Green Century. "Chevron is rolling the dice with its spending and the losers are our democracy and shareholders."

Before the end of the annual meeting, activists holding "Corporations are not people" and "Get big money out of politics" signs were greeted by a cheering group of cyclists descending on Chevron's front gate with flags that read "Go Renewable" and "Free America from the tyranny of oil."

While there are no signs that Chevron is going to give an inch, it's safe to say that the corporation's refusal to become a responsible 21st-century business has awakened a sleeping giant: the people.

Keeping the heat on a corporation that made $26 billion in profits last year alone is no small task, but all the money is worth a little less if it no longer buys a polluter's most coveted assets—public silence and apathy.

(Sven Eberlein is a San Francisco-based writer. He wrote this article for YES! Magazine, a national, nonprofit media project that fuses powerful ideas with practical actions. This piece was published most recently at commondreams.org)