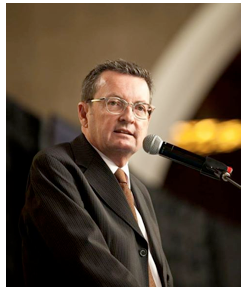 BILL ROSCHEN’S SWAN SONG - In July 2013 Bill Roschen, the outgoing President of the Los Angeles City Planning Commission, ended his many years of service by asking the Department of City Planning what could be done to correct the observable failures of the Baseline Mansionization Ordinance.  In his view the case of the Beverly Grove neighborhood, which has waged a nine-year battle to stop McMansions, demonstrated that this ordinance, adopted in 2008, did not work.

Mr. Roschen’s remarks could not have been timelier.  The answer that City Planning presented to Mr. Roschen was to address the on-going problem of mansionization through Recode LA, the new, five-year program to rewrite the Los Angeles zoning code.

So, what about this suggestion?  The short answer is that it is most likely a long detour through a blind alley.

This is because LA’s two citywide “anti-mansionization” ordinances were so compromised with bonuses and exemptions that contractors and investors have continued to build the very same super-sized houses throughout Los Angeles.

Furthermore, this mansionization process is likely to accelerate over the next five years because another housing bubble is underway.  During this five year period, while LA’s zoning code is slowly rewritten, thousands of additional older homes will be leveled by real estate speculators and replaced with boxy, suburban-style tract homes that tower over older, adjacent houses.

Furthermore, these over-sized houses, even when they are labeled ‘green” by the Department of Building and Safety, are energy hogs.  Because they use so much energy and are responsible for so much pollution from their large cars, pools and spas, restaurant-style appliances, and whole house 24/7 air conditioning, they undermine LA’s legal requirement to implement AB 32 and SB 375, the State of California’s most important climate change laws.

Furthermore, there is no guarantee that at the end of the five-year Recode LA process, the rewritten Zoning Code will correctly amend either flawed mansionization ordinance.  This is because corrective anti-mansionization amendments, though minor, would still require a portion of the new zoning code to become more restrictive.  This conflicts with the agenda driving Recode LA: to make the existing, cumbersome zoning code less restrictive.  Given this long time line and unsure outcome, what then are the alternatives to finally stop mansionization in Los Angeles?

The first amendment would be the elimination of the Green Building Bonus, a gimmick that allows contractors to expand the size of a house by 20 percent if they claim, but never need to demonstrate, that the house is energy efficient.

The second amendment is also simple: eliminate the square footage exemption for attached garages.  These double garages at the front of McMansions not only incentivize automobile use, but are also excluded from floor area calculations.  If Building and Safety was forced to include attached garages in its calculation of house size, McMansions would be at least 400 square feet smaller and some of their garages would be built at the rear of the lot, not at the front of the house.

These two, simple amendments could be prepared and adopted over a period of several months, not five years, and offer immediate protection to the many Los Angeles neighborhoods now being devastated through the mansionizers’ unchecked, short-term real estate speculation.

The current option, the creation of a Residential Floor Area District (RFA) in a small area to prevent mansionization, is slow and uncertain.  So far, only two neighborhoods have managed to get an RFA adopted since they were first allowed in 2008: Sunland-Tujunga and Studio City.  Two new RFA’s are now in the works after many years of intense campaigning by local residents: Granada Hills and Beverly Grove.  Furthermore, three other proposed RFA’s – for Valley Village, Beverlywood, and Brentwood -- already met their demise when City Planning ignored their adopted City Council motions:

Given these existing options, we can expect many Los Angeles neighborhoods to request RFA’s, and Councilmembers and the Department of City Planning will then face stark choices.  They can ignore old and block new RFA motions, at which point they will have informally vetoed an adopted zoning ordinance and nullified legally adopted anti-mansionization planning policies.  Alternately, they can prepare and adopt the many RFA’s that will surely be requested, an option that will bog down City staff in the intricate and labor-intensive preparation of many small, nearly identical overlay districts.

Either option is bad for the City of Los Angeles.  If elected officials and the Department of City Planning ignore the fully justified and legally correct neighborhood requests for RFA’s, as is likely, City Hall will be accurately seen as pro-mansionization.  Their actions will also conflict with the City’s own adopted zoning laws and official city planning policies.  If they nevertheless pursue multiple RFA’s, they will shift City Planning staff from other important citywide projects, such as updating the many mandatory, but outdated elements of the Los Angeles General Plan.

At this point, Bill Roschen has placed the ball in the court of City Planning, but also the 15 City Council offices.  Will they lie low while neighborhood after neighborhood is mansionized to resemble the LA region’s far-flung auto-centric suburbs?

Will they reject all or nearly all requests for relief from McMansions through RFA’s by claiming City Planning does not have the staff resources?

Or will they choose the elegant and simple solution: a few small amendments to the Baseline and Hillside Mansionization Ordinances to stop mansionization in 2013, not in 2018?

(Dick Platkin is a city planner who serves on the board of the Beverly Wilshire Homes Association.  Past articles on mansionization and other local planning topics are available at www.plan-itlosangeles.blogspot.com.  Please send any questions or comments to [email protected]. )