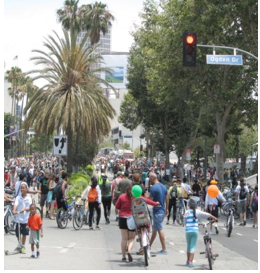 FIRST PERSON - Today’s CicLAVia was, in my opinion, almost perfect. It was always my dream for it (long before it actually got off the ground) to be an event that closed all of Wilshire from Downtown to the beach, to allow the city to celebrate car-free-ness on a regular basis.

For me, having Wilshire be the route would make it a core location that meant the city was serious about the event, would mean a lot of participation linking East and West, and perhaps most importantly, would give a lot of room, since Wilshire is a really wide street. Perhaps that it is a long way off to have the whole of Wilshire be used, but they came close to the dream by having a Wilshire one today.

The route ran from where Wilshire starts (at Grand) all the way out to LACMA at museum square at Wilshire and Fairfax. I rode it with a friend in the middle of the day and it was a lot of fun. See below for some of the things we did. Also, watch the timelapse video I made (embedded later) which has some fun stills embedded in it as well.

You might recall some of the things that I felt the need to mention concerned me after the last CicLAVia. In that post I was most concerned about the narrowness of the route (they only used half of Venice for much of the way) and the fact that the resulting compressed group of people got even more compressed with the numerous traffic stops that there were. It was unpleasant and possibly dangerous.

Well, there was not a hint of that here. They had both sides of Wilshire open, and relatively few traffic stops. This meant a lovely free flow of traffic for people of all speeds, ages, and mode of transport. The other main concern I had was that the event did not leave enough time for people to explore the route, leaving a number of people stranded, which is not good for a lot of people who are infrequent riders – they’ve got to get home cycling in traffic that they might not be ready to do yet.

Well, today they extended the time by two hours, making it run from 9:00am to 4:00pm. Brilliant. I suspect that helped also with the potential congestion since people participating get spread out over a longer time.

Overall, I must congratulate the organizers for a nearly perfect event. Now if only we can have Wilshire open all the way to the beach for a CicLAVia, I’d be in heaven.  (Read the rest of Clifford’s first person take on Sunday’s LA CicLAVia … and see his timelapse video of the event … here)