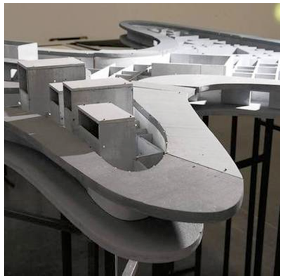 CRITIC’S VOICE - So much appears to have gone horribly wrong in the preliminary design of Peter Zumthor’s rebuild of the Los Angeles County Museum of Art, it is almost impossible to know where to start; but before or after you read this post, you can see the designs in the LA Times on-line review by Christopher Hawthorne. So here are just a few first thoughts.

The proposed new mega-structure would be an immense dark grey concrete mass (reminiscent of 1960's New Brutalism style) - built on stilts rising over 30 feet above the ground; a stylistic choice once partially embraced by the much unloved ‘waffle building’ at UCLA also built in the 1960’s.

This costly engineering decision to elevate the entire new campus three stories into the air would then plunge much  of the building’s huge, sprawling footprint (sprawling since it will be a  single story building replacing multiple multistory buildings) into an often sunless darkness.

The affect of this structure on Wilshire Boulevard will be equally chilling.  Rather than embracing and opening up to the street, the new building will equally ignore street and sidewalk, and instead hover over 30 feet above them (becoming all but invisible to passing cars) - much like the long decried elevated concrete pedways of Bunker Hill built in the 1970’s, but planned for in the 1960’s.

The building’s complete removal from the public realm is particularly surprising since the current campus’ perceived lack of engagement with the sidewalk is one of the reasons why some critics – including director Michael Govan - have called for its removal.

But rather than settle for the current mere ‘disengagement;’ Zumthor has instead proposed to build a physically aloof and alien presence that will look magisterially, if not, disdainfully, down upon the rest of the city.

Equally as bizarre, despite the fact the biggest criticism of the Anderson Building has been that it hid the once highly visible public access to the museum; the new building will replace that long hidden easily readable communal entry and orientation space with 7 separate 30 foot-plus tall staircases, each one encased within one of the massive concrete supports.

Then in a stunning Orwellian example of new speak, the decision to refuse to provide an understandable and easily accessible public entrance is proudly proclaimed to be a courageous strike for openness and tolerance.

Somewhat more tellingly, these seven staircases are also described as a way for the architect to "control the way visitors first come into physical contact with his architecture."

The next big surprise is that the project’s grand architectural gesture – the massive and meandering amoeba-like exterior of the building – turns out to have... absolutely nothing... to do with any of the interior uses of the building.

All that architectural strum und and drang exists to encase a grand total of 7 traditionally shaped, rectangular art galleries to house the permanent collection – and hallways that will connect those seven traditionally formed galleries with each other.  Everything else about the exterior is simply the decorative ‘box’ those boxes came in.

But that is still a lot better than what appears to be proposed for the temporary shows.  It seems they will be installed in the hallways that will connect the main galleries.... with glass walls on one side and the art work installed on the other side of the walkway.

In too many ways, the building’s ability to function within the urban infrastructure and its ability to properly display art appears to have by the end of the process, despite all the great and idealistic intentions of everyone involved, become an after-thought to the theoretical and architectural conceits.

But there is some good news about this plan. It all but guarantees a reprieve for the existing campus.  It creates a second opportunity to rethink the long outdated 1960’s concept that the best – if not only - way to create the future is by demolishing the past.

And be certain to read Christopher Hawthorne's review (which is very different than my own) in the Sunday LA Times.

(Brady Westwater is a writer and an occasional contributor to CityWatch. He blogs at http://lacowboy.blogspot.com/)