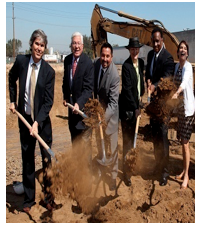 if you check off ANY of the items except for “Residential Rehabilitation,” federal HOME and HUD funds meant for your houses will be taken away by developers who have and will build low-income apartment buildings.

The wording of the city’s survey may seem nice—and for developers who get the free money to build Section 8 housing, it is very nice: they get to use your money to install appliances and make their low-income apartment buildings look nice while they collect Section 8 rents.

How does this bamboozle work?

A letter from the CA Department of Finance dated April 6, has declared that “the Regent Square loan receivable in the amount of $13.9 million continues to be denied.”

What does this mean? It means that residents of Inglewood are on the hook for the $14 million that the State of CA wants back owing to yet another “mistake” made by the city.

The developer, Burbank-based Chandler Pratt & Partners LLC, has its money and will not be affected by this recent decision.

In their first attempt, “the Developer requested up to $14.5 million in Agency assistance in the form of a first-time homebuyer assistance program,” according to a letter from City of Inglewood’s Redevelopment Agency and addressed to the Agency Board of Directors on July 20, 2010.

It is the language “first-time homebuyer assistance” that should raise a red flag, for it is similar to one of the categories in the current CDBG survey sent out by the same people who approved Regent Square.

Regent Square is a 145-unit building that was approved in February 2011 by a city council led by mayor James T. Butts. The same month, Chandler Pratt —which financed and constructed the “affordable family apartments”—gave three donations to the James Butts for Mayor 2011. The donations were submitted on February 2 and April 29, 2011 and totaled $2,000.

The decision to “adopt [the] resolution and approve the Issuance of Tax Exempt Bond Financing...to finance the development by Chandler Partners and Faithful Central Bible Church, a joint venture, of the Regent Square residential housing development, located at 527 West Regent Street” was made on February 8, 2011—just six days after the first set of donations.

Little was a contributor to the James Butts for Mayor 2010 campaign, according to California Form 460 filed with the city clerk’s office.

Faithful Baptist was also the church where a remarkable number of events hosted by the mayor have taken place. The most recent was a hiring fair for the orange County construction firm, Clark Construction. Other events that took place in the last few months included the mayor’s highly politicized “town hall” meeting as well as an earlier “hiring” event—also for Clark Construction.

Both Ted and Glenda have been at nearly all of the events that the mayor has hosted this year, and often times one or the other is a speaker. Both have been quoted in the Inglewood Today, a paper owned by one of the mayor’s paid political consultants. Most notable are the campaign contributions from Glenda Brass to the James Butts for Mayor 2011 campaign which she submitted on April 15, 2011.

Along with Butts, both Brasses are featured on the www.527regentsquare.com website standing with the developer’s principal, Ted Chandler.

Now the city has its hand out again—and there are several new “affordable” apartment projects that are shovel-ready. Nearly all of these new low-income apartment buildings are partnerships between developers from anywhere but Inglewood and any one of Inglewood’s numerous non-profits. (According to IRS tax-exempt 501(c)(3) documents, Inglewood is home to more than 700 non-profits—most of which were chartered in the last 13 years.)

The developers will not be investing their money. They will use HOME funds that will be reallocated by way of the CDBG surveys that the city has sent out. So be sure to return your form by no later than May 28—and be sure to check off ONLY the “residential Rehabilitation.” To check off any others will only allow the current administration to allow their developer and non-profit friends to take your money to build more Section 8 apartment buildings that the State of CA will again declare invalid and then want its money back. the developers will be gone, the non-profits will not be held responsible, the mayor will cry that we need to “forget the past and move forward” and you will be forced to pay higher taxes to replace the money that was taken from you in the first place.

It’s time to stop this nonsense regardless of how long it has been going on. The state of CA is going to sue the City of Inglewood to get its $14 million dollars, and the people paying will not be the developers, the non-profits, the city manager Artie Fields (also pictured on 527regentsquare.com with the developers), the mayor or those who contributed to the mayor and also profited directly from the Regent Square fiasco.

The people who will pay twice for this and other low-income housing disasters will be you: the residents and taxpayers of Inglewood and particularly District 1 who own homes, pay increasing trash, water and many other taxes.

The person heavily responsible for this bamboozle, Sr. Admin Analyst Pam Thigpen, retired on April 30—who helped sign off nearly 30 years of CDBG, HUD and HOME grants—and we are stuck with “moving forward” to “forget the past while a mayor who lies about living in a tool-shed behind the house of his second wife's mother-in-law continues to help himself and his friends to federal funds meant for home-owners.