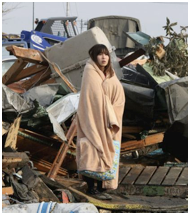 VOICES - Japanese film maker Yojyu Matsubayashe has created a film dedicated to the Fukushima disaster.  Matsubayashe laments, “It was human arrogance that led to this disaster.

We shouldn’t be making excuses that we didn’t know…. we didn’t care.”

There doesn’t appear to be any singular reason for Tokyo Electric Power Co and the Nuclear Industry Safety Agency’s failure to follow best practices and standards in their nuclear operation.  However, there are a number of underlying causes that can be identified. NISA lacked independence from both government agencies responsible for promoting nuclear power as well as from industry. This appears to be the common thread that runs throughout our society in relationship to hazardous facilities associated with the chemical and energy trade.

In the end, the Fukushima event does not reveal any unknown fatal flaw associated with nuclear power itself, but it does underscore the critical importance of periodically reevaluating all hazardous facilities, upgrading them to the highest level of safety, and creating an effective means to regulate and oversee safety management.

Whether it is the catastrophe from Fukushima, San Bruno, Richmond, the Gulf, the recent West, Texas explosion or a pending disaster stemming from San Pedro’s own Rancho liquefied petroleum gas facility, all have a connection to deficient safety resulting from an obduracy to recognize real risk exposures, and a purposeful avoidance in employing the latest and best safety practices.

Recently the US Chemical Safety Board concluded their investigation of the Richmond Chevron refinery fire and publicly announced that the California State Regulations are “deficient” in ensuring public safety.  At a CSB hearing on April 19th in Richmond, CA, CSB investigators also announced that “decisions made by Chevron both on Aug. 6 and in the decade before led to the massive – and preventable – fire.”

One has to seriously wonder just why it is that “we” are not paying attention to the kind of detail necessary to protect our public for an entire DECADE! And, in the case of Rancho LPG, you can multiply that DECADE times FOUR!!  The consequences of ignorance have been clearly and repeatedly demonstrated without any resolve whatsoever to amending that behavior.

The Nationally acclaimed “Master of Disaster”, Professor Bob Bea from UC Berkeley has been the prominent choice of the US in the investigation of the “why” of disasters such as “Katrina”, “San Bruno”, “The Gulf” etc.  In the March issue of The Men’s Journal, Bea (now in his late 70’s) acknowledges his fatigue in dealing with the aftermath of these horrific events and his frustration in the vivid realization that they have all been “preventable”.

In the last few paragraphs of the article, Bea identifies the San Pedro situation as one that is keeping him engaged.  When the reporter presses him on what he sees, his reply is “it is risky, very risky.”

This reference relates to Bea’s review of the Rancho Liquefied Petroleum Gas facility’s massive 25 Million gallon butane and propane storage and its potential of a “domino effect” upon other numerous ignition sources in the harbor with the capability of creating an inferno of unimaginable proportions.

While many have labeled those involved in the fight against this ultra hazardous Rancho facility “extremists”, certainly Professor Bea’s acknowledgement of this facility as a matter of grave concern should turn the political heads needed to deliver a removal of the threat.  However, the situation remains stagnant while the EPA and local politicians jockey around in some political dance to avoid “provoking” the LPG facility’s Fortune 500 owners, Plains All American Pipeline.  “Plains” has threatened to “sue” anyone that attempts to restrict their business opportunity.

The immense 40 year old tank structures of this facility sit directly in the  “rupture zone” of the active Palos Verdes Fault (mag. 7.3) in tanks built without building permits to a supposed seismic sub-standard of 5.5 –6.0.  The area is defined by USGS as “liquefaction and landslide” areas.  Just the other day, there was a 4.0 mag. earthquake recorded 7 miles SW of San Pedro, and there has been a recent flurry of seismic events in the region.

This LPG facility was introduced without benefit of a comprehensive risk analysis and expedited through a fragmented permitting process.  It was instituted against the advice of the LA Fire Marshall and exempted from LA City Fire regulations at the time.

This only scratches the surface of its corrupt initiation and lack of any true compliance to laws.  Meanwhile, there were and are existing neighborhoods within 1,000 ft. of the facility along with multiple schools nearby.

Not unlike the fertilizer operation in Texas who reported to the EPA that its risk for explosion was “zero”, Rancho LPG has submitted a worst case blast radius of ½ mile.   A more accurate estimate of blast radius (using an EPA calculation) from only one of the two 12.5 million gallon tanks delivers a result of over 3 miles.   This is a significant discrepancy but who is checking for the truth?

The ill-advised union, ILWU, has buttressed Rancho’s resolve by supporting them due to a paltry 6 union rail jobs employed by the facility.  As we all know, union support of anything these days has become the gorilla strong arm in the political realm.

This union support comes despite the tens of thousands of people (including their own union members both on the rail and on the adjacent docks) being jeopardized by this menacing operation under its extremely vulnerable conditions.  This Union support has simply ratcheted up the intensity of the political dance.

Sen. Barbara Boxer recently decreed the need for “hearings” on safety at refineries and chemical facilities after the West, TX disaster.  However, her office continues to ignore our citizen pleas for intervention on Rancho LPG and our interest in participating in any effort exercised by the Senator to reduce such dangerous exposures from these facilities.

Congresswoman Janice Hahn, who vowed 10 years ago to “fight” for relocation of the Rancho LPG facility as a City Councilwoman, continues to deliver hard rhetoric but stalls on any substantive action.  Mayor Villaraigosa cautioned me personally as to the “expense” of trying to relocate the operation as simply “undoable”.

Certainly that option would be far less expensive than the $2.1 billion price tag realized from damages in San Bruno!  And, it is obvious that damages from a catastrophe at Rancho, including potential decimation of the Port of LA, could far exceed that financial threshold.

LA City Attorney, Carmen Trutanich labeled Rancho as “no more hazardous than the local gas station.” Enough said.  No mayoral or other LA City candidates in this May’s election were even willing to publicly discuss the significance of this risky situation. It is simply too “hot” for any of them to handle.

Perhaps, the most offensive of all is San Pedro’s newest City Councilman, Joe Buscaino’s circumvention of involvement.  Buscaino ran his entire campaign on a promise of “Public Safety First”!  Since taking office he has proposed toothless Council motions to address Rancho LPG that have remained lifeless for over a year.  This perilous situation lingers while its potential for disaster increases daily.  Those fearing the worst are left to wonder and ask, “why”?

The truth of Matsubayashe’s wisdom in identifying  “arrogance” as being ultimately responsible for Fukushima’s catastrophe takes on great poignancy.  The message that the arrogance brought with it, comes screaming back as the most apparent answer to our own question … “it isn’t because we didn’t know… we didn’t care.”

(Janet Schaaf-Gunter is a community activists and member of the San Pedro Peninsula Homeowners United Inc.  The SPPHU was one of the litigants in the successful China Shipping lawsuit that was represented by the NRDC in 2001-2003 on the issue of air pollution and aesthetics. Get more info: hazardsbegone.com)
-cw