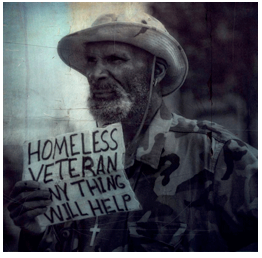 POLITICS AND THE HOMELESS - When all is said and done on the problems of having and dealing with America’s homeless population, we find, as usual, that a lot more gets said than gets done.

And while very few communities will openly admit their disdain for these people who have no permanent place to live, many cities have no problem creatively enforcing ordinances (and passing new ones) that make being homeless far more difficult than it already is; hoping, it would appear, that those without a place to live will move on and not besmirch their fair communities.

Las Vegas, for example, does not exactly make being homeless a crime, but has a curfew (allowed 5 am to noon only), on pets in public which many homeless people keep for safety and companionship.

Sarasota, Florida, has made it a crime to sleep without permission on any city or private property.

Several cities — Sarasota, Atlanta, Denver, and Los Angeles among them — have put severe restrictions on charities feeding the homeless in public places.

One of the main reasons given for this appalling lack of charity, humanity, or respect is money. When cities cite lack of funds as the main reason they cannot provide more beds, jobs, or medical assistance, they are saying, in effect, “Gee, folks, we’d love to help, but we can’t, so probably the best thing for you is to move along to some other city. And here’s all your belongings.”

Which ignores, among other points, that there are very workable solutions that not only come with instructions, but funding.

Through the Department of Veterans Affairs.

On any given night, approximately 600,000 to 700,000 Americans are homeless. Obviously, this number is hard to pin down, since it includes men, women, and children; and, homeless folks are sometimes not anxious to be counted; evictions, citations (which few can pay) influence the decision to stay lost, along with the prospect of having your personal property confiscated or thrown away.

However, out of all gloomy news we find a few rays of hope.

Because, as it turns out, about one-third of the homeless Americans are Armed Forces veterans; of these:

● 89% have received their Honorable Discharge

Some have substance abuse problems; some suffer from some form of mental illness, including PTSD.

So for at least 150,000 to 200,000 homeless Americans, we have straightforward and tested remedies already in place, including

● Shelter and two-year transitional housing funded through the Grant and Per Diem Program,

● Long-term care through the Domiciliary Care for Homeless Veterans Program, and

● Skills programs such as the Compensated Work Therapy/Veterans Industries Program.

Also, the Department of Veterans Affairs operates VA Healthcare facilities in all 50 states, where veterans can receive low-cost or no-cost treatment and medications.

So, while the solution to the questions of dealing fairly with the entire national homeless population may be beyond our resources, we do have the resources to immediately begin alleviating a third of the suffering.

However. A few “Howevers,” actually.

Beginning with the funding. Because while many of the Republican members of the U.S. House and Senate thump the “We Support Our Troops” drum when it’s time to raise some money or hustle some votes and laud these troops—quite rightly—as heroes, they then vote against measures that would actually help veterans and active duty service persons.

Which seriously cripples funding available for supporting the veterans facilities we already have, or expanding them to include more vets.

IAVA, the Iraq and Afghanistan Veterans of America, rates members of both houses by their votes on veterans’ issues; the web site is listed below.

From their voting record, local “We Support Our Troops” Representatives who choose, literally, to leave our heroes out in the cold by consistently voting against legislation to help veterans include Ken Calvert, Darrel Issa, Tom McClintock, Ed Royce, and Dana Rohrabacher, among others.

So here we have a doubly tragic and shameful scenario: not only are we maltreating people who happen to be in less fortunate circumstances than some of the rest of us, in contradiction of basic civility and humanitarian values (not to mention a host of religious teachings—Matthew 25:40 comes to mind here---but we are performing a public nose-thumbing and repudiation of the promises we made toward people we laud elsewhere as heroes, the men and women who have chosen to serve our country.

But short of getting the “Support Our Troops” Congress members to actually do some real supporting there is a great deal to be done immediately, using resources we already have.

Beginning with our Congress members. All of them have staff members who are handsomely paid (39th CD Congress member Royce, for example, pays his Chief of Staff nearly $170,000 per year and has a staff payroll of about $1 million); Representative Rohrabacher is even more generous.

None of these staffers seem to be overly burdened with chores in their district offices.

So, what is stopping these folks from making the rounds of the homeless camps and gathering places, looking for the vets?

Equip the staffers with notebook computers linked to the VA databases, to verify the vets’ identity.

From here it shouldn’t be all that difficult to arrange shuttle services to the VA centers, where the vets can get the assistance they need and have earned.

It would seem to be a very workable arrangement, where everyone concerned wins something: the homeless population is reduced greatly, local cities and police departments can redirect their attentions to more important tasks, and a lot of the rest of us can hold our heads up a little, knowing we have made a small payment on the debt we owe our veterans.

The question is, what are we waiting for?

(John MacMurray is a retired La Habra teacher and former Democratic candidate for State Assembly. He blogs at LAProgressive.com where this column was first posted. A must visit. LA’s most important Progressive voice.)