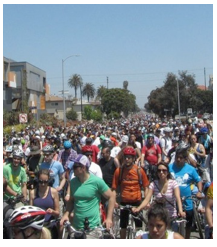 LA OBSERVED - The sixth CicLAvia on Sunday went from downtown to the beach at Venice. Drawing the route out for 15 miles across the city may have lured more thousands, but apparently posed some new challenges. There were a notable number of traffic jams mentioned on my Twitter feed, a noticeable crowding of bike riders at cross-street stops, and an overload at the Culver City Expo Line station of people trying to get back home at the end of the day.

The 15-mile route apparently caught some people unaware that Los Angeles is a big place — all the CicLAvias to date have still touched only a small slice of the city.

Many fans are loath to say anything negative about CicLAvia. Those who take part every time basically love it. For some, it's important for whatever reason to believe the city's culture is a struggle between enthusiastic urbanists and the majority who don't get it, and thus CicLAvia is "the good guys" and not to be critiqued.

Then comes USC physics professor Clifford V. Johnson, as vocal a CicLAvia fan, bike rider and transit user as there is, and whose real-world observations of the city I value. He enjoyed today's CicLAvia as always, and hesitates to criticize, but nonetheless he has some constructive suggestions.  (Read the rest … including Professor Johnson’s advice … here)

(Kevin Roderick is editor and publisher of LA Observed) –cw