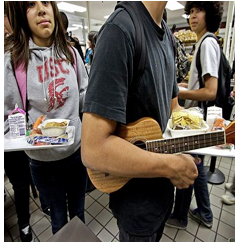 EDUCATION POLITICS - Magnet Schools.  You’re in good company if you don’t feel quite solid in your understanding of what makes a Magnet School magnetic.  Seemingly most parents, even those with children enrolled in one of these, are confused by the concept.

I’ve heard it communicated variously, as implication to flat-out assertion, that:  Magnets are a different kind of school, separate or apart from other schools, with different admissions processes, havens for the elite, special; rarified, giving only the best to its lucky jackpot matriculants, so inequitable in essence as to justify Charter School inequity excess, arbiter of the future, a bastion of those in the know, unattainable by mere mortals, who are instead resigned by fate to be surpassed in the lottery of educational opportunity.  Etc.

It’s all nonsense; these schools are none of the above.  From ‘first principles’, they are an educational program designed to “magnetically” attract children and families for some reason other than automatic enrollment “at the end of the block”, in the neighborhood, or “district” school located there.

By attracting children not simply on the basis of residence alone, it becomes possible to establish an educational program composed of children who do not necessarily live right next door to where the school resides.

The form of that attraction, the ‘theme’ of the Magnet School, may vary by virtue of offering different attractants to appeal potentially to different folks (e.g., classes in science, performing arts, designed for the gifted).  But the goal is to coax people to a school located away from their immediate neighborhoods, precisely for the ulterior motivation of “mixing up” the ethnicity of the population a bit.

This has been one (of multiple) experiments in addressing the practical problem of how to achieve de-segregation.  Because while the Supreme Court clarified in the 1960’s that separate schools could not be said to be equal, the problem of how to actually achieve parity – racially, socioeconomically, opportunity-wise —  persists.  To this day socioeconomic segregation remains the elephant in the room of our democratic House of State.

In Los Angeles, perhaps in every large school system, Magnets provide the collateral benefit of parsing a comprehensive or otherwise larger, unvariegated school community, into subsetted pieces that make the large whole a little more comprehensible.

In some, but not all, schools, teachers may be hired for and assigned exclusively to magnet school pupils, delineating the subschool and sometimes furthering an unfortunate misconception of privilege.

To the extent that a subsetted school is beneficial especially within a larger school, affording its pupils the benefits of both a large school’s diversity of society and course offerings and a small school’s closely-defined, tighter community, Magnets can be understood to be highly successful and desirable.

This attractiveness has generated a reputation for excellence that is in some cases well deserved, but also serves to sustain the program’s racial diversity.  In generating interest beyond the limits of the program’s capacity, it is possible to maintain a desegregated spectrum of racial proportions precisely because the community is limited.

An unfortunate collateral consequence of limiting a program’s size to sustain its purpose of desegregation, is the appearance of elitism, particularly when a given Magnet program is especially excellent.

But elite is defined as ‘the best’, whether as individuals or a program itself.  And Magnet programs are simply successful, not Best, inherently or otherwise.  What Magnet programs are, is oversubscribed; that’s what makes them work as a desegregation tool.  Again, their very success paints them with a rep for elitism.

And while an argument could be made for these means justifying a valuable desegregation-end, it is hard to extend such justification for, say, the elitism of Charter School selection practices, a criticism sometimes leveled at these programs in comparison.

So because the game is to generate buzz surrounding a Magnet School, there is in place a rococo system that whips parent’s interest to a frenzy in Magnet Schools, thereby sustaining their desegregation utility.  It is the euphemistically named “Choices” brochure/online process, and is responsible for an absolutely untoward degree of anxiety in Los Angeles.

The system is self-selecting inasmuch as it takes a certain special sort of commitment to game the magnet lottery for its annual ‘consolation’ points from outside a Magnet School and also self-serving as magnet ‘replacement’ points are conferred while migrating between systems, Elementary to Middle; Middle to High School.

The system serves its purpose and renders false enemies behind every corner.  But there is a difference between wannabes with an equal chance at their desire and without demerit for nonselection, however much appearance might suggest to the contrary, and some other competing lottery systems with very different ends in sight.  (More on that to come in Educational Politics 101, Charter Schools.)

A Magnet School is simply a collection of pupils desegregated by race, selected randomly from within their ethnic group, sustained by a system of limited enrollment.  Bastions of elitism, privilege or of deep educational panacea these schools are not.