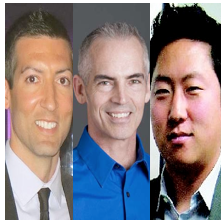 LA ELECTIONS 2013 - On Thursday January 30th, 9 of the 13 candidates for City Council District 13 were center stage at the Atwater Avenue  Elementary School, attended by a standing room only crowd of around 150.

It was part of a grueling series of events where the huge field of candidates are trying to get known in the last few weeks prior to the March 5th elections. The event was hosted by the Atwater Village Chamber of Commerce.

The prize? A newly reshaped Council District 13 that is the product of back door deals between former Council President Eric Garcetti and current Council President Herb Wesson.  And what makes it interesting is that the redistricting was really to help Garcetti's mayoral hopes rather than the usual body-swapping to guarantee some termed-out incumbent politician a 'safe' seat.

As of mid-January, a poll released on Mayor Sam's Sister City indicated that there was no clear leader for the seat, although Villaraigosa Deputy Mayor Matt Szabo had the name recognition lead, besting Garcetti's key staffer Mitch O'Farrell by a significant margin. Of course, that poll (done by a paid consulting firm) may be flawed, since I find it personally hard to believe that “Mayor Villaraigosa, who has endorsed Szabo in this race, is very popular -- with a 69% favorable rating overall and 79% favorable among voters undecided in the council race."  He wishes.  So take this poll with some big-time reservations.

Also of note, the Northeast Democratic Club meeting in late January failed to endorse any candidate for this seat.

With this background here are the nine Atwater Forum candidates with their self-descriptions from handouts and their two minute opening statements at the Forum.  I am also providing some very brief initial thoughts as I watched them, in alphabetical order:

John Choi - Worked for the Los Angeles County Federation of Labor, and touts his one year stint as an LA City Public Works Commissioner. Super high energy, light on specifics as to his background.

Sam Kbushyan - A local resident, part of the East Hollywood Chamber of Commerce, and  a Board member of the Northeast East Democratic Club.. High energy and obviously committed to the district, unclear as to resources.

Emile Mack - A Commander of the Los Angeles City Fire Department (LAFD) with 34 years of service.  Very experienced, seemed a bit unclear as to what his vision is for the district.

Robert Negrete - A local resident, who lists working for an LA Mayor, a Council Member, a Council President, and a State Senator, without identifying any of them on his literature.  Smooth, and clearly a political insider, with ties to Padilla and Polanco. Given funding, a contender.

Mitch O'Farrell - A resident of Glassell Park, helped form the Glassell Park Neighborhood Council, and a key staff member of Eric Garcetti in CD 13 for some 10 years.  Clearly the most knowledgeable about the district and its issues,   focused and in the hunt.

Josh Post - A California Department of Justice Attorney, worked with Hahn's BEST aftershool program, and an avowed environmental activist. Very good on law enforcement as expected, strong on environment, a little light on the insides of the City.

Jose Sigala - President of the Echo Park/Elysian Neighborhood Council for 6 years, and some 20 years of service in state and local government, without identifying exactly who he worked for in what capacity.  Clearly a City political insider (he worked for Councilman Alarcon until late 2011), Sigala along with O'Farrell seems most knowledgeable about the District.  Definitely a contender.

Matt Szabo - Son of a LA City firefighter, worked with Mayor Richard Riordan, Wendy Gruel, and the last 5 years as a Deputy Mayor for Villaraigosa. Between his experience with two mayors and Councilwoman Gruel, Szabo defines the phrase political insider.  And his experiences with the City Budget as Deputy Mayor give him a unique perspective.  My political junkie friends tell me that his well funded campaign will be the one to beat.

So, smart money gives the insiders the nod to get into a runoff, since they are already a part of the system and both know how elections work as well as have access to funds that the rest of the field may not.  That would favor Choi, Negrete, O'Farrell, Sigala and Szabo.

What is fascinating to me is that this is really a race --  to see who gets the two top spots and winds up in a runoff.  It should be interesting.

In the meantime, if any of the candidates does anything spectacularly newsworthy, I'll do a follow-up.

(Tony Butka is an Eastside community activist who has served on a neighborhood council and has a background in government.)