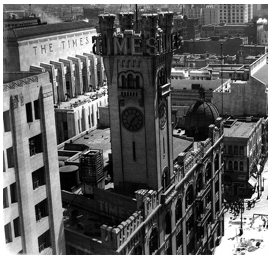 MEDIA - The saddest part of the bankruptcy cloud being lifted from the Los Angeles Times, the Chicago Tribune and the other once-strong newspapers owned by the Tribune Co., is that so few people cared.

That is yet another measure of the decline of the newspaper as part of American life. Once, newspapers were voices of the community. But the Internet drained away advertising, circulation declined and newspaper owners didn’t have the heart or brains to fight back. By the time a vulture financier, Sam Zell, led the Tribune Co. into bankruptcy, the newspaper game was becoming a loser.

Shortly before New Year’s Eve, the day the company emerged from bankruptcy, I visited the Times building where I had worked for 31 years to meet a friend and former co-worker for lunch.

Although she has been a well-known and respected reporter there for many years, the guard couldn’t find her name in the computer phone directory. He said Tribune had just installed a new system. Don’t worry about learning it, I said. They won’t own the place much longer. You’ll have to learn a new system. He agreed, speaking in the wry, expecting-the-worse manner universal among Times and ex-Times people.

My friend was surprisingly upbeat, enthusiastic about covering local congressional campaigns. On the way out of the restaurant, we ran into another reporter whom I had once helped get a job at the Times. I was glad to see he continued to be excited about digging up dirt on local government.

Afterward, I thought about such reporters, their value to the community, and how much newspapers are losing as the number of these journalists diminishes.

What they do is far different from the journalism practiced on the Internet by a media that, in the vision of their boosters, constitute the future of American news.

For the most part, the kind of journalism we see online aggregates news, putting together stories from other sources, cutting them down, throwing in provocative tweets and dumping it all onto websites in a mélange gauged to draw more clicks than the competition.

A few organizations employ reporters, but not enough of them. Harried bosses drive their staffs in a frantic hunt for click-inspiring news. This leads to mistakes, which are not considered a big deal in the Internet world. It also creates a low-pay sweatshop environment where reporters bail out as soon as something better comes along.

But Internet clicks don’t bring respect from the public.

Respect comes when smart people who are leaders in their communities provide insight and information and deal with reporters who know as much—and hopefully more—about a subject than they do, journalists who are experts in the policy and politics of what they are covering.

Respect goes to the reporters who sit through boring meetings, dig through endless records, and interpret the language of the bureaucracy. These people also experience the excitement of revealing a real scandal or the satisfaction of helping people otherwise ignored by government. They view their jobs as a career, a calling.

Respect is also earned by media companies that put resources into digging out the news. When I worked for the Los Angeles Times in its heyday, people in hostile communities talked to me because they had a grudging respect for a paper that sent reporters into the city’s poorest neighborhoods. The rich in Brentwood mansions talked to me too, as did schoolteachers, cops, big shot politicians, community rebels, emergency room nurses and many others who kept LA going.

As professor and “The Vanishing Newspaper” author Philip Meyer wrote in the American Journalism Review in 2008, “a newspaper’s most important product, the product least vulnerable to substitution, is community influence. It gains this influence by being the trusted source for locally produced news, analysis and investigative reporting about public affairs. This influence makes it more attractive to advertisers.” He added, “By news, I don’t mean stenographic coverage of public meetings, channeling press releases or listing unanalyzed collections of facts.”

Five years after Meyer wrote that, technological and intellectual advances are giving newspapers the tools to make their coverage more vital to their readers. The biggest advances in public affairs and political reporting last year came from three journalists who have brought great knowledge, clarity and experience in their fields to the presidential campaign and to policy disputes.

Nate Silver explains polls, public opinion and demographics in his New York Times blog. Sasha Issenberg, in his column on Slate and his book “The Victory Lab,” showed how the use of demographic, marketing, voting and other information shaped the Obama campaign. Ezra Klein explains policy in his Washington Post Wonkblog. Their reporting, clear writing and brilliant use of data have influenced the coverage by other media as well as shaping the political and policy debate.

These are examples of what can be done by journalists with imagination, knowledge and experience, working for publications committed to excellence.

I happen to be writing about reporting public affairs and politics in this particular column because that’s what I know. But the same is true in culture, entertainment, sports and many other areas. Any sports fan who read the New York Times multipart series on Yankees catcher Russell Martin last year knows what I am talking about. It illuminated the skill required for this difficult position and the personality and character of the thoughtful and articulate man who plays it. The writer had to become an expert on baseball—and catching.

This can’t be done on the cheap. Newspaper staffs will not return to the size of a few years ago, but they can be filled with smart and dedicated reporters who are given the time to do a good job.

If that happens, maybe the Times and other papers will be treated with the respect they once deserved. Hopefully, Times readers will be able to again say we have a fine newspaper, one that we need every day.

(Bill Boyarsky is a journalist and blogs at truthdig.com where this column first appeared. Visit truthdig.org for other prominent writers like Robert Scheer, Amy Goodman and Chris Hedges.) Photo: AP/Dave Collins