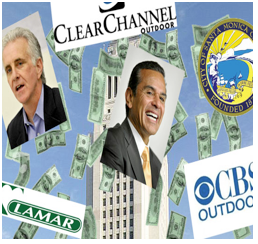 BILLBOARD WATCH - As in the past, deserving recipients greatly outnumbered the available awards.  And some of the winners of the 1st Annual Ban Billboard Blight Awards could easily have repeated if we hadn’t limited the awards to first-time contenders.
At the risk of appearing overly negative, we again have given these awards to individuals, companies, and others for less-than-admirable deeds.  But that doesn’t mean the city’s visual environment didn’t have some honorable defenders, among them several elected and appointed officials, as well as community activists whose good deeds go unsung but certainly not unappreciated.
The Clifford Irving Award for the year’s most creative hoax goes to City Councilman Paul Krekorian, who answered a letter from a constituent named “Tracy” about digital billboards in his “Ask Paul” column in an online newspaper. Turns out that “Tracy” didn’t exist and her letter was fabricated by a member of the councilman’s staff.
The Noblesse Oblige Award for selfless public service goes to Clear Channel Outdoor, which warned that public safety could be compromised if the city forces digital billboards to be removed. In the past, Clear Channel has taken credit for helping to save Cahuenga Peak, catch the Grim Sleeper, and avoid “carmageddon” on the 405 freeway, among other things, by posting messages about these subjects on its digital billboards.
The Oedipus Rex Award for self-inflicted blindness goes to Lamar Advertising, which apparently did not foresee (or maybe just didn’t care) that placing a billboard ad for a San Fernando Valley strip club in an upscale commercial area of Bel-Air would raise a stink with residents. Which it did.
The T.S. Eliot Award for doing the right thing for the wrong reason (or the least compelling reason) goes to the Santa Monica City Council, which decided to shelve a plan to put digital ads on the sides of its Big Blue buses. The plan for the buses that have a number of routes in L.A. as well as Santa Monica was widely panned over concerns about visual blight and potential hazards to motorists and pedestrians, but the reason given for the City Council’s action was that projected revenue didn’t merit the expense of installing the signs.
The Rodney Dangerfield Award for the governmental body getting the least respect goes to the City Planning Commission, which approved a revised citywide sign ordinance back in 2009 only to see it come up for final approval in 2012 by the City Council’s PLUM committee with a number of major changes and additions that weren’t even discussed by commissioners. This fact was never mentioned by committee members, even though the City Charter requires any substantive changes in City Planning Commission actions to go back to that body for approval.
The Charlotte Brontë ‘Ingratitude’ Award goes to Mayor Antonio Villaraigosa, who said the city charter should be amended to take power over civil cases away from the City Attorney and allow the City Council to retain its own legal counsel. No mention was made of the fact that the City Attorney’s Office, despite serious budget cuts, has gotten hundreds of illegal supergraphic and other signs taken down, and collected $8.2 million to date from sign company scofflaws, with more enforcement cases pending.
The Equus Mulus Award for stubborness goes to the Department of Building and Safety, which refused for months to release the results of a citywide billboard inventory and inspection program first authorized back in 2002. It finally relented only after being sued by a USC graduate student under the California Public Records Act, but charged her for the database publicly posted just a few days later on the department’s website.
And finally, The Johnny Mountain Weather Award goes to Clear Channel and other billboard companies that have rained money on City Hall in the form of payments to an army of lobbyists large enough to defend a small country.
(Dennis Hathaway is the president of the Coalition to Ban Billboard Blight.  He can be reached at: [email protected])
-cw
CityWatch
Vol 11 Issue 2
Pub: Jan 4, 2013