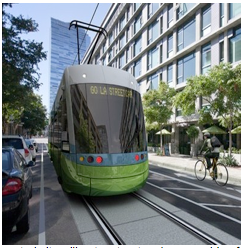 OUT OF THE FRYING PAN - This past year saw an election cycle in which democratic voting rights were in question to a very troubling extent, despite claims by proponents of voter ID laws and limitations on early voting –however implausible–that they were concerned with the integrity of democracy. At least Californians could take some comfort in the fact that the state defied national trends and made it easier to register, not harder (or impossible) to vote.
So for me, as an Angeleno, it was both jarring and eye-opening to hear the recent debate surrounding a mail-in election on new taxes to pay for a streetcar loop in downtown Los Angeles. I say jarring and eye-opening because some of the arguments combined a modern confusion with a very, very old prejudice about democracy. It was a reminder that we should never assume democratic principles are secure and beyond doubt.

A little background is in order. By the close of voting a few weeks ago, residents of a specially-created downtown district had approved the new tax assessment. So if – and only if – additional federal funds are won, the central city will get a streetcar loop reaching from First Street to the Staples Center.
The questions about democracy arose in this case because some landlords and commercial property owners didn’t just criticize the streetcar plan or tax policy, but argued that the wrong people were deciding the issue.
Carol Schatz, who actually sits on the board of the group that promoted the streetcar, voiced their criticism. The president of the Central City Association, Schatz put it this way in an appearance on Which Way, LA.?:
“The people who are voting are not paying the vast, vast majority of the assessment that’s going to be voted on. Commercial property owners are paying for that, and most of them don’t live in the downtown area. So people who are residents, in apartments and so forth, are going to be voting where they have no skin in the game. They’re not really paying for it. Easy vote to make.”
Let’s put aside two very salient retorts here — that many residents are property owners, and that even tenants will almost certainly end up paying the tax indirectly in the form of higher rents.
Schatz’s property owners really had two arguments. One was that there’s something untoward about citizens deciding to spend public funds for a public good instead of somehow “paying for it” themselves. The other was that  property owners in a jurisdiction have some sort of special claim to a political say there regardless of where they live.
First, let’s consider the modern confusion, which is one between the values of democracy and the values of finance. The use of the expression “no skin in the game” gives away what we’re dealing with. “Skin in the game” is investor talk for having your money at risk. And putting your money at risk is supposedly the prerequisite for shaping and profiting from a deal. (Unless you’re a bank trading in mortgage-backed securities, but that’s another story.)
“Skin in the game” is part of a mental universe of private interest, personal profit and gamesmanship. In this world, “money talks” is a point of pride, a principle, not a critique. But these are not the values that should be at work when the public decides about something like the downtown streetcar. Here, the relevant values should be equality, public interest and concern for the common good. Citizens get to decide, on equal terms, about public policy because in a democracy they are the final arbiters of what’s good for the city, the state or the nation, not because they came to the table with the most chips – or the most “skin.”
Next, let’s consider the ancient prejudice: that there are some people who have a special claim to political power simply because they own property. In the US, the searing struggles to extend the suffrage to non-whites and to women tend to cause us to forget the difficult fights to abolish property qualifications for voting. It’s not just that at one time you had to have a certain amount of money to vote.
In England, before the Reform Bills, there were actually districts, “pocket boroughs,” in which the owners of particular properties effectively chose representatives to Parliament. And the British conservatives of that era thought this was entirely right and fitting.
The idea that nonresident commercial property owners deserve some particular say in downtown tax and transportation policy is certainly a grandchild (probably patrilineal) of the justification for pocket boroughs and the exclusive rule of property.
Now, I’m not saying that certain downtown property owners want to take away some people’s voting rights. Or that they want to bring back pocket boroughs. I doubt they do. But I am saying that these kinds of muddled, pre-democratic sentiments have to be taken seriously and rebutted in a year when a substantial portion of the American right has devoted itself to making it harder for people who are poorer and more transient to vote.
(John Medearis teaches political theory at the University of California, Riverside and has written two books on Joseph Schumpeter. This column was posted first at FryingPanNews.org)
-cw
CityWatch
Vol 10 Issue 102
Pub: Dec 21, 2012