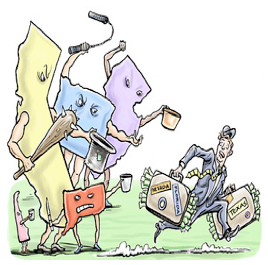 THE ECONOMY - With their enthusiastic backing of President Obama and the Democratic Party on Election Day, the bluest parts of America may have embraced a program utterly at odds with their economic self-interest. The almost uniform support of blue states’ congressional representatives for the administration’s campaign for tax “fairness” represents a kind of  bizarre economic suicide pact.