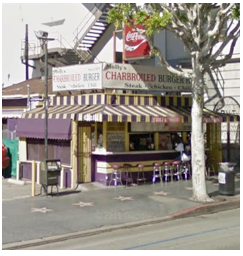 LA WATCHDOG - The Vine Street Tower, a star crossed development in the heart of Eric Garcetti’s Hollywood, has been stinking up the neighborhood since October of 2006 when the now defunct Community Redevelopment Agency (the “CRA”) overpaid for the vacant lot at 1601 North Vine from the politically attuned Ullman family for $5.45 million, a 34%, $1.4 million premium to the appraised value of $4.07 million.
This $57 million development of a LEED certified, eight-story building with a multilevel underground garage for 200 cars was designed to have 108,000 square feet of Class A office space to serve the entertainment industry.

At the same time, the Know-It-Alls from the CRA and City Hall were crowing about the 500 permanent jobs that would be created, the 350 construction jobs and the related project labor agreement, and the transformative effect this signature development one block south of the historic intersection of Hollywood and Vine would have on all of Hollywood.
However, after six years, this 18,200 square foot lot is still nothing but a parking lot.
Even Molly’s Hamburgers is history, as the CRA approved an exorbitant $1.1 million settlement with the Molly’s owners, bringing the total purchase price for this patch of asphalt to over $6.5 million, a 61% premium to the appraised value.
This premium does not include the value of the Ullmans’ right to operate the underground garage in the new building or the profits they have derived by managing the existing parking lot over the last six years.
Despite this lack of progress, on November 29, the Governing Board of CRA/LA, the successor to the CRA, approved a 90 day extension of the Development and Disposition Agreement with the current developer, Workers Realty Trust II, LP, a Chicago based closed end real estate investment fund.
But Workers Realty does not appear to have the necessary qualifications to develop this property.
According to its web site, Workers Realty does not have any investments in office buildings nor does it have operations in Hollywood or even in California.
Furthermore, this $124 million fund may not have the wherewithal to finance this development since it took a $25 million beating on its investment in the bankrupt Albuquerque Studios, an operation that was managed by the ethically challenged Hal Katersky, the initial developer of the Cesspool on Vine until he was shown the door in August 2011, only five months after the City Council approved his arrangement with the CRA.
Instead of developing and managing this property, Workers Realty wants to amend the existing Agreement so it can flip the property at a huge profit, hoping to recoup its $4 million plus investment in Katersky’s failed venture.
In particular, Workers Realty wants the right to buy the site at “fair market value,” free and clear of the CRA requirement that 60% of the tenants be involved in the entertainment industry and the Ullmans’ right to manage the underground garage.  In return, Workers Realty would waive its right to purchase the property at its “reuse value” of $825,000 that was established by the CRA through convoluted logic.  This represents an 85%, $4.6 million discount from the original purchase price.
But who determines the fair market value, especially since the property has been zoned for an eight story Class A office building in an area that is attracting billions of dollars of investments from sophisticated and politically active investors?
Does CRA/LA rely on an independent appraiser? Or is it just looking to recover its existing investment?
The Cesspool on Vine has been mired in controversy, especially when it was revealed that the CRA had been snookered by the sellers who just happen to be friends of Eric Garcetti.  The City Council then approved the Development and Disposition Agreement on March 9, 2011 with Hal Katersky, the undercapitalized, inexperienced, and ethically challenged developer sponsored by Eric Garcetti on the floor of the City Council.
This was in spite of an 1,100 word expose in The Los Angeles Times that outlined allegations by the owners of Culver Studios of “fraud and embezzlement” on the part of Katersky, the bankruptcy of Katersky’s Albuquerque Studios, issues of securities fraud in Oklahoma, and stiffing the city of New Orleans by defaulting on a lease.
Katersky also lied to Herb Wesson’s Housing, Community, and Economic Development Committee when he said he was not involved in any litigation, contrary to earlier comments by a credible senior CRA executive.
Today, there is too much controversy in the Hollywood latrine, whether it is the Cesspool on Vine, the Millennium Project that will overwhelm the intersection of Hollywood and Vine, the contentious litigation involving the poorly designed Hollywood Community Plan that relies on out of date information, and the CRA’s $30 million loan to the soon to be defunct Cirque de Soleil production located at the Hollywood and Highland complex.
Rather than continue to mess around with Workers Realty, an apparently incompetent investment fund that has not lined up an anchor tenant or arranged the necessary financing since it tossed out Katersky in August of 2011, Council Member Eric Garcetti needs to step up to the plate, admit his mistake, terminate the arrangement with Workers Realty, and finally clean up this cesspool by forcing the sale of 1601 North Vine to the highest qualified, all cash buyer.
After all, Eric, this is our money.
(Jack Humphreville writes LA Watchdog for CityWatch. He is the President of the DWP Advocacy Committee,  the Ratepayer Advocate for the Greater Wilshire Neighborhood Council, and a Neighborhood Council Budget Advocate. Humphreville is the publisher of the Recycler Classifieds -- www.recycler.com. He can be reached at: [email protected])
-cw
CityWatch
Vol 10 Issue 98
Pub: Dec 7, 2012