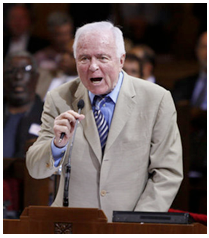 GUEST WORDS - It was a moment of truth. History was being made right before our eyes when the public face of the Los Angeles civic establishment was dressed down by a pipsqueak like City Council President Herb Wesson.
Richard Riordan, the popular former mayor who 40 years ago had helped bring down the city's arch-conservative oligarchy and clear the way for Tom Bradley to win election to his first of five terms, stood at the lectern before the City Council pleading for sanity, for fiscal responsibility.

It was the day last month when they were voting to seek higher sales taxes to stave off the day of reckoning for their reckless spending and failure to face the city's economic reality.
Genuine reforms to reduce the cost of city pensions - not a regressive tax that punishes the working poor and chases away business - are what's needed, Riordan said.
Don't risk bankruptcy, don't destroy the city, he pleaded, fix it.
Little man that he is, Wesson couldn't keep from gloating condescendingly that the person who for so long was the epitome of wealth and influence was now just a vulnerable old man who had made a terrible miscalculation in trying to put a pension reform measure on the May ballot.
"Why didn't you fix it when you were mayor?" Wesson sneered.
When Riordan tried to respond, Wesson cut off his microphone and scoffed triumphantly, "No, there's no back and forth. I get the last word."
After several seconds, he added with a smug grin, "This is our house."
What Eric Garcetti as council president had laughingly called "a temple of democracy" was now "our house." There was not even the pretense of a City Hall committed to serving the public, but a privatized enterprise engaged in self-service for the benefit of career politicians and the special interests who buy them, public be damned.
Ten days after his appearance before the council, Riordan waved the white flag of surrender and abandoned his ballot measure. To be sure, it was at best only a partial solution to the city's fiscal woes. The campaign for it was ill-conceived, without outreach to the business community or a public conversation to drum up support, and without the commitment of adequate funds to get a quarter of a million signatures in a short time period.
Unions disrupted the signature-gathering drive. The architects of the pension reform plan - Riordan, Eli Broad, David Fleming - were mocked as the "Billionaire Boys Club." The man who once promised to be "tough enough to turn LA around" was dismissed as a paper tiger.
It was Riordan who stood alone in public to try to fight the good fight, while the rest of us sat on our hands on the sidelines watching as if what was going on had no consequence for us.
It doesn't have to be this way; the politicians, political operatives, influence peddlers and profiteers don't have to win. It's up to you - only you can save LA.
(Ron Kaye is the former editor of the Daily News and founder of the Saving L.A. Project, SLAP. Contact at [email protected]  This piece was posted first at DailyNews.com)
-cw
CityWatch
Vol 10 Issue 97
Pub: Dec 4, 2012