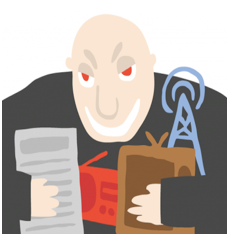 MEDIA POLITICS - The Federal Communications Commission is charging ahead with its plan to let Rupert Murdoch gobble up more media outlets. And we've just learned that the FCC may try to hold a secret vote to allow more media consolidation in the US — possibly within the next two weeks.
Murdoch has set his sights on the Los Angeles Times and the Chicago Tribune — the major papers in the nation's second- and third-largest cities (where, incidentally, he already owns several TV stations … and, of course, the Tribune also owns KTLA TV in Los Angeles).

And get this: The FCC is trying to change the rules so Murdoch can get exactly what he wants. Worse, FCC Chairman Julius Genachowski is hoping the agency can pass these changes without you noticing.
Murdoch's media grab would be illegal under the current rules. But Chairman Genachowski is pushing the other commissioners for changes that would translate into a giveaway for Rupert and other media barons.
Here are five things you need to know about the FCC's giveaway to big media.
1) It will give Rupert Murdoch more power. If the FCC guts its ownership rules, nothing will stop Murdoch and other media giants from getting even more control over your news.
2) It will make our media less diverse. Women own less than 7 percent of all broadcast outlets, while people of color control only 3.6 percent of all TV stations and just 8 percent of all radio stations. Most of the TV stations women and people of color own fall outside the top four in each media market. As it happens, the FCC proposal targets stations outside the top four — which means that ownership levels for women and people of color would plunge even further under Genachowski’s plan.
3) It will create local media monopolies.  One company will be allowed to own a daily newspaper, two TV stations and up to eight radio stations in Los Angeles. That one company could be your Internet provider, too.
4) It will mean less news for local communities. Less competition means less overall news coverage.
5) It goes against the will of the people. Genachowski’s plan is essentially the same media consolidation proposal the Bush FCC tried to force through in 2007. The Senate voted to repeal it. A federal court overturned it. And 99 percent of the public comments the FCC received opposed it.
Tell the FCC: no more media for Murdoch.
(Josh Stearns is Journalism and Public Media Campaign Director at Free Press where this piece was first posted.)
-cw
CityWatch
Vol 10 Issue 96
Pub: Nov 27, 2012