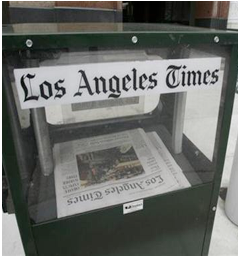 MAILANDER ON … POLITICS - "I can't even imagine my own 11-year-old wandering an empty City Hall at almost midnight," the mother of a sturdy and secure 11-year-old Girl Scout told me.  "She would have been terrified."
And if you have any kind of a nose for news, you know that describing this terror would have made for a really compelling story.  But perhaps the only thing equally terrifying to the poor plight of Cheyenne Alarcon is the degree to which LA media went moribund in the wake of the most recent disclosures about her Friday evening away from her mother, Public Works Commission President Andrea Alarcon, who not only is charged with temporarily abandoning her duty as a mother but has also sworn an oath to uphold the public safety concerns of the City of Los Angeles to the best of her ability.

When it was disclosed that local law enforcement had brought a prospective child abandonment charge against Commissioner Alarcon, for abandoning her daughter to the mercies of an empty City Hall late two Friday nights ago, local media accepted the facts as presented--and then split the scene of the would-be crime as fast as any accessory might.
Rumors flew in email even while Commissioner Alarcon was pledging to undergo an undisclosed therapy--for what ailment, nobody knows.  And well-compensated local mainstream media aren't asking tough questions.
In fact, when the Mayor said that Commissioner Alarcon didn't need to resign, local media swallowed it completely, rather than ask tough follow-up questions.
It is understandable that what's left of the City's Eastside Latino Machine hopes to sweep the Alarcon charges under the rug as quickly as possible--as they did with the first (or second, or third) Villaraigosa extramarital affair.  It's no secret that relations have occasionally been strained between the flailing heir of that machine, Mayor Antonio Villaraigosa, and Alarcon's father, Councilman Richard Alarcon, even since before the time of the iffy appointment.  But local media have only been too obliging in holding up their corner of the rug under which things are swept.
To date, Alarcon has not performed a public mea culpa, and her father and the Mayor have been unwilling to entertain questions about either the incident or Alarcon's fitness to hold such a powerful, well-compensated position in civic government.  But that is consistent with their behavior since the LA Times' own time of troubles.
Nobody questioned the fitness of Alarcon for an enormous public service position when she was nominated to the post at the tender age of 31 as the mother of an eight-year-old.  Even David Zahniser, a formidable investigative journalist, wrote an enormous puff-piece on her behalf just last year, a scant five months before her drunk driving and child endangerment charge.
L'affaire Alarcon has made obvious even to those who tuned out the Times long ago that It's become the style of the beleaguered fishwrap to oblige City Hall as much as possible, reporting only what the police blotter obliges them to, rather than what they are able to.  Fishing for stories in the Inland Empire and along the 710 and 605 corridors, the Times has become a local joke when covering the goings on at the edifice catercorner to it on Spring Street.
The Times hiked its newsstand price last year, and another hike looms.  Broadcast media used to depend on the newspaper to break local stories; now local media complain that the paper is merely recycling local news, often without acknowledging the hard work of others.
But the Times has also looked the other way while key City Hall appointment after appointment has been quietly shown the exit doors.
Early in his Mayoralty, Villaraigosa was advised by Riordan crones that if he appointed people who were less than perfectly suited to their jobs, and perhaps even unfamiliar with Los Angeles's civic government, they would be obliged to remain completely beholden to the Mayor's office for piloting policy.  And thus the City suffered indignity after indignity: a Transportation chief from out of town (Gloria Jeff); a Planning chief who took up planning in midlife (Gail Goldberg); a haughty Cultural Affairs chief from Miami (Olga Garay); two Animal Services chiefs from out of town (Ed Boks and Brenda Barnette).  Commissioner Alarcon had served on one of the City's most malleable commissions, the Taxicab commission, and was not long out of Georgetown when she got the call from the Mayor.
Journalists at the Times overlooked this when she was appointed, instead choosing to play along.  And in the new local news environment, with no pecking order among journalistic sources, competing scribes often work harder at discrediting other competing writers than working their own leads.
Local government has learned how to take advantage of the absence of a unified front in the local journalism trade.  In one notable example, journalist Randy Economy (who especially works those target-rich freeway corridor beats that the Times likes to work as well) filed a Freedom of Information Act request on himself with Los Angeles County and discovered that a County Administrator was discrediting his work to others in local media.  At least one local blogger better known for obliging government workers and sliming his fellow scribes than for tough investigative pieces of his own bit on the administrator's black handed pointers.
Even years ago, when a reporter went from the LA Weekly or a community press to the LA Times, senior staffers would welcome him or her to "The Velvet Coffin," suggesting that a scribe might be able to lose their lively crusader passion once coming to the relatively cushy cubicles on Spring Street, where mopping up on other stories that had already broken was a lot safer and easier than breaking one's own.
But the new environment and the spread of news practitioners has created a more rapid cycle time for stories, such as Alarcon's might yet prove to be.
"They used to be three months behind me," one local scribe told me a couple of weeks ago, of the Times' penchant for standing on the legs provided by others.  "At least now they're stealing what I wrote six weeks ago."
(Joseph Mailander is a writer, an LA observer and a contributor to CityWatch. He is also the author of New World Triptych and The Plasma of Terror. Mailander blogs at www.josephmailander.com.) Photo credit: Dan Krauss
-cw
CityWatch
Vol 10 Issue 96
Pub: Nov 27, 2012