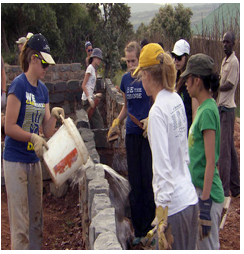 EDITOR’S NOTES - Just when you think things are going to hell in a handbasket along comes bright-eyed, fresh-faced proof to the contrary and hope is renewed.
Just when falling SAT scores and increasing school dropout rates have us questioning the country’s future, along comes Craig Kielburger … and 2 million other kids … raising their voices, raising dollars, building schools, helping their brothers and sisters and saving my planet. And hope is restored and faith is renewed. Not to worry.

This from CBS’ 60 Minutes: “The things that we're thankful for tend to come from people who devote their lives to something greater than themselves. Many folks come to that devotion late in life. But Craig Kielburger discovered it early. He was in seventh grade when the death of a boy changed his life. It was a change so profound that, through Kielburger, it has now saved and transformed lives around the globe. In that moment, 17 years ago, Craig Kielburger was struck by a profound truth -- something as important as changing the world can't be left to grown ups.
“Craig Kielburger: Kids are looking to get involved. They're searching for it. And in an era where, you know adults often are looking for meaning and purpose in their lives, kids also want to assert who they are, not just by the videogames they play or the peer groups they belong to, but by the contribution they make. And that's part of a youth self-identity in the world. And not only is it good for the child, my God, our world needs it.”
Jump in the renewal pool. Spend 11 invigorating minutes with Craig and some of his kids. The planet is in good hands after all. (60 Minutes link)
●●●
THE PLANET - We got a lot of response to Chris Hedges ‘Apocalypse’ piece on the World Bank report “Failure to Respond and the Planet Will Continue to Warm to Disastrous Levels.” Among them, this reminder from planning maven Dick Platkin reminding me … speaking of failure to respond … of what LA’s City Council did with this crisis issue: Agendized it. Received it. Filed it. (Here’s the Council File link)
No one apparently feeling the global heat at LA City Hall.
●●●
THE LIEMERT PARK HUB SNUB - As TV’s Tavis Smiley says, “It’s an old story.” He’s talking about people of color in LA getting ‘short shrift.’
For black Angelenos the short shrift reminders just keep on coming. Wanna store the space shuttle Endeavour in LA. Terrific. Let’s put it in South LA and chop 400 South LA trees down to get it done.
Now comes the Crenshaw rail line. Promised as a crucial link connecting South LA the City’s business hubs. Instead, say folks in South LA, it looks like it’s going to bypass Leimert Park … the heart of many feel of LA’s black culture.
The New York Times tells the story in detail at the top of the CityWatch front page. Check it out.
(Ken Draper is the editor of CityWatch. He can be reached at [email protected])
-cw
CityWatch
Vol 10 Issue 96
Pub: Nov 27, 2012