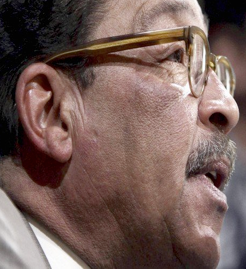 PASSIONATE POPULIST - If you took Herb Wesson and Paul Krekorian at their word — which would be foolish given these failed state legislators bald-faced lying and deceit — you would think that giving City Hall $215 million a year more would solve the never-ending budget crisis, pave sidewalks and streets, trim trees, restore full service at our libraries.
Wesson and Krekorian led the hard sell campaign for a one-half percent sales tax hike as if it were solely for “public safety,” to avoid the 500 layoffs Chief Charlie Beck threatens to carry out on cops without the money.

It’s all a fiction, a phony narrative scripted in the back rooms to claim it is a “general tax” increase requiring a simple majority to pass on the March ballot instead of the “specific tax” for public safety that they are promising to use the money for.
It’s all a lie, a big lie. The revenue will merely cover the next round of scheduled employee pay hikes that are coming due.
Watch these videos and see through the lies yourselves, and be sure to note that the normally loquacious Dennis Zine who wants to be Controller and the always pious Eric Garcetti who wants to be mayor voted against the tax hike without having the courage to speak during the debate.
They were joined by the mealy-mouthed Mitch Englander who represents the city’s only Republican district and Jan Perry who strengthened her mayoral campaign by speaking out sharply against this fraud on the public.  (Video’s here)
(Ron Kaye is the former editor of the Los Angeles Daily News and founder of the Saving LA Project, SLAP. He now writes at his own blog:  RonKayeLA.com.  Ron can be reached at [email protected])
-cw
CityWatch
Vol 10 Issue 92
Pub: Nov 16, 2012