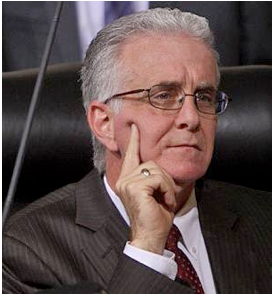 DIRTY TRICKS - Turns out, Tracy from Studio City isn't so concerned about digital billboards.
Nor does she even exist.

City Councilman Paul Krekorian's communications director acknowledged Friday he fabricated a letter for the councilman's monthly Patch column.
The letter from Studio City resident "Tracy" allowed Krekorian to defend his position on digital billboards and attack a recent Los Angeles Times editorial criticizing the councilman.
The unorthodox public relations approach marks another eyebrow-raising incident at City Hall over digital billboards, and comes weeks after city leaders admitted a lobbyist for the sign companies wrote a recent motion that could benefit the billboard companies.
In this week's "Ask Paul," a worried-sounding rea der named Tracy asks Krekorian to explain an unflattering Los Angeles Times editorial, which accuses Krekorian, who co-sponsored the sign motion, of doing the bidding of the billboard companies.
"I've always known you to be a good, honorable person and wanted to ask you if that's true," Tracy wrote to the "Ask Paul" column, which appears on the North Hollywood and Studio City Patch sites.
"Did you do their bidding and is the Times' allegation that the council members only `respond to power and money' true?"
"Tracy, thank you for your question," Krekorian replied in his column. "I did see that editorial from the Times and appreciate you allowing me to respond." In a lengthy reply, Krekorian goes on to refute claims made by the paper's editorial board.
On Friday, Krekorian spokesman Jeremy Oberstein defended the letter, saying he frequently crafts letters for the column based on "aggregations" of letters, email and comments received by the councilman's staff.
An hour later, he clarified that statement, saying the office in fact received no emails after the Los Angeles Times editorial ran.
Late Friday, he said the Tracy letter was an "aggregate of folks who called our office on a few occasions and of the general tenor from some people in the community."
He added that the Ask Paul column is posted online by himself, and answered by Krekorian.
He didn't respond to a question about whether Krekorian, who served on the Los Angeles Ethics Commission, knew the Tracy letter was an aggregate. (Read the rest of Dakota Smith’s report)
-cw
CityWatch
Vol 10 Issue 91
Pub: Nov 13, 2012