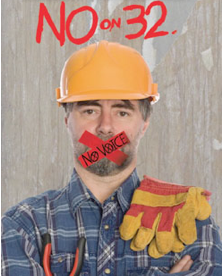 ELECTION 2012 - Don't be fooled by the lies being told by the proponents of Prop 32. It's called the "Paycheck Protection Initiative," but the only people protected by it are the super rich and the corporations that want to take over our state.

The backers of Prop 32 want to silence our voices by removing working people from the California political process. And they're stopping at no end to make it happen.
Take the millions of dollars in TV advertisements supporting Prop 32. Nothing these ads say is true. The ads claim that unions are taking funds out of our paychecks against our will and using them for political purposes. This is just plain false.
I'm a longtime LA City worker and proud union member. Just like my fellow union brothers and sisters, I pay dues because I want to be a union member and have the good job and benefits that go along with that. Having a union means having more protection from abusive employers and stronger bargaining power at the workplace. Having a union means having a better life.
Union dues are not used to endorse political candidates or propositions. Those funds come from a voluntary deduction to the SEIU 721 Committee on Political Education (COPE). Donating to COPE is up to you. No one forces you to do it. That truth is what Prop 32's rich backers don't want people to know.
I donate to COPE and I think every union member should. I believe in donating so that we can have the collective power to speak in elections with one united voice. We need COPE to defeat anti-union measures like Prop 32 and former mayor Richard Riordan's initiative to cut LA city workers' pensions. If we didn't have COPE, it would be so much easier for labor's foes to attack our union and our livelihood.
We need to maintain a voice in politics so that we can keep the middle class strong. Without a voice, big money will take over and destroy all unions so there will be only two classes--the rich and the poor.
When you vote on Nov. 6 or before, think about our power as working people. Think about our union. We are stronger together. We are the people; corporations aren't. And they can't have my voice. Vote no on Prop 32.
(Alan Peshek is a City of Los Angeles Storekeeper II, Chief Steward. This article provided by SEIU721.)
CityWatch
Vol 10 Issue 88
Pub: Nov 2, 2012